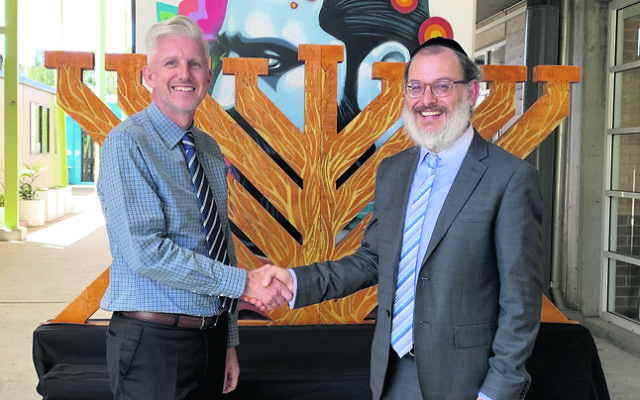 The old and the new: John Hamey (left) and Rabbi Yehoshua Smukler.

RABBI Yehoshua Smukler is returning to Moriah College, where he previously held teaching and administrative roles, to take up the role of principal in ­mid-2019.

The rabbi, who began as principal of Melbourne’s Yeshiva-Beth Rivkah (YBR) Colleges in 2010, will continue in his position there until mid-2019, giving the colleges time to find a successor.

Moriah College president Stephen Jankelowitz said Rabbi Smukler’s appointment followed an international executive search. “I am very excited by the appointment of an outstanding principal who will lead our school to greater levels of achievement and distinction, ensuring that our Jewish values and our deep love and connection to Israel, remain at the core of all that we do.

“Rabbi Smukler is an extremely impressive and visionary school leader, with more than two decades of educational experience, including over 10 years at Moriah College from 1999 to 2010. He understands the critical role that Moriah College has in the Sydney Jewish community and intends to uphold and promote our standing as a school of excellence,” he said.

Speaking to The AJN, Rabbi Smukler said his roles at Moriah – where he was a primary school teacher, assistant head of Jewish studies in the primary school, rabbi and head of middle school Jewish studies, and head of general studies – will be a welcome resource. “I’ll have to relearn the school’s culture, but I won’t be learning it from scratch.”

After visiting Moriah this week to familiarise himself, Rabbi Smukler said, “The future and success of Sydney Jewry is intrinsically intertwined with Moriah [where] there’s a beautiful, powerful, pulsating energy in the kids, the staff … modern pedagogy, cutting-edge innovation in education … a set of very powerful core Jewish values.”

He went on to describe current Moriah principal John Harney as “a mensch … values-driven, a man of extreme integrity”.

Paying tribute to their outgoing principal, the YBR board said, “Our VCE results are among the top in the state, and our graduates leave the school with a wealth of Torah knowledge and love for Judaism. This reflects Rabbi Smukler’s vision, expertise and dedication to our community and the fantastic support of his leadership teams.”

Born and raised in Toronto, Canada, Rabbi Smukler came to Sydney in 1995 during his final two years of rabbinic training and recalls being introduced to his wife Laya on the same day he was bestowed with rabbinical smicha (ordination). “It was a good day.”