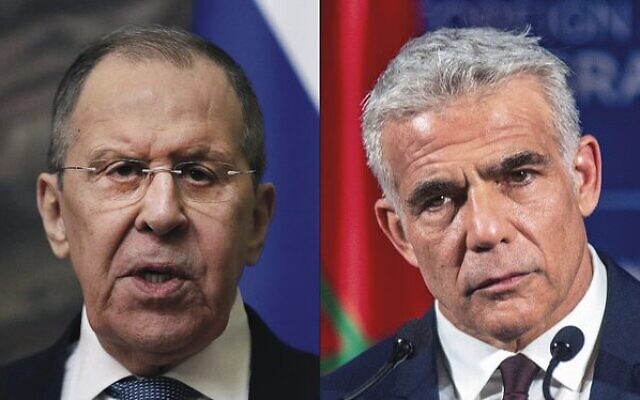 Russia’s Foreign Ministry said on Tuesday that Israel supports the “neo-Nazi regime” in Ukraine, as tensions between Moscow and Jerusalem ratcheted up following Russian Foreign Minister Sergey Lavrov’s incendiary remarks on the Holocaust earlier this week.

In a statement on Tuesday, Russia accused Israeli Foreign Minister Yair Lapid of making “anti-historical statements” that “largely explain why the current Israeli government supports the neo-Nazi regime in Kyiv”.

The statement cited “examples of cooperation between Jews and the Nazis” during the Holocaust, noting the Judenrat councils formed in many Jewish communities and those who ran them, “some of whom are remembered for absolutely monstrous deeds”.

The Russian Foreign Ministry claimed that while during the Holocaust “some Jews were forced to participate in crimes,” Ukrainian President Volodymyr Zelensky, who is Jewish, “does this quite consciously and quite voluntarily.” The statement also claimed that Ukraine is currently home to “the most extreme antisemitism”.

Moscow accused Zelensky of “hiding behind his origins” while he consorts with neo-Nazis and the “spiritual and blood heirs of the executioners of his people.”

Israel – along with many Western nations – harshly criticised Lavrov for comments made on Sunday claiming that “Hitler also had Jewish blood” and that “some of the worst antisemites are Jews.”

Lavrov made the remarks in an interview with an Italian news outlet while attempting to justify the oft-repeated Russian talking point that it invaded Ukraine in an effort to “de-Nazify” a country led by a Jewish president.

In remarks on Tuesday, Zelensky reacted to Lavrov’s statements, saying, “These words mean that Russia’s top diplomat is blaming the Jewish people for Nazi crimes. No words.”

Russian Ambassador to Israel Anatoly Viktorov was summoned to the Foreign Ministry on Monday for a discussion on the comments, which Lapid called “unforgivable.”

Lapid said on Tuesday morning that the Russian government should apologise to Jews and to Holocaust victims for Lavrov’s comments. But Moscow’s statement on Tuesday showed Russia is instead more likely to escalate the rhetoric between the nations as ties have grown increasingly strained in recent weeks.

Early on in Russia’s invasion of Ukraine, Israel sought to walk a diplomatic tightrope between Moscow and Kyiv, preserving relations with both of its allies and offering to broker talks. But more recently, Jerusalem has turned towards supporting Ukraine, denouncing Russia for committing apparent war crimes and sending helmets and flak jackets to Ukraine, reversing an earlier policy of not supplying military aid.

In an interview with Kan public radio on Tuesday morning, Lapid said Russia’s envoy had been subjected to a “tough conversation” after being summoned to the Israeli Foreign Ministry on Monday, “since it is unforgivable, unforgivable to blame Jews for their own Holocaust”.

“Hitler was not Jewish and Jews did not murder my grandfather in Mauthausen,” Lapid said.

“The Nazis did it, and all of these comparisons to the Nazis are unforgivable and infuriating.”

Lapid added that Russia “needs to apologise to the Jews, to the memory of those who were killed.” He suggested that Lavrov “read a history book” instead of spreading false “antisemitic rumours.”

The foreign minister said he could not “rule out” the possibility that Lavrov’s comments were made in response to Lapid’s own statements accusing Russia of war crimes amid its ongoing invasion of Ukraine.

According to a Haaretz report on Tuesday, Israel is looking at expanding its military assistance to Ukraine.

After weeks of declining to supply Ukraine with military aid, Israel has amended its policy recently, first agreeing to send helmets and flak jackets to Ukraine, and last week sending an official Defence Ministry representative to US-led talks in Germany on equipping Ukraine.

According to a diplomatic official cited in Haaretz, Israel will not consider sending offensive arms or advanced defensive technology, such as the Iron Dome anti-missile system, but will attempt to find equipment that can be donated without sparking a crisis with Moscow.