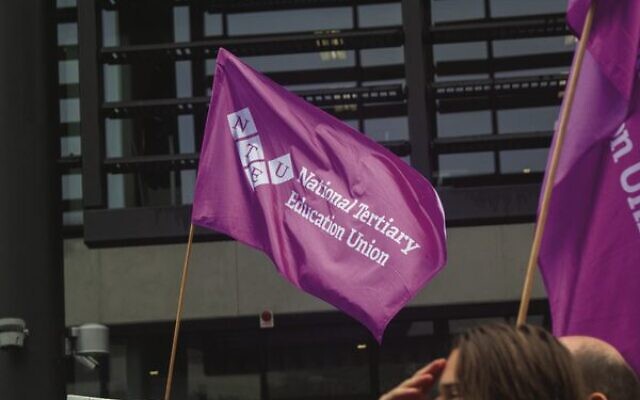 The NTEU has a passed a motion in solidarity with Palestine. Photo: Supplied.

THE National Tertiary Education Union (NTEU) has voted to support a motion in solidarity with Palestine and oppose the adoption of the IHRA Working Definition of Antisemitism at Australian universities – a resolution Executive Council of Australian Jewry (ECAJ) co-CEO Peter Wertheim has called a “disgrace”.

The motion, debated last week at the NTEU national council, was put up by Fahad Ali, a boycott, divestment and sanctions (BDS) advocate and the co-organiser of the Sydney Festival boycott.

The motion was amended to remove a paragraph stating that the NTEU – which is not affiliated with the Labor Party – officially endorses the BDS movement.

The NTEU said it “stands in solidarity with the people of Palestine in their ongoing struggle against ethnic cleansing and apartheid” and that as “people of conscience, we must bring our power to bear on the structures that enable this oppression”.

Included in the motion is a pledge to strengthen ties with Palestinian unions, prohibit elected officials or staff of the NTEU from accepting expenses-paid tours to Israel that are sponsored by the Israeli state or “pro-Israel lobby organisations”, and encourage members to engage in BDS actions.

While the motion stated it “opposes antisemitism and all prejudice in the strongest terms”, it also believes the adoption of the IHRA Working Definition of Antisemitism would “chill free speech, restrict academic freedom, and restrict peaceful political expression”.

Wertheim told The AJN he feels “sorry and concerned for the NTEU’s Jewish members who are committed to what the union is supposed to stand for, but now face a real moral dilemma”.

“The NTEU resolution is a disgrace,” he said.

“Yet, without any consultation with us, the NTEU national council seems to think that it knows better than the Jewish community what does and does not constitute antisemitism. We doubt that the NTEU would have treated any other group that has been the long-standing target of intractable prejudice and hatred with such outrageous condescension.

“The resolution’s reference to ‘pro-Israel lobby organisations’ is a sneering dismissal of every major Jewish community organisation in the country, simply for supporting Israel’s right to exist in peace and security.

“Last year as federal ALP leader, Anthony Albanese said that he regards the BDS campaign ‘as one that is based upon a racial targeting of a group, in this case Israel’. Yet the NTEU national council has now formally spoken of BDS in positive terms.”

“We have already seen how the issues faced by Jewish students and faculty are often ignored and misrepresented,” she said.

“This resolution will only worsen the climate of hostility towards Jewish students and faculty on Australian campuses.”

“The NTEU has packed lies, half-truths and obfuscations into a motion that is specifically designed to reduce understanding of the Israeli-Palestinian conflict and to increase the exclusion and danger that Jewish Australians are facing on campus,” ZFA President Jeremy Leibler said.

“While spurious and easily disproven allegations about Israel are offensive and highlight the wilful ignorance of NTEU members, the real harm in this motion is the denial of Jewish indigeneity – indeed, Jewish connection – to the land of Israel. Far from being a colonialist endeavour, Israel is the self-determination of its indigenous inhabitants. Describing Israel as practising colonialism, apartheid and genocide is a deliberate tactic designed to seek the ostracism of anyone who supports Israel’s existence. It is a deliberate tactic designed to exclude almost every Jew in Australia.”

Leibler rejected the motion’s paragraphs on antisemitism. “That the NTEU has the temerity to define and tell the Jewish community what is and isn’t antisemitism is deeply insulting,” he said. ” The definition the community overwhelmingly endorses is the one also endorsed by the UN, by the EU and by Australian federal and state governments – the IHRA working definition of antisemitism.”

Professor and academic Philip Mendes told The AJN the BDS movement is “toxic and poisonous” and that it “incites active discrimination against Israeli Jews on national and ethnic grounds”.

“That discrimination is against Australian multicultural values,” he said.

“It creates divides between people from different cultural and religious backgrounds within the union movement, within academia and within Australian society generally.”

An NTEU official told The AJN the motion was not the position of the union’s leadership and would not affect its “core policy” of supporting a two-state solution.