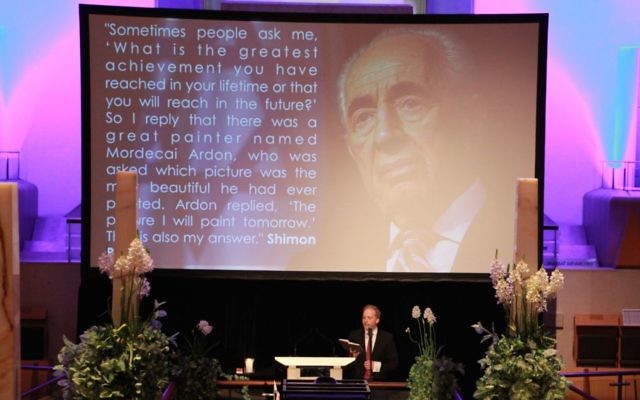 Prayers, inspiring words and beautiful singing, by Josh Weinberger and Rabbi Yehuda Niasoff, were fitting elements of the commemoration service in Sydney on October 26.

Special guest Anat Sultan-Dadon, the Deputy Chief of Mission at the Israeli Embassy, said of Peres, “Whatever existed, he believed it could be changed for the better” when she spoke at the event, which was organised by communal organisations and held at Central Synagogue.

“From the ashes of the Shoah, he helped build a rising nation in our ancient homeland.”

Noting that Peres led the creation of Israel’s defence industry and negotiated key arms deals with foreign countries, Sultan-Dadon said his other dream was to reach peace and coexistence with Israel’s neighbours.

“Unfortunately, he did not live to see a full realisation of his dream, but he continued to tirelessly pursue it and share it with the people of Israel, and it is one we continue to strive for.”

Executive Council of Australian Jewry president Robert Goot described Peres as “an inspirational leader who has been part of our lives for all of our lives”.

“As a politician, he wasn’t particularly popular within the Israeli public,” Goot said.

“But as Peres himself said, ‘It’s better to be controversial for the right reasons than it is to be popular for the wrong reasons.’

“As president, Peres had his most widespread appeal and influence, becoming one of Israel’s most loved and illustrious representatives on the world stage.

“He dared to dream. He will be sorely missed.”

Zionist Council of NSW president Richard Balkin said Peres “raised the status of the State of Israel immeasurably among the nations of the world”.

“His optimism and belief in the future and the younger generations was supreme,” Balkin said.

NSW Jewish Board of Deputies president Jeremy Spinak said Peres’ legacy “lives on in all Jewish communities, and his reach extends all over the world”.

He added, “Greatness has no borders and it does not perish. May his memory be a blessing to all of us.”

In Melbourne, cellist Lexi Kowal’s sombre notes, Kaddish by Rabbi Ralph Genende, candle-lighting by Saul Burston of the Australasian Union of Jewish Students – to cantor Michel Laloum’s Kel Moleh Rachamim – and a finale by the Leibler Yavneh College Hebrew Music Ensemble, made for a heartfelt community tribute to Peres.

“Shimon Peres’ deep personal commitment to our nation began when the State of Israel was but a dream for the Jewish world,” the envoy said, describing 11-year-old Peres’ aliyah from Poland in 1934, the tragic fate of family members in Poland during the Shoah, and his milestone achievements as the state was born and developed.

Ben-Shmuel recounted Peres’ early life on a kibbutz, his Haganah service, and his rise through Israel’s Defence Ministry, securing unlikely arms deals that gave the young state critical military deterrents against its enemies. “He was the prime mover of Israel’s nuclear capability against all odds.”

Beyond Israel’s defence, “his other dream was to reach peace and coexistence”.

After the historic breakthrough with Egypt, Peres “worked tirelessly throughout the years to secure peace with our major adversaries, and especially our staunch ideological and historical enemy, the Palestinians … These efforts resulted, as we all know, in some success and some failures, due to the complexities of the Arab-Israel conflict.

“Shimon Peres’ story is the story of our people, from the ashes of the Shoah, the Holocaust, he helped build a thriving nation in our ancient home.” Peres “became one of the most successful, -well-known and respected leaders in the whole world”, as shown by the massive turnout of dignitaries at his funeral, Ben Shmuel reflected.

In readings honouring Peres, the Jewish Community Council of Victoria’s Atida Lipshatz noted he had orchestrated Israel’s first humanitarian aid mission, to an earthquake in Greece in 1953.

The Australia/Israel & Jewish Affairs Council’s Joel Burnie recalled a quotation of Peres, who was Israel’s ninth president, that “it is better to be controversial for the right reasons than to be popular for the wrong reasons.”

Alan Stein of the Zionist Youth Council of Victoria lauded the Peres Centre for Peace’s Australian Rules football and cricket teams in which young Israelis and Palestinians played.

He described Peres as a youthfully minded president, who at 88 created a Facebook account, and in retirement, weeks before his death, installed Snapchat on his smartphone to keep in touch with younger Israelis.

Hallely Kimchi of the Zionist Federation of Australia said Peres, when asked the secret of his resilience, had quipped: “I’m made of the future.”