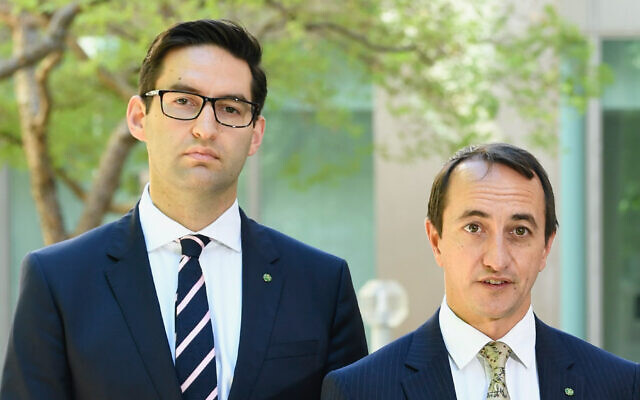 FEDERAL MPs Dave Sharma and Josh Burns will represent Australia on a newly established Inter-Parliamentary Task Force on combating online antisemitism together with bipartisan representatives from Israel, the UK, USA and Canada.

“Over the last several years, there has been an alarming increase in antisemitic incidents across the globe, with many originating online,” a joint statement released last week said.

The aim of the task force is to establish “consistent messaging and policy from Parliaments and legislatures around the world in order to hold social media platforms, including Twitter, TikTok, Facebook and Google, accountable”, as well as the “adoption and publication of transparent policies related to hate speech”.

It also seeks to raise awareness about antisemitism on social media platforms and its consequences “in order to acknowledge the tremendous responsibility that comes with the power the platforms hold”, and to emphasise that “if one minority cannot be protected by hate speech policies, then none can be”.

“This task force will therefore serve as a means for protecting all minority groups from online hate,” the statement read, adding, “The fight against antisemitism is a non-partisan consensus in democratic countries.”

Sharma, the Liberal Member for Wentworth and former ambassador to Israel, said recent years had seen a “disturbing trend” of growing antisemitism worldwide.

“This has been especially pronounced on social media platforms,” he said.

“This task force will allow us to share experiences and best practice for combating this disturbing trend. We will join our efforts to ensure that intolerance which has no place in our societies does not find a foothold in the digital world.”

Warning that “the rise of extremism and antisemitism is happening across the world”, Burns, the Labor Member for Macnamara, lamented, “All throughout history, in times of societal upheaval and economic stress, there have always been those who have sought to blame minorities for the supposed ills of their societies – and the Jewish people have often been the target.

“This task force is an important step to coalesce allies to combat the bigotry that is occurring in the dark corners of society, especially online.”

The launch of the task force follows campaigns working to expose online antisemitism, including the #NoSafeSpaceForJewHate campaign that served as a global call to action to combat the “virulent antisemitism that goes unaddressed or inadequately addressed on social media platforms”.

That campaign was sparked by Twitter’s failure to crack down on British rapper Wiley’s antisemitic tirade in July this year.

Executive Council of Australian Jewry president Jillian Segal told The AJN, “This is an extremely important initiative that recognises that antisemitism is relentless, complex and needs to be confronted through international cooperation.

“Having MPs Sharma and Burns representing Australia on the task force not only brings excellence and insight, it reflects the bipartisan resolve of the Australian Parliament to combat the evil of antisemitism.”

She added, “We wish them both well in their vital endeavours and offer our full support and assistance to them and their colleagues.”