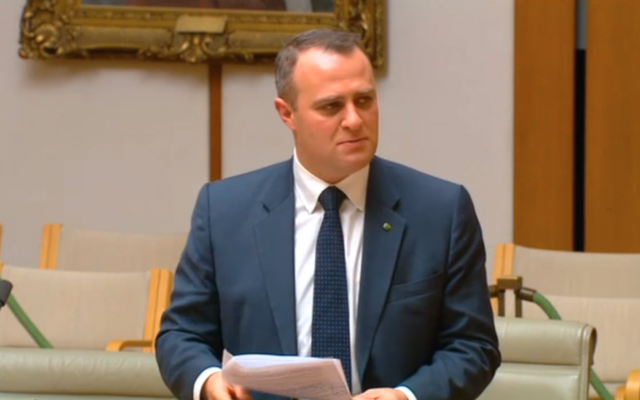 THE Coalition and ALP duelled in Federal Parliament this week in an effort to show which party can express greater support for Israel.

Liberal MP for Goldstein Tim Wilson put forward a motion on Monday night expressing Australia’s solidarity with Israel and lambasting the ALP for “a concerning collapse of the traditional support among Australia’s political parties” for a negotiated peace agreement.

Lamenting what he saw as the decline of bipartisanship on Israel, Wilson remarked in the Federation Chamber: “I wish this motion never needed to be moved.”

The motion stated: “Australia remains committed to Israel’s right to exist in peace and security, and continues to support a peaceful two-state resolution for the Israeli–Palestinian issue” and referred to Australia and Israel having “a unique relationship supported by a commitment to the rights and liberty of their citizenry, the rule of law and a pluralist society underpinned by mutual respect”.

“The culture within the Australian Labor Party regarding foreign policy is deteriorating, aided by high-profile party figures who perpetrate enduring myths about the causes of instability in the Middle East,” Wilson’s motion stated.

The MP called on Labor to “reject the empty symbolism within the politically correct interpretation of issues in the Middle East [and] condemn senior figures within it who have called for Australia, independent of any agreement between Israel and the Palestinians, to formally recognise a Palestinian state”.

Responding, Isaacs Labor MP and shadow attorney-general Mark Dreyfus blasted the motion, stating “both major parties recognise that Australia’s interests, as well as the interests of Israelis and Palestinians, are best served by rock-solid, bipartisan support for both peoples”.

“This motion, by an irresponsible backbencher, is an unfortunate exception to this bipartisanship. The tragic conflict between Israelis and Palestinians and the fraught peace process in which they have been involved for generations are not playthings for Australian politicians desperately seeking to score some cheap political points,” he added.

Dreyfus noted that of the 15 Jewish MPs since World War II, 12 have been Labor, and attributed this in part “to a number of historical factors, including Labor’s enthusiastic support for the creation of the State of Israel in 1948, while the Liberal Party under Robert Menzies opposed that historic event”.

Liberal MPs Andrew Hastie, Craig Kelly and Andrew Wallace, and Labor MPs Chris Hayes, Mike Kelly and Gai Brodtmann also debated the motion, which was adjourned to the next sitting.