To say my Jewish education was poor would be an understatement.

With a Jewish mother and Jewish grandparents who are extremely proud of their heritage, our community and our traditions, it would be fair to assume that I was born into a richly Jewish life, with Pesach celebrations and Chanukah with the family. However, I grew up in Dubai, and this was not the case.

Without any informal or formal Jewish education, I was well behind on general knowledge of the Jewish people, Jewish traditions and Israel – not even knowing what the Holocaust was until I was a teenager.

I think I knew in some abstract sense about Judaism and that I somehow fell under that title; however, it was just a word, holding no weight or meaning. I was in no way connected to my Jewishness or the Jewish community.

“The kids would buy textbooks and atlases and all kinds of stuff, and we used to have to go through with a black marker pen and cross Israel off the map, rub the Israeli flag out.”

I didn’t know any other Jewish people in the whole city, all of us afraid of the consequences and repercussions of outwardly celebrating who we were. As the years ticked over in Dubai I think I lost more and more of that part of me. In saying that, my childhood was rich and full in many other ways, making a myriad of friends from all over the world, experiencing different cultures and helping me to be a better and more open-minded person, and having the opportunity to travel all over the world from Dubai’s very central and accessible location.

The main thing about my upbringing that surprises people is that I didn’t know about the Holocaust until my teen years. As a Jewish person this is shocking. When the Second World War was taught in British curriculum schools like mine, there was absolutely no mention of the Shoah and the atrocities that befell the Jewish people, or the other minority groups that were persecuted.

Speaking to a teacher of mine from Dubai, Mr Hoskisson, I wanted to understand why this was.

He told me, “The Holocaust did not feature in anything in the curriculum with regard to the Second World War.

“We just basically talked about the conflict between the Nazis and Britain. And the main thread of the curriculum was supposed to be what life was like for a child during World War II in Britain.” 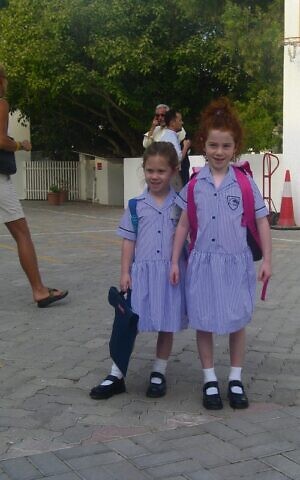 With my sister for our first day of school in Dubai.

I went to a school called Horizon School and I remember learning about Nazis, but never Jews. We would make our own bunkers out of papier-mache, and write imaginary diary entries as if we were a British child during the war, believing that was the worst it could get.

When I was about nine years old I went on a family holiday to Germany and Austria. We travelled through Munich and Salzburg, eating pretzels and schnitzel. During the trip my parents brought my sister and I to the Dachau Concentration camp. The sombre feeling of those touring the camp was not something I understood, as I skipped along quite happily. My own parents were confused by how nonchalant I could be about it, regardless of my young age. But looking back I understand that I had not learnt about it, and was not taught the goings-on in places such as Dachau and I definitely didn’t understand my own connection to it. With my own parents new to Dubai, they too didn’t know how little we were being taught about the Jewish people, the Holocaust and even Israel.

I also never understood my connection to Israel, in fact I didn’t know it existed. My primary school teacher confirmed that I wasn’t just messing about in class and missed the lesson on Israel, explaining, “The kids would buy textbooks and atlases and all kinds of stuff, and we used to have to go through with a black marker pen and cross Israel off the map, rub the Israeli flag out. So that there was absolutely zero mentioned or chance of the children seeing anything to do with Israel in the books that they were using.”

The Torah was banned and never mentioned, Israel was non-existent to me. My father works for an airline that operates out of Dubai, and no flights would ever go in or out of Israel.

When he worked at an Emirati school which was heavily populated by Palestinian teaching staff, he recalled a time when “one of the Islamic teachers had offered to the children to stay behind after school and paint Israeli flags on a Wednesday, which was the beginning of the weekend, and then they said when the school is closed, we can stay behind and burn the Israeli flags in the playground”.

I didn’t go to an Islamic school but rather an international school at which there was a mixing pot of different nationalities. I had best friends from Ireland, Kenya, New Zealand, and Malaysia, but none of us had heard of an Israeli person.

Mr Hoskisson said, “Even at Horizon when I was working there, it was a case of you know, if we were putting displays up, don’t put any stars up there that are six-pointed. It wasn’t directly from management, but it was a case of if you put six-pointed stars on the wall and somebody from the Ministry of Education or the Knowledge and Human Development Authority (KHDA) came around the school and saw them, it would be a problem.” 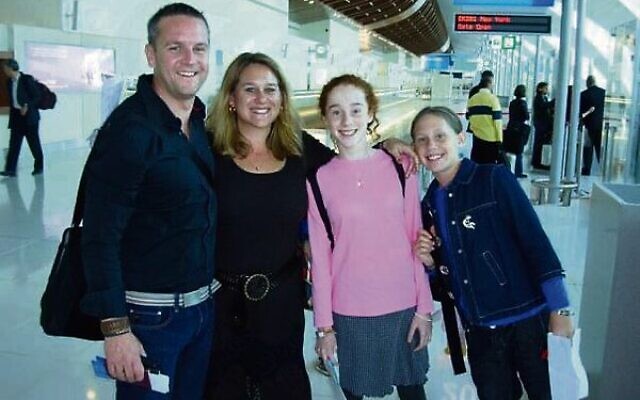 From left: Mr Hoskisson, my mum, my sister and me.

When I moved back to Australia, my grandparents thought it would be a good idea to bring all of us to Israel, my mother included. So we headed to Tel Aviv and then to Jerusalem to meet all the distant relatives we didn’t even know we had.

It was an incredible trip and also a wake-up call. I remember thinking, “How much I know about Judaism, or whether or not I practise – does not matter, I am Jewish, in my eyes and in those of everyone around me.”

Funnily enough, that sentiment was echoed more recently when I started working at The AJN, by a rabbi I was meeting with. He said, “You and I are as Jewish as each other.”

But travelling to Israel through the UAE was not an easy feat. We chose to fly out of Dubai because we get free flights with my dad’s airline, otherwise it would not have been the recommended route in 2014.

We had to take a flight to Amman, Jordan, stay a night and then get on the quick one-hour flight to Tel Aviv. It was important that when we landed in Israel they didn’t stamp our passports because it would have raised alarms for immigration when returning to Dubai. 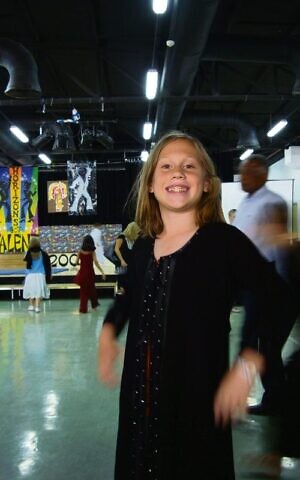 Regardless of the efforts we made to go undetected, we were heavily questioned when leaving Israel, about why we were going to the UAE and what we had been doing in Israel. This was before the Abraham Accords and relations were not what they are now.

Mr Hoskisson, who has lived in Dubai for over 20 years, said “When I first arrived in Dubai, it was 2001, so it was 21 years ago … Israeli people weren’t allowed to be in Dubai, there was no travel between the two places.”

He shared an anecdote: “I remember, in 2003 when I first started working at Horizon school, the International Monetary Fund had a conference in Dubai, and there was a big deal made about the fact that I think there were three or four delegates from Israel who were allowed to enter the country. And it was a very, very, very big thing.”

He added, “But because of that, we had been warned by the necessary authorities that we had to be prepared for possible terrorist action on the school site. We were advised in the school to park a bus across the school front gate, so there could be no ram raiding of the school by any kind of terrorist organisation that would be anti-Jewish because of these delegates being allowed to enter the UAE from Israel.”

Since the Abraham Accords, there has been a major shift in attitudes in the UAE towards both Israel and the Jewish people, and it strangely happened almost overnight.

Mr Hoskisson explained, “The shift happened very, very fast. The peace agreement was signed, and all of a sudden, there was peace between Israel and the UAE and we were allowed to mention them. Before you weren’t allowed to mention Israel or talk about Israel at all. 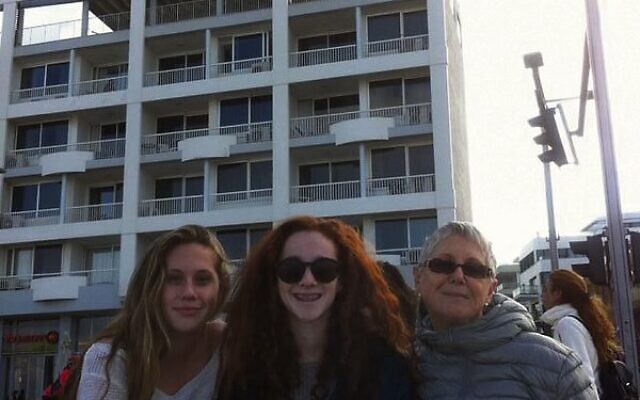 Me (left) with my sister and grandmother in Tel Aviv.

I went to Dubai in January of this year and was incredibly surprised by what I saw. When attending the Dubai Expo, Israel had its own pavilion, at which graphics were displayed of the Israeli flag together with that of the United Arab Emirates. On that same day at the expo I saw men in yarmulkes casually strolling around, something I never imagined I would see in the place I consider my second home.

Emirates are now advertising on their website that they are starting flights to Tel Aviv in June, and a smaller airline, Fly Dubai, has been flying there already.

“I think it’s really exciting that there is a relationship between the two countries, I think that had to happen,” Mr Hoskisson said.

Applying for this job at The AJN has, however, given me the opportunity to find my place in this community. It has acted as an immersive and intensive course in Judaism, Jewish culture and the vibrant Melbourne Jewish community.

I applied for this job in the hopes of getting what I felt I never did, a Jewish education and a place in the Jewish community.

I never expected to be received the way I have been, with many rabbis living up to their title of teacher. I have been taken under the wing of CEOs, presidents of organisations and of course my colleagues at The AJN.

There is still much for me to learn as a young Jewish woman, but with the help of my new friends in the Melbourne Jewish community I am well on my way.