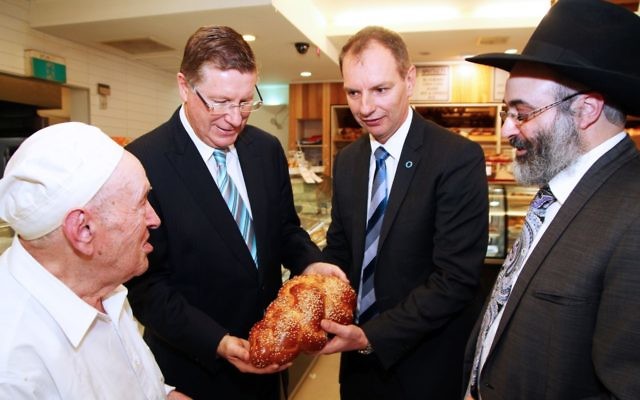 VICTORIAN Premier Denis Napthine came out strongly in support for Israel and Victorian Jewry when he strolled down Carlisle Street and attended a prayer gathering at Mizrachi shul last week.

Organised by member for Caulfield David Southwick, Napthine was joined by Liberal MPs Clem Newton-Brown, Elizabeth Miller and Georgie Crozier as he walked down Carlisle Street speaking to business owners including Mendel Glick of Glick’s bakeries, who explained to the Premier he hadn’t had a day off since 1955.

The delegation then moved on to Mizrachi where a prayer for IDF soldiers and the State of Israel was recited, before addresses from the Premier, Southwick and president of the Organisation of Rabbis of Australasia Rabbi Meir Shlomo Kluwgant.

In an exclusive interview with The AJN after the event, Napthine condemned the recent spate of anti-Semitic incidents including one where a Jewish man was assaulted in Elsternwick last month in the wake of escalating tensions in Israel.

“There is no place in Victoria for any abuse or any violence against any member of any community or any faith group,” Napthine said, calling for Victorians to be “tolerant and considerate”.

“The Coalition government firmly and strongly believes in the right of Israel to exist and part of that is our belief that Israel has every right to protect its borders and protect its citizens. We urge, within that context, for all sides to work towards peace.”

Napthine said the lines between being critical of Israel and being anti-Semitic were being blurred.

“I think there are issues when you have faith groups that also have a racial component and I think that is most unfortunate.”

Rabbis representing a broad cross-section of Victorian Jewry, as well as communal leaders such as Jewish Community Council of Victoria president Nina Bassat and the Zionist Federation of Australia’s Danny Lamm were in attendance at Mizrachi, where Southwick thanked his parliamentary colleagues for their support.

“We have three members of Parliament here that went on record … and declared their support for Israel and Israel’s right to exist.”