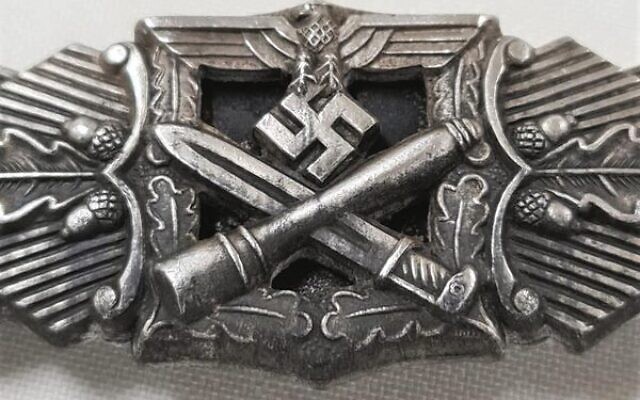 THE Anti-Defamation Commission (ADC) has condemned the latest auctions of Nazi memorabilia, after a West Australian vendor announced a range of items to go under the hammer this month.

In its online catalogue, over 90 of almost 1000 items relate to the Nazis, including a 1932 Coburg badge (the first badge recognised as a national award by the Nazi party), a close combat clasp, a Luftwaffe badge, and a Luftwaffe service medal, all with images of swastikas. Several more items with swastikas are for sale.

However, the auction house noted online that its memorabilia “are sold as historical pieces only”.

Contacted by The AJN, Jamey Blewitt, owner and auctioneer of JB Military Antiques, reiterated his previous comments about Nazi memorabilia. The former high school teacher who taught about the evils of Nazism and has visited Auschwitz four times, would say only that his views have not changed.

In 2016, after ADC chair Dvir Abramovich called for the sale of Nazi memorabilia to be regulated, Blewitt stated, “We do not condone racial intolerance, nor do we glorify it with the sale of Third Reich items … we display items with a clear warning of our intents and non-allegiance in any fashion to the idiots in the community that promote ludicrous ideas of Holocaust denial and Jew-haters, to put it simply.”

Blewitt told The AJN, “We are including some Israeli Defence Forces used items in our upcoming auction, which we have included to show us to be non-political and open to including all items of world militaria in our auctions.”

Last year Blewitt came under fire from the ADC for a Facebook post in which he juxtaposed Abramovich’s photo, used in a related story in The Australian, with one of Adolf Hitler. In another post, Blewitt had described the ADC’s opinions as “one-sided”.

Slamming the auctioning of Nazi memorabilia, Abramovich said this week, “I can’t imagine the pain Holocaust survivors and their families would be feeling right now.”

He urged JB Military Antiques to stop “trafficking in these instruments of death”, adding, “I call on Premier Mark McGowan to honour the sacrifices that our brave Diggers made and to follow Victoria’s lead by banning the public display of Third Reich symbols.”