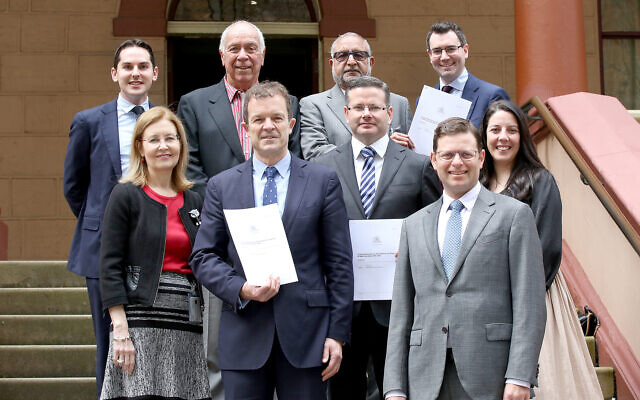 NSW Jewish Board of Deputies (JBD) CEO Darren Bark called it “a historic day for New South Wales” as the state’s legislation banning Nazi symbols was passed on Thursday.

The new law makes it a criminal offence to knowingly display a Nazi symbol in public without a reasonable excuse.

Attorney General Mark Speakman said it was “a significant moment” for Holocaust survivors and their loved ones.

“The events that occurred under the Nazi regime represent one of the darkest periods of recorded human history,” he said.

“This new offence sends a clear message that the display of Nazi symbols, and the hatred and bigotry they represent will not, and should not, be tolerated.”

He said the Bill contains broad exceptions to allow Nazi symbols to be displayed where it is in the public interest in good faith, including for an academic, artistic or educational purpose.

Minister for Multiculturalism Mark Coure said, “This bill will also protect those that use a swastika for religious and spiritual reasons including Buddhists, Hindus and Jains. It clearly states that the displaying of a swastika in connection with these spiritualties will not be deemed a Nazi symbol.”

Member for Vaucluse Gabrielle Upton called the passing of the Bill “an important win for the strong Jewish community in my electorate”.

Bark said it was “a significant blow to those who promote hate and vilification in our community”.

“The legislation is also a game-changer in tackling online hate. It is time our tech companies step up and ensure these illegal symbols are removed from their platforms, and the offenders banned and prosecuted,” he said.

“We acknowledge and thank the NSW Government, the Opposition, the Hindu community and all MPs who joined together in taking a stand against hate, wherever it appears.”

Hindu Council of Australia national vice-president Surinder Jain said, “For the Hindu community, today is extra special. This legislation will not only protect our community from those who wish to cause harm, it frees our sacred swastika from its indoor prison.

“We were so pleased to work with the Jewish community to make this a reality.”