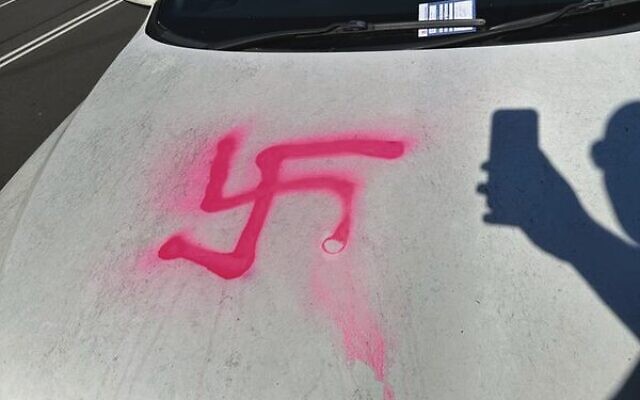 Police were called to Victoria Street in Waverley in the early hours of Sunday morning after receiving reports that a number of youths were vandalising parked cars and other property by spraying Nazi swastikas on them.

The police found graffiti on three vehicles, on two homes, a bus stop and a footpath, and spoke to three youths, including a 13-year-old boy and 14-year-old boy.

“Three youths were spoken to by police at a nearby bus stop; it’s alleged the trio had cannabis and a water pipe in their possession,” said the NSW Police in a statement.

“The boys were taken to Waverley Police Station, where a 13-year-old boy and a 14-year-old boy were issued cannabis cautions.”

CEO of the NSW Jewish Board of Deputies Darren Bark encouraged the community to continue to report all acts of vandalism.

“The NSW Jewish Board of Deputies condemns the alleged daubing of cars and buildings with Nazi symbols in Waverley by two youths,” Bark said.

“This incident is yet another example of the vital need for better education in our schools on the Holocaust and the pure evil which Nazi symbols represent. Anyone caught displaying a Nazi symbol in NSW without a reasonable excuse can now face a maximum of 12 months in jail, an $11,000 fine, or both.

“We remind the community to remain vigilant and report any such vandalism to the police and CSG immediately.”