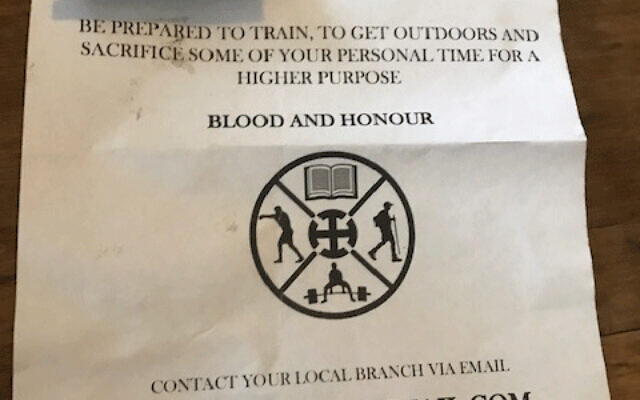 Flyers promoting a neo-Nazi group have been distributed around Bondi. Photo: Supplied.

DISTURBING flyers promoting a neo-Nazi group have been found in letterboxes around Bondi.

A woman who reported the flyers to the NSW Jewish Board of Deputies said her husband had taken the material to Bondi Beach Police Station.

“This is of course a very Jewish neighbourhood with synagogues nearby,” she said, noting their placement in Bondi letterboxes was “intended as intimidation”.

“This white supremacist movement clearly needs to be monitored.”

In the nearby suburb of Rose Bay, parents were confronted with a Nazi swastika found drawn on a wall outside a Jewish-run daycare.

JBD CEO Darren Bark said: “We remind the community to remain vigilant against all forms of antisemitism and hate, and to report incidents such as these to police and the Community Security Group immediately.”

Meanwhile, JBD has “cautiously” welcomed the swift action taken by Football Australia following disturbing crowd behaviour at the recent Australia Cup final in Sydney. So far two fans have been banned from attending all Football Australia-sanctioned matches for life after they were shown to be performing Nazi salutes.

A large contingent of United 58 fans were filmed displaying the salute and other related symbols during the match against Macarthur FC earlier this month. The Welcome to Country and national anthem were also booed.

“We cautiously welcome the action taken by Football Australia in handing lifetime attendance bans to fans who performed a fascist salute,” Bark said.

“Images on social media show many more fans taking part in these abhorrent acts, including booing the Welcome to Country. We look forward to further swift and heavy penalties to be enforced by Football Australia as these fans are identified.