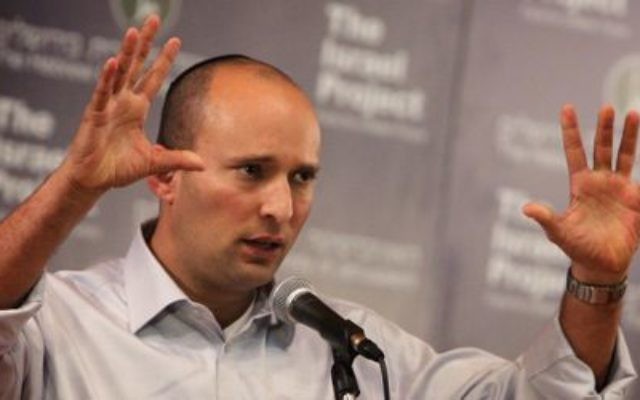 Education Minister Naftali Bennett has withdrawn his demand to be Defence Minister.

THE Gaza violence pushed Israel into the throes of a political crisis, forcing the Prime Minister to pull a rabbit out of a hat in order to avoid early elections.

Naftali Bennett, leader of the Jewish Home party, backed Bibi into a corner. He wanted to become Defence Minister, and said that if he didn’t get his way, he would remove his party from the government, decimating its Knesset majority.

Bennett was playing double-or-quits. He is already Education Minister, but wanted the more prestigious defence portfolio. He said that Israel acted too weakly against Hamas, and needs a right-winger like him running defence.

But by Monday lunchtime, the plan had blown up in Bennett’s face. Netanyahu outmanoeuvred him.

Just days after he played hardball with Bibi, Bennett was left looking sheepish, with no choice but to back down. “I know I may pay a political price,” he acknowledged, adding: “You win some, you lose some.”

Netanyahu, instead of having an election forced on him, was left buoyant.

“Bibi is stronger,” said Hebrew University political scientist Abraham Diskin, talking to The AJN. “He proved who the boss is.”

What is more, Netanyahu got to flaunt his strengths and impress the public, shifting the conversation away from his unpopular Gaza ceasefire. “He definitely proved his ability, experience and courage,” noted Diskin.

When Bennett laid down the Defence Ministry demand, it had seemed like a perfect opportunity for this politician who has been on an almost-unstoppable rise since he joined the Knesset just five years ago.

Defence Minister Avigdor Lieberman had just resigned, so the post was available. If Netanyahu refused to give him the job, Bennett expected to gain seats in an election.

But Netanyahu scuppered his plan by turning Bennett’s own supporters against him with a single word: Oslo.

He spoke about 1992, when right-wing parties left the Likud-led government triggering elections. The left came to power and signed the Oslo Accords.

Netanyahu asked today’s right-wingers if they wanted history to “repeat the historic mistake” which he said led to the “Oslo disaster”.

Right-wing rabbis and activists started leaning on Bennett to stay in the government. “In the end he wasn’t supported by his own constituents,” said Diskin.

To hammer home the message that Bennett should stay, Netanyahu took to the airwaves with a televised address to the nation.

He suggested that Bennett had just been trying to advance his career, and was getting in the way of his work to keep Israel safe.

“We are in a particularly complex security situation and in moments like these we do not go to elections,” he said, adding: “In the middle of a battle we do not play politics.”

Once Netanyahu had reframed the discussion and cast the Jewish Home leader as harming the right-wing and the nation’s security, Bennett had little choice but to back down.

“We are removing all of our political demands and will help [Netanyahu] in the great mission of making Israel win again,” he said at a press conference.

The saga has not only left Netanyahu stronger to fight for public support, but also with more ministries than ever in his direct control.

Instead of giving the defence portfolio that Lieberman vacated to Bennett, he has kept it for himself, meaning that he is now Prime Minister, Minister of Health, Minister of Foreign Affairs, Minister of Immigration and Minister of Defence.