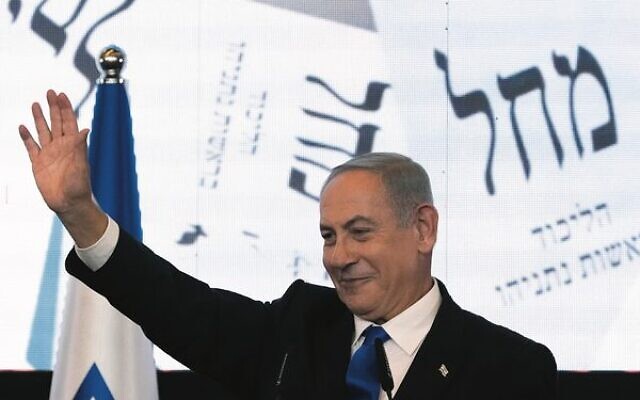 AUSTRALIAN politicians and Jewish leaders have welcomed Benjamin Netanyahu’s return to power for a sixth term, but communal organisations have voiced deep concerns about extremists who might be counted on to form government.

Congratulating the new government, Prime Minister Anthony Albanese tweeted, “We look forward to further strengthening our relationship with the next Israeli government. Australia will always remain a great friend of Israel.” The message was retweeted by Foreign Minister Penny Wong. Adding his congratulations, Opposition Leader Peter Dutton tweeted, “The Coalition is proud to call Israel a close and trusted friend.”

A disciple of racist, anti-Arab Rabbi Meir Kahane and a devotee of Baruch Goldstein, who massacred 29 Palestinians in a mosque, Ben Gvir infamously stoked communal violence over the Oslo Accords only weeks before the assassination of Yitzhak Rabin in 1995, 27 years ago last week. Holding aloft an ornament ripped from the PM’s car, he proclaimed, “Just as we got to this emblem, we can get to Rabin.”

We congratulate Benjamin @netanyahu on the Israeli election result. We look forward to further strengthening our relationship with the next Israeli government. Australia will always remain a great friend of Israel.

Executive Council of Australian Jewry (ECAJ) co-CEOs Peter Wertheim and Alex Ryvchin stated, “These election results point to a decisive victory for the pro-Netanyahu bloc, which we hope will deliver stable government and an end to the cycle of fragile coalitions and snap elections.”

But ECAJ noted that “as has occurred in many democracies around the world, populist extremist politicians with an openly racist and homophobic agenda have made strong electoral gains, and are likely to hold ministerial positions … Though this group runs under the banner of Religious Zionism, in our view, much of their rhetoric is incompatible both with our religion and with Zionism”.

Zionist Federation of Australia president Jeremy Leibler stated, “We are proud of Israel’s thriving democratic system, and wish the incoming government success and wisdom in steering Israel through the many international and domestic challenges it faces.”

But he added that many Australian Jews are concerned about the prospect of Ben Gvir and Smotrich being included in the government, “given their past statements that are inconsistent with the values of every former Israeli government on both sides of politics. We sincerely hope that these views will not form a part of the incoming government’s policies”.

Leibler paid tribute to the outgoing government. “The Bennett-Lapid government should be commended for its many achievements, from carefully maintaining Israel’s security in the face of ongoing terrorism to leading the most diverse government in Israeli history, to further strengthening the Abraham Accords and Israel’s presence in the region.”

Congratulations to Benjamin Netanyahu on his election victory. The Coalition is proud to call Israel a close and trusted friend.

Australia/Israel & Jewish Affairs Council executive director Colin Rubenstein reflected, “Regardless of one’s political opinion, it is to be hoped that, after the last four years of repeatedly deadlocked election outcomes and two shaky and short-lived governments, Israel can now have an extended period of stable government under a coalition with a solid Knesset majority.”

But noting Ben Gvir is “a former disciple of the late Jewish racist extremist Rabbi Meir Kahane”, Rubenstein said, “While Ben Gvir has somewhat softened his anti-democratic and anti-Arab rhetoric in recent months, his rise is nonetheless genuinely worrisome for anyone who cares about the future of Israel’s vibrant democracy, multicultural society and liberal values.” He said Ben Gvir’s “ugly rhetoric and deplorable promotion of discriminatory and harsh measures are not the answer” to resurgent Palestinian terrorism, rocket barrages from Gaza and violence by Israeli Arabs against Jews.

Union for Progressive Judaism co-presidents David Knoll and Brian Samuel, and Australian Reform Zionist Association president Helen Shardey voiced deep concerns about Ben Gvir and Smotrich, describing them as “plainly corrosive forces – and their understanding of what ‘religious’ means is anathema to most observant Jews from any stream of Judaism”.

“We pray that their impact on Jewish pluralism, egalitarianism (with fewer women in the Knesset), and, for example, the LGBTIQ+ community can be kept to a minimum,” they stated.