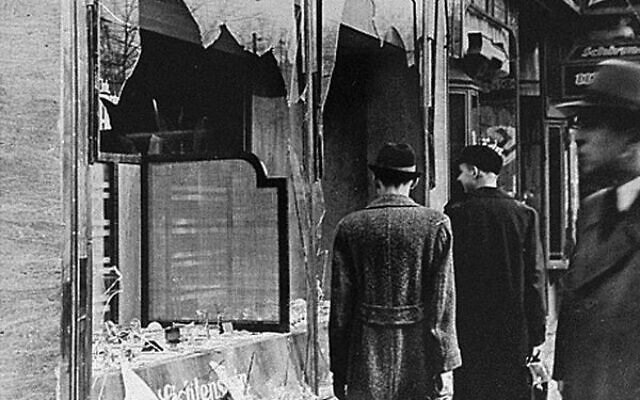 The windows of a Jewish business smashed on Kristallnacht, 1938.

THIS past week marked both the anniversary of Kristallnacht, the Night of Broken Glass which would come to be seen as the harbinger of the Holocaust, and Remembrance Day, on which we pay tribute to the fallen of our wars.

A slender historic thread weaves these two events together. In Melbourne in November 1938, Indigenous activist William Cooper was reading a newspaper about the 20th anniversary of Remembrance Day – or as it was then known, Armistice Day – when he saw reports of Kristallnacht, the Nazi pogrom that had just swept Germany, Austria and the Sudetenland.

It fired his sense of justice, and led to the landmark march by his Australian Aborigines League on the German consulate to condemn the Nazis’ brutality against the Jews.

Far from Australia, on the night of November 9, 1938, and the following day, Jewish homes, schools, shules, hospitals and businesses were ransacked, some 100 people were murdered, many more later succumbing to their injuries. Some 30,000 Jewish men were taken to concentration camps.

Emboldened by the Evian conference of July 1938, where the assembled nations, including Australia, generally showed an unwillingness to take in significant numbers of refugees of Nazi terror, Hitler’s regime chose its moment to strike at its vulnerable Jewish communities.

Eighty-three years on, Jewish communities around Australia marked Kristallnacht on Tuesday night. In Sydney, the communal commemoration paid tribute to the late Eddie Jaku, an eyewitness to Kristallnacht in Germany, who passed away this year aged 101.

Melbourne’s annual Betty and Shmuel Rosenkranz Oration was given by Professor Philippe Sands on the postwar Nuremberg Trials. The late Shmuel Rosenkranz, a communal stalwart, had witnessed the horror of Kristallnacht in Austria.

On Remembrance Day, we honour those who gave their lives for our country, and we recall the disproportionate number from the Jewish community who signed up to serve in two world wars.

It falls one day after the November 9-10 Kristallnacht commemoration. These dates sit side-by-side in a proximity that feels like far more than a coincidence on the calendar.

Lest we forget, Never again.