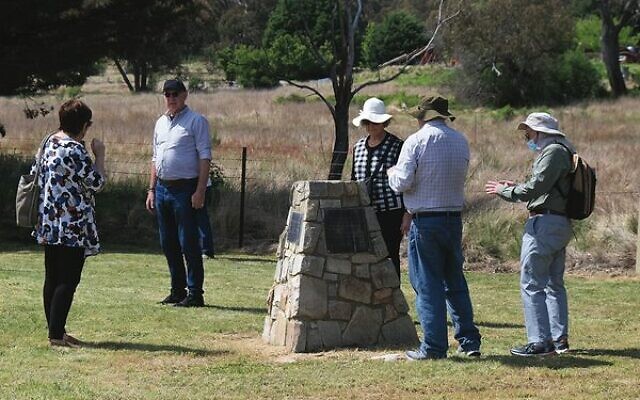 New findings from the heritage-listed Goulburn Jewish Cemetery have come to light, after the cemetery’s trustees enlisted a ground penetrating radar (GPR) survey company to visit the site.

Goulburn’s Jewish Cemetery, one of only two dedicated Jewish cemeteries in NSW, was established in 1848 and is testament to the significant role played by Jews in the development of Goulburn.

Louise and Gerald Speding of survey company Cold Case attended the site to find additional unmarked graves and other physical remains that give insight into the cemetery’s use.

The couple demonstrated the lawnmower-like GPR machine to an appreciative crowd of over 50 people, including locals and members of the Sydney, Canberra and Southern Highlands Jewish Societies.

The findings showed that although Jewish burials are usually aligned with the body directed towards Jerusalem, some remains are aligned north-south, some east-west and others in other directions.

The remains of a caretaker’s cottage can be seen on the site, with one room dedicated to tahara (cleansing rites), a well sunk outside, and a pipe running from the well to the cottage.

The Australian Jewish Historical Society (AJHS) this year identified 30 named persons buried in the cemetery, 11 of those with surviving headstones. Fragments of further headstones are either hidden below the ground or scattered about the site.

The Goulburn Jewish Cemetery, at 116 Long Street, sits on approximately 2000 square metres of land given by Elias Moses and Samuel Benjamin, partners in the Argyle Store in Goulburn, for use as a Jewish cemetery in 1848.

According to Cemetery Trustee Gary Luke, Jewish people settled in Goulburn as early as 1836 and by 1861 it was Australia’s third largest Jewish community, behind Sydney and Melbourne. The community flourished with its members as owners of hotels and retail stores, involved in gold-buying and money-lending and active in communal affairs.

Most Jewish people had left the area during the 1880s, and by 1943 the cemetery was closed and the caretaker’s cottage demolished. The site became heritage listed in 2021 thanks to the efforts of Luke and other trustees.