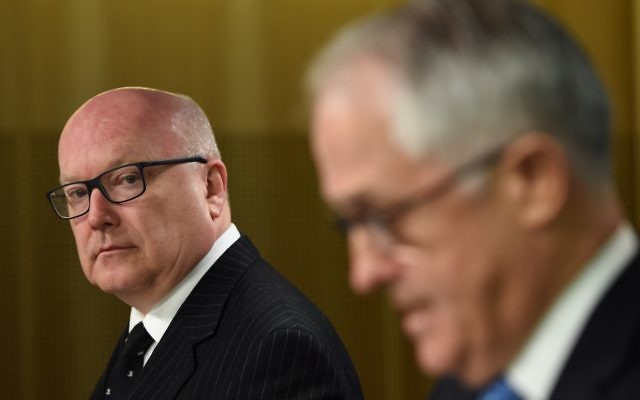 CONFIRMATION from Attorney-General George Brandis that a new federal criminal offence of advocacy of genocide will be “introduced early in the new Parliament” was cautiously welcomed by the Executive Council of Australian Jewry’s (ECAJ) executive director Peter Wertheim.

Wertheim identified several problems with the draft legislation that need addressing, particularly in regard to defences that would be available to those charged.

A spokesperson for Brandis told The AJN the proposed new offence was included in a counter terrorism bill assessed by the Parliamentary Joint Committee on Intelligence and Security late last year, “but wasn’t debated or passed before the Parliament dissolved”.

Calling for fine-tuning and clarification on matters of concern prior to the new Parliament receiving and debating the bill, Wertheim said, “One positive is that the new criminal offence will only require proof of ‘advocacy’ of genocide, rather than the more difficult to prove ‘incitement’.”

Noting a November 2015 government announcement to make the new offence applicable to people located overseas as well as in Australia, Wertheim said, “We trust that continues to be the government’s intention, and look forward to confirmation,” adding, “The penalty needs to be clarified.

“The analogous existing offence of advocating terrorism carries a maximum of five years’ imprisonment – advocating genocide should carry a much stiffer penalty.”

Wertheim said the “biggest negatives” are the “good faith” and “in the public interest” defences that “would be available to anyone charged for advocacy of genocide under Section 80.3 of the Criminal Code”.

“Every conceivable circumstance in which a ‘good faith’ excuse might apply – such as an artistic work or academic presentation or a news or current affairs report – is one in which the requisite intention to ‘advocate’ genocide must necessarily be absent,” Wertheim said.

“The availability of the [public interest] defence would merely create an opportunity for such persons to use the ensuing trial, with impunity, as a public platform to further advocate genocide and to seek to justify it.

“These proposed defences are misconceived for this kind of offence, and should therefore be excluded in the draft legislation.”