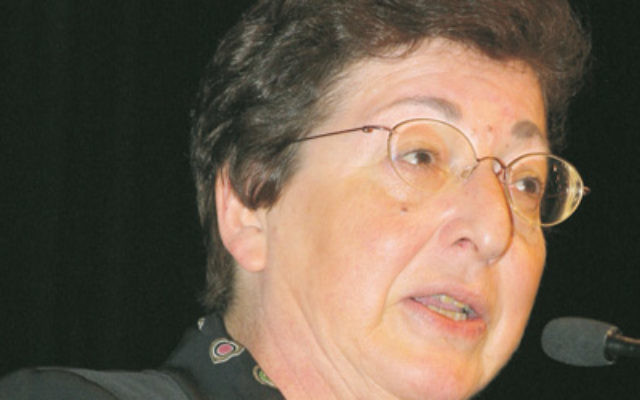 AN Australian branch of the New Israel Fund (NIF) will be established in June to coincide with the visit of Professor Naomi Chazan later this year.

Chazan is the president of the NIF. She was due to visit these shores last year, but her trip was cancelled amid accusations her organisation had actively supported the publication of the Goldstone Report, the discredited UN Human Rights Council investigation into the 2008-09 Gaza War. During her visit, Chazan, a social rights activist and former member of the Knesset, will attend  speaking engagements both within and outside the Jewish community.

She is due to be one of the keynote speakers at Sydney’s Limmud-Oz in June. The former Meretz Party representative is also scheduled to speak as part of a panel debate at the University of Melbourne’s Festival of Ideas and will appear at Melbourne’s Wheeler Centre.

The AJN understands NIF Australia will be formally launched while Chazan is here, with the group already setting up a Facebook page to gauge community interest in the organisation.

It is believed a prominent Sydney-based community leader will spearhead the group, with board positions due to be confirmed next week.

Focusing on causes as diverse as religious pluralism and civil rights, the NIF is a prominent Israeli social activist group. It has recently focused on challenging Knesset Bills it considers undemocratic, such as a law to allow small Israeli communities to reject certain individuals from moving into a neighbourhood.

In recent times, the NIF has come under fire from Professor Gerald Steinberg’s NGO Monitor, among others, for supporting organisations that advocate boycotts of Israeli products. Prof Steinberg has insinuated the NIF is anti-Zionist.

Chazan was supposed to visit Australia early last year as a guest of the Union for Progressive Judaism (UPJ). A mutual decision was taken by the UPJ and Chazan to pull the pin on the trip so she could focus fully on accusations by Israeli group Im Tirtzu that the NIF bankrolled Israeli critics of the Gaza War. According to UPJ, it was feared the controversy would overshadow the aim of the trip, which was to raise funds for Israel.

However, The AJN understands community leaders, including Dr Lamm, support the establishment of a local chapter of the NIF.