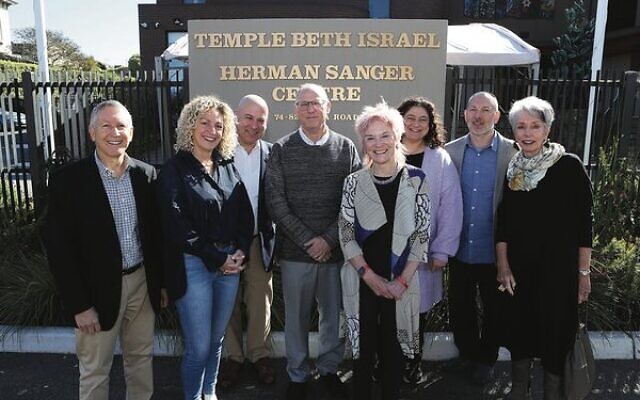 PROMISING reconciliation and inclusiveness at Temple Beth Israel (TBI), candidates from a group backed by two emeritus rabbis and seven past presidents made a clean sweep of executive and board positions at the strife-torn synagogue’s AGM on Monday night.

With Chaverim receiving 490 of 530 proxies, incoming president Michael Lawrence told the AGM it was “an overwhelming vote of confidence … From today, we move forward to a brighter future … The new board’s sole goal will be to ensure we have a unified, inclusive and stable synagogue.”

Lawrence, a TBI and Progressive Jewish communal stalwart, had spearheaded Chaverim, a grouping founded with support from emeritus rabbis John Levi and Fred Morgan. The respected rabbis had emailed members in June, accusing the previous board of “a culture of secrecy” and “unfortunate and inappropriate decisions … that have polarised our community”.

Along with Lawrence as president, members elected Jacky Magid and David Harris as vice-presidents, David Arkles as treasurer and Muffy Hand as secretary. All 12 executive and board positions were filled by Chaverim’s candidates. Of nine candidates vying for seven ordinary board positions, all successful candidates were from Chaverim. Five members of the previous board not facing re-election had resigned.

In a letter to congregants after the AGM, Lawrence described the High Holy Days as “a season for repair, and we begin repair today … we have already started the process to repair many relationships”.

Lawrence announced TBI cantor Michel Laloum will return for the High Holy Days. Laloum had been on leave after being investigated by a law firm engaged by the previous board over allegations of workplace bullying. But in July, the board briefed members that “none of the substantiated allegations constituted serious misconduct”.

Responding to a question at the AGM, outgoing president Joanne Loewy-Irons reiterated a claim that threats had been made, saying these had been reported to police “and evidence has been provided to them”.

An emotional Loewy-Irons said, “Nastiness mixed with scaremongering has torn asunder our sacred space. My remarks tonight are not sourness but an utter and unadulterated sadness … It is intolerable that some members are habitually passive-aggressive.”

Listing her board’s achievements, she said it employed an executive director, conducted a staff review, implemented workplace conflict resolution, organised a farewell for Rabbi Kim Ettlinger who resigned last year, and “with compassion entered a deed of separation with Rabbi [Gersh] Lazarow”.

Lawrence and Loewy-Irons both thanked Rabbi Gary Robuck for his current service to TBI as interim rabbi.

Contacted by The AJN, Union for Progressive Judaism co-president Brian Samuel stated afterwards that the Progressive roof body “congratulates the previous board … for handling what has been a very contentious and difficult year”, adding, “It’s pleasing to see a clean sweep and a brand new board of management under the leadership of Michael Lawrence … The new board is made up of people of various skills and I’m positive they will now start the healing process in all aspects.”