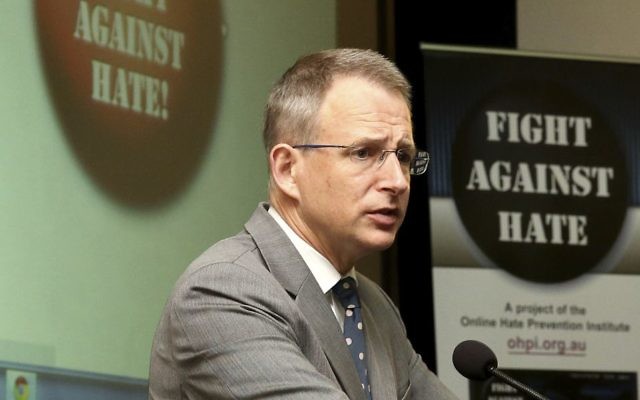 THE Online Hate Prevention Institute (OHPI) last week launched a new online tool, Fight Against Hate, set to revolutionise the way online anti-Semitism, and discrimination on the web more broadly, is dealt with.

The software was unveiled by Paul Fletcher, Parliamentary Secretary to the Minister for Communications, at Sydney’s B’nai B’rith Centre last Tuesday.

CEO of OHPI Andre Oboler told The AJN there is a pressing need for greater transparency when it comes to online hate, particularly with such a rise in the use of social media.

“We’ve seen a large increase in the number of incidents of online hate. Both anti-Semitism and cyberbullying – a whole range,” Oboler said.

He explained that currently, when an individual reports an incident to a platform provider, the only people who know about that report are the company and the person who reported it.

“At present there is no way for the public, civil society or governments to accurately judge how effective social media platforms are at removing hate speech which violates their terms of service,” he said.

With the advent of this new tool, users around the world are able to use the system to register reports of online hate, which are visible to experts in real time.

The system also monitors and reports on how the major social media platforms respond to users’ reports.

“We have a central database of all the online hate and that database can be tapped to look at the number of incidents, trends, what sort of hate is going up or down, new types of hate that are emerging … so we can get much better statistics,” Oboler explained.

He noted that while there are many organisations that tackle various forms of bullying or hate speech, online material can be more difficult to keep track of. “Right now we have a lot of organisations that deal with anti-racism work … but the minute it goes online, they don’t really have the capacity because of the technology gap,” he said.

He hopes Fight Against Hate, which has received backing from the Israeli government among other players, will circumvent this issue.

“The real benefit of this tool is that we’re making that data available to government agencies, to NGOs, to community organisations … for those people that are able to make the most use of it.”

The launch event included a panel discussion looking at various forms of online hate and their impact.

To use Fight Against Hate, visit www.fightagainsthate.com.