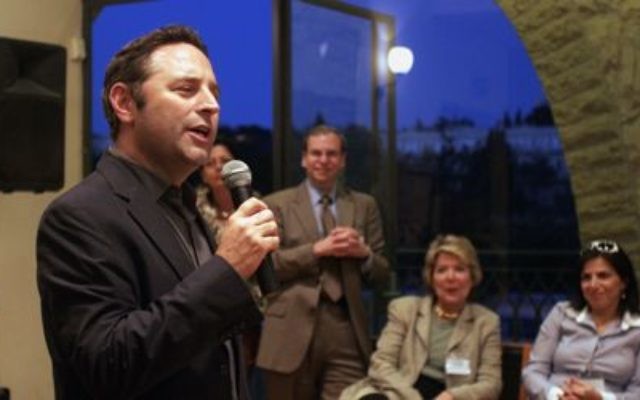 NEW Israel Fund CEO Daniel Sokatch visits Australia next week. In this special Q&A, The AJN lets you, our readers, be the journalists and ask him everything you’ve ever wanted to know.

What is NIF’s vision for Israel and the Jewish people and how are you working to achieve it?

Our vision for Israel is summed up in its Declaration of Independence. We believe that Israel can live up to its founders’ vision of  a state that ensures equality of social and political rights to all its inhabitants, and that is both the Jewish state and a tolerant, pluralistic shared society.

The New Israel Fund has long operationalised this mission by investing in hundreds of Israeli organisations whose work has the most impact on civil rights, religious pluralism, social justice and environmental defence. And we are not only funders. We organise, we advocate, we train, we convene. We help Israelis build a society committed to a vision of a democratic, just and equal Israel.

What does NIF say should be done to advance the peace process?

The New Israel Fund is not a “peace group”; we take no position on the many issues that must be resolved in final negotiations. However, reflecting our core values of democracy and equality, we support two states for two peoples and we oppose the occupation and the settlement enterprise.

We believe that a democratic, pluralistic and just society can find the will and courage to make peace, and we work to strengthen democratic institutions and organisations. That commitment is manifested in our support for Israelis with many different points of view. For example, we support the Council for Peace and Security, a group of former generals and other military leaders working towards a two-state solution. We support Banish the Darkness, a coalition of religious organisations that opposes the “price tag” violence committed by extremist settlers. We support Breaking the Silence, which represents the voices of combat soldiers in the territories exploring the price they themselves pay for enforcing the occupation. And we support various human rights organisations, including B’Tselem, HaMoked and Yesh Din, which monitor and litigate human rights abuses in the territories.

While the work of NIF is admirable, is there a case for not hanging out dirty washing in public and giving succor to Israel’s enemies, or is Israel’s democracy strong enough to go beyond such thinking?

I understand, professionally and personally, why it is difficult to see criticism or publicity about Israel’s challenges in the public square. But it’s impossible to talk about social change without illuminating the issues that need airing and debate. And yes, some of those issues are used by Israel’s adversaries.

But this is true in every democracy. In Australia, pretending that there are no issues concerning Aboriginal Australians will not resolve those issues. In the U.S., when our leading civil rights group publicised photos of abuses by American troops at Abu Ghraib, that tarred America’s image around the world, but it also led to necessary policy changes.

Israel is a democracy that looks to us, Diaspora Jews, for support. We need to express our support consistently with our democratic and egalitarian values, and that means being honest about Israel today and helping Israelis build a better Israel for tomorrow.

In its recent advert in the New York Times, one of the most anti-Israel newspapers in the world, why did NIF use such divisive and inflammatory language regarding Israel?

I respectfully disagree about the New York Times, which has covered Israel carefully and with much attention to different points of view for three generations. The issues of religious extremism and exclusion of women in Israel have been covered in many American newspapers and by CNN – and they are a key concern of the NIF. That advert attracted much attention and also specifically praised the many Israelis dedicated to finding fair solutions to these issues. It also garnered hundreds of new supporters for the NIF – and for Israelis fighting for women’s rights in Israel.

Why does NIF continue to fund the Arab-Israeli organisation Adalah, some of whose members have expressed views inconsistent with support for Israel as a Jewish state?

Yehudit Carp, former Deputy Attorney General of Israel, wrote an op-ed in The Times of Israel recently that answers this question very well.

Hassan Jabareen, Adalah’s executive director, recently received the Gorny Prize for a human rights organisation from the Israeli Association of Public Law. Then Israeli High Court Judge Ayala Procaccia hailed him as a human rights leader “of the highest calibre” at “the highest intellectual and judicial level” who has served the “Israeli public and the country’s constitutional democracy”.

Adalah is the leading Arab Israeli civil rights group, and its mandate is to remedy pervasive discrimination against Israel’s Arab minority, acknowledged by successive Israeli governments. While we may not agree with everything said by individual members of Adalah (or any of our grantees), we are proud to be their funder and partner.

What steps has NIF taken to ensure that fundamental mistakes in funding to NGOs such as CWP and Mada al-Carmel – leaders in BDS and demonisation – will not be repeated?

In the past, both CWP and Mada made significant contributions in areas that NIF has always supported. CWP, for example, began to support global BDS relatively recently and let’s remember that the global BDS movement was almost invisible until a few years ago. As it became problematic for Israel and the Jews worldwide, we adopted a guideline that states we will not fund organisations engaged in such activity. We have applied it as funding cycles come up for renewal and will continue to apply it.

“Demonisation” is a phrase that is often used to describe any criticism of Israeli government policy, including support for the occupation and settlements, and we reject that frame. Like most responsible funders worldwide, we do not ask our grantees to march in lockstep with NIF on every issue. What we do ask is that organisations not work against our principles and of course comply with our funding guidelines.

Unlike Naomi Chazan, who visited Australia last June, David Landau is not a representative of NIF. He is a free-thinking commentator and one of the most respected English-language journalists in Israel, with insider access to the corridors of power in Jerusalem, London and Washington. His Zionist credentials are beyond doubt. His visit attracted more than 1200 people and scores of new donors to NIF. Ultimately, Australian Jews voted with their feet and their money.

The Israeli Ambassador defended Landau’s right to be heard at the November AGM of the Executive Council of Australian Jewry, saying words to effect that everyone in the community, on the left or right, has a role to play and that those on the left are often more useful interlocutors for Israel. He cited as an example Naomi Chazan, who spoke most effectively against BDS last year in Sydney’s Inner West.

As noted in <I>The Forward<P> newspaper, NIF was the only Jewish organisation outside Israel to support the social justice protests last year, a watershed event in Israel that continues to influence the public agenda.

We continue to support efforts to close the social and economic gaps in Israel. And we actively solicit support for our programs in Israel; thousands of Diaspora Jews have signed up for our Action Alerts and take action on specific issues.

The hundreds of organisations and thousands of Israelis supported by the New Israel Fund provide voice and visibility to those on the margins of Israeli society. From Orthodox feminists to gay parents, from Ethiopian immigrants to African refugees, from Bedouin in the Negev to at-risk youth in development towns, we empower millions of Israelis to stand up for their rights. It is their stories, and successes, of which I am most proud.

Daniel Sokatch is speaking in Sydney on May 20 at the Shalom Institute and May 21 at Newtown Synagogue Community Hall. He is speaking at 7 Selwyn Street, Elsternwick, in Melbourne on May 23. For more details see www.nif.org.au.