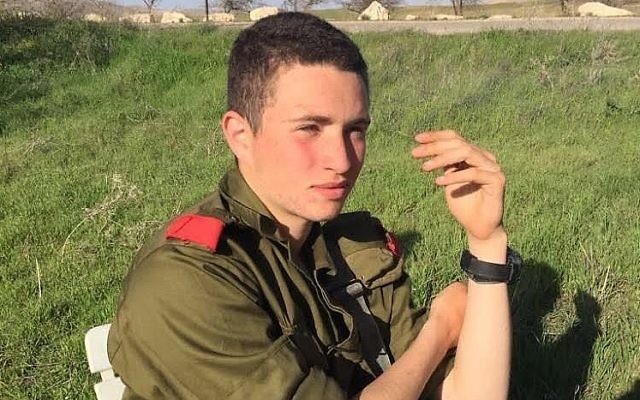 Ron Yitzhak Kokia, an IDF soldier who was stabbed to death in a terrorist attack in Israel on November 30. Photo: IDF

HE was waiting for a ride to go home for the weekend, but instead of getting picked up and seeing his loved ones, Ron Kokia was brutally killed in Israel’s latest terrorist attack.

At the Kokia family home in Tel Aviv, a stream of people has been mourning the 19-year-old this week. Two Bedouin Israelis have been arrested in connection with the attack.

Hundreds of people went to Kokia’s funeral, where he was described as a loving brother and son, and a committed soldier who was in the middle of his national service.

He went beyond the call of duty, said his commander Yoav Katzenelson, recalling that he recently cut a holiday short to take part in an exercise.

The main security focus this week was Israel’s border with Syria. A dozen Iranian soldiers are reportedly dead, an Iranian arms depot near Damascus is said to be destroyed, and fingers are being pointed at Israel.

The strike took place on Saturday, just south of Damascus, and on Monday there were unconfirmed reports that missiles were fired at a Syrian military facility, also near Damascus. Israel is not confirming or denying involvement.

News of the strike came as Israel was intensifying its war of words regarding Iranian power in Syria. “My friends, one day the Iranian regime will fall,” Israel’s Prime Minister Benjamin Netanyahu said in a message to a Washington conference on Sunday. “Israel will be first in line to restore relations and rebuild our great partnership.”

Until then, Netanyahu said, take the Iranian regime at its word, and apply the message when deciding what to do in Syria. “When tyrants call for the destruction my people, I believe them. I don’t have the luxury of discounting their genocidal threats,” the Israeli PM said, before reiterating Israel’s policy on Iranian presence in Syria.

Israel’s ambassador to the United States, Ron Dermer, suggested this week that war could be close with the key Iranian proxy Hezbollah. “If Iran is not rolled back in Syria, then the chances of military confrontation are growing,” he said in an interview. “I don’t want to tell you by the year or by the month. I’d say even by the week.”

The comments come amid Israeli frustrations over ceasefire arrangements in Syria that the US has reached with Russia, which still allow Iranian soldiers within a five to 10 kilometre distance from the border, and over Russia involving Iran in talks about Syria post-war.