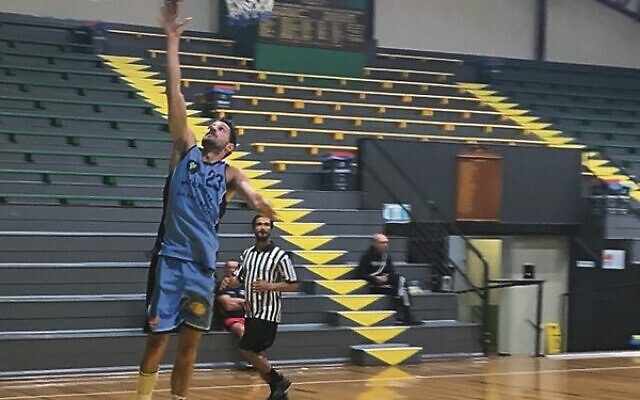 In what is believed to be a first for a Maccabi NSW Basketball Club men’s player, Marcel Ninio scored an incredible 61 points last Monday night in the Maccabi Lakers’ 101-74 win over the MVP Cheetahs in round 4 of the City of Sydney season two Men’s Premier League.

He was well supported by forwards Jake Sharwood (15 points) and former Sydney Kings player Ben Knight (13 points), who is a player-coach for the team, while Matt Joffee, Ilan Stern, Zac Ehrenfeld and Ethan Kalish had a strong game in defence.

The win lifted the Lakers to second on the ladder, on three wins and a bye, with seven rounds remaining.

In their previous two wins, Ninio also top-scored for his team, with 35 points and 44 points.

When asked how he did it, Ninio told The AJN “I’m not really sure – sometimes you just go on these scoring sprees.

“But the team has been winning and playing well together, so we went into the game with some confidence, which always helps.

“And we were actually trailing by 10 points at half-time, so it was quite a competitive contest until about 10 minutes to go, and that always makes you play better, to try and get that win.

“But now that I’m averaging about 47 points per game, I’m pretty sure I won’t be able to keep that going for too much longer!”

Ninio acknowledged that the Lakers are yet to play the competition frontrunners, but are on track to remain very competitive this season, and are aiming to go deep.

“We only just missed out on the finals last season, by one place, and we have a committed group who all play for each other.

“And we’re lucky to have Ben [Knight], who remains phenomenal for our club, and runs our joint training sessions with our two Division 1 teams.”

In the 11-team Division 1 competition, the Maccabi Rockets rose to second spot with a 67-57 victory over UNSW White, with Beck Rosen top-scoring with 26 points, and Ethan Kalish chipping in with 17.

The Maccabi Kings are not far away in fifth place, after outlasting KHY 52-45 on Monday night. Larry Wagenheim (14 points) and Simon Platt (11) were their top scorers.

Meanwhile, in men’s masters action, Ben Shapiro scored 26 points for the Maccabi Mishpoochas in their 49-33 win over the Newtown Knaves 49-33 in division 2, and in division 3, Maccabi Benny’s Ball fell 28-34 to the Inner City Hawkes.