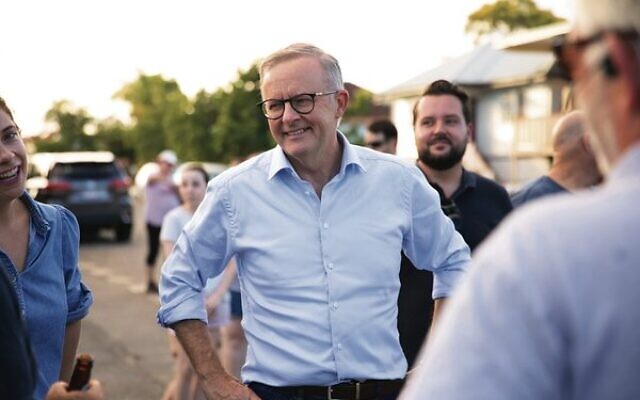 Labor will ensure that any decision it takes in regard to the Israel-Palestinian issue “contributes to a peaceful resolution of the conflict and to progress towards a two-state solution”, Federal Opposition leader Anthony Albanese told The AJN this week.

With the federal election a little over two weeks away, The AJN put a series of questions to the Labor leader, who on current polling looks likely to win the keys to the Lodge on May 21. The questions were responded to by email.

Asked about a 2018 resolution to recognise a state of Palestine being elevated to the party’s platform last year, Albanese insisted it “has no greater or lesser weight” than it did previously.

“There was no sudden change to our platform last year,” he said, clarifying that Labor continues to support a two-state solution based on the right of Israel to live in peace within secure borders and reflecting the aspirations of the Palestinians to statehood.

“Labor’s national platform makes clear the desire of the conference to recognise Palestine as a state while acknowledging this will ultimately be a matter for a future Labor government,” Albanese said.

“And Labor governments have always understood that any just and lasting resolution to the Middle East conflict cannot be at the expense of either Palestinians or Israelis. The only way that a two-state solution can be achieved is through a negotiated outcome between the two parties.”

Asked why no senior Labor figure condemned the Sydney Festival boycott earlier this year, he replied, “When a campaign’s sole purpose is to seek attention, sometimes the smartest thing to do is not to give it the attention it’s asking for.”

“Whenever asked about BDS I have been totally consistent in my opposition to it,” he added.

“My opposition to BDS is something I’ve been passionate about, and I have advocated against BDS for a very long time – long before I became leader of the Labor Party.

“I led the campaign to make sure that when Marrickville Council, my local council in Sydney’s inner west, adopted support for the BDS in 2010, it was overturned. I worked very closely with Jewish community leaders to make sure that decision was reversed.”

Albanese also expressed Labor’s “proud support” of the International Holocaust Remembrance Alliance (IHRA) Working Definition of Antisemitism, though did not respond to a question about criticism of Israel by some in Labor that contravenes its examples.

“We are acutely aware of the scourge of antisemitism, and Labor is committed to calling out and taking action against it and all other forms of racism wherever they appear,” he said.

“It is important, and disturbing, to read the many instances of antisemitism documented by the Executive Council of Australian Jewry in their annual report. This shows the importance of extending our anti-discrimination framework beyond existing protections based on race to protect people of faith in Australia.”

But Albanese said in ending vilification and discrimination on the basis of faith, “We must not diminish protections for other people in our society.”

“A Labor government will act to prevent discrimination against people of faith, including anti-vilification protections,” he added, while maintaining the right of religious schools to preference people of their faith when selecting staff.

“Labor understands the need for Jewish schools to be able to preference Jewish teachers in order … to teach the next generation of Jewish Australians according to Jewish values and culture.”

Albanese added, “It was disappointing that the legislation offered by the Morrison-Joyce government was produced at the last minute, without meaningful consultation with the Labor Party, and failed to deliver on important public and private commitments the Prime Minister made.”

On communal security, the Opposition leader said Labor believes that “we should always be examining how to make our communities safer, particularly in the face of changing threats, including the very disturbing rise of right-wing extremism over recent years”.

“An Albanese Labor Government will consider changes to the Safer Communities Fund to address concerns raised by the Jewish community about the increasing cost of maintaining community security as threat levels increase,” he said.

Generally speaking, Albanese said he considered himself to have been “very fortunate to engage constructively” with the Jewish community during his time and in various roles in parliament.

“In particular, I have found the annual visit to the parliament of the Australasian Union of Jewish Students to be an opportunity to engage constructively with younger members of the community,” he said.

“In all my engagement, the strong interest in social justice is what has led many Australian Jews to have found a ready home in the ALP. In fact, the Labor Party, historically, has had the most Jewish members of parliament. I think that speaks very much to the strong relationship of values that we share.”

He said a Labor government he leads “will seek to unite, not divide”.

“I will always tell it how it is and work hard to deliver for Jewish Australians and all Australians,” he said.