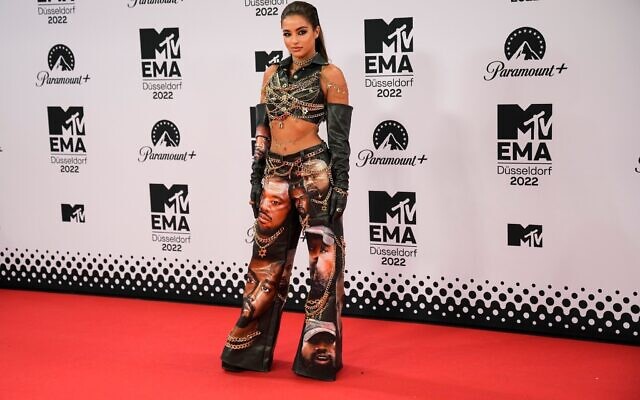 Israeli pop star Noa Kirel arrived at the European MTV Awards 2022 in Dusseldorf, Germany wearing an outfit adorned with the face of rapper Kanye West and dozens of gold chains with the Star of David and the Chai symbol.

West, also known as Ye, has drawn harsh criticism and denouncement for a series of antisemitic comments in recent weeks that have also led to dropped partnerships with a host of brands including Adidas.

Kirel said she chose to wear the outfit as “a fashion item with a message for the whole world; an item that signals that I am both Jewish and Israeli. We have been experiencing a lot of antisemitism, especially in light of Kanye West’s statements. I am proud to be an Israeli artist who represents Israel in the world,” she was quoted as saying by public broadcaster Kan.

Just before the show, Kirel posted a photo on her Instagram story of herself covered by a blanket, writing: “Are Ye ready?” Her fashion stylist told Kan that the pop star wanted “a crazy outfit, something everyone would remember.”

Kirel, who will represent Israel at the Eurovision song contest next year, won Best Israeli Act at the MTV European Awards for the fifth-straight year and was representing Israel at the event.

Her eye-catching outfit garnered a fair amount of online chatter, with many Israelis and Jews praising the singer for her statement. Others who were unfamiliar with Kirel wondered at first if her outfit was a message of support or condemnation of West.

A range of memes also quickly rolled in, with many comparing Kirel to former minister Miri Regev, who famously wore a dress adorned with the skyline of Jerusalem to the Cannes Film Festival in 2017. Others depicted Kanye wearing an outfit covered in the face of Mergui, Kirel’s ex-boyfriend.

Kirel, 21, is one of Israel’s most famous current pop singers, known for her hit singles Pouch, Million Dollar and Tikitas. She is regularly in demand at events across Israel and the subject of intense paparazzi coverage. Kirel completed her IDF service earlier this year after serving as part of its talent track, performing for troops and pursuing a career at the same time.

West, meanwhile, has been embroiled in controversy ever since Balenciaga’s Paris Fashion Week show last month, during which he debuted a line of White Lives Matter shirts.

The controversial slogan has been described by the Anti-Defamation League as a “white supremacist phrase.”

Since then, the rapper and fashion mogul has spouted antisemitic sentiment across social media and in news interviews, including vowing to go “death con 3 on Jewish people” and claiming that he is the target of a “Jewish underground media mafia.”

He was temporarily suspended from both Twitter and Instagram and has been dropped by Adidas, his talent agency CAA, and the MRC studio.

On Saturday, Saturday Night Live aired a show in which comedian Dave Chappelle addressed the controversy surrounding West and appeared to defend him.

In his lengthy monologue, Chappelle danced along the lines he was mocking West for, emphasising that he was not antisemitic while arguing that “it’s not a crazy thing to think” that Jews control Hollywood and insinuating that Jews have been making Black people into scapegoats for their past trauma.