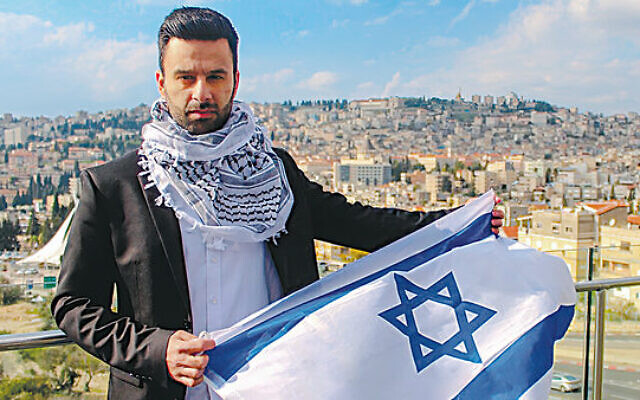 Yoseph Haddad proudly holding the Israeli flag in his home city of Nazareth.

Military service is not compulsory in Israel for non-Jewish citizens, but Yoseph Haddad – a Christian Israeli-Arab – strongly felt it was his duty, so he chose to join the Israel Defence Forces (IDF) when he turned 18 in 2003. Soon after he was selected into the elite Golani Brigade.

After sustaining a serious injury during the Second Lebanon War in 2006, Haddad required many surgeries, and a year of rehabilitation.

Following a successful business career, in 2018 he founded and became CEO of not-for-profit organisation Together – Vouch For Each Other, dedicated to bridging gaps in Israeli society between Jews, Arabs, Christians, Druze, Baha’i and citizens from other minority groups.

He is also a correspondent on Israel’s i24 News channel, reporting in both Arabic and English, and actively campaigns against the BDS movement, antisemitism, and racism in all its forms.

On October 13 this year, Haddad made US Jewish newspaper, The Algemeiner Journal’s, top 100 list of people positively influencing Jewish life in 2021.

“As an Israeli-Arab, this is especially exciting, and encourages me to continue on my path of cooperation between Jews and Arabs in Israel,” Haddad said of that honour. 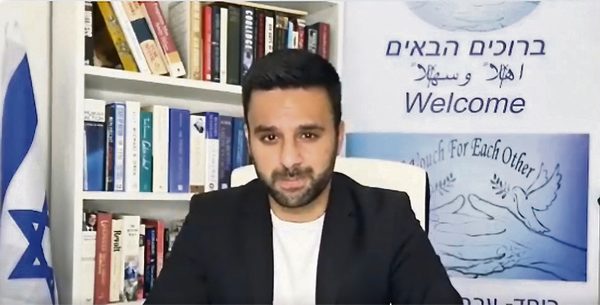 Yoseph Haddad during a webinar hosted by ZDVO Australia in August this year.

A proud member of ZDVO Beit Halochem, Haddad was a special guest in a recent ZDVO webinar, shedding light on what inspired his Israel advocacy journey.

Below are key excerpts from that address:

My childhood [experiences] literally allowed me to see the real model of Israeli society … and its potential.

I was born in the city of Haifa – the biggest mixed city in Israel – and grew up in Nazareth, Israel’s biggest Arab city.

I loved football, so I’d catch the bus after school to play in Haifa, with Jewish, Christian and Muslim kids.

We had no differences, we just enjoyed playing football together, and step by step became friends off the field, coming over for Chanukah, and Christmas.

I wasn’t naive – back then racism and antisemitism were there from all sides … as it still is. But the haters are the minority … they are just louder now [through social media platforms], and that’s our problem.

But I saw how, when we cross bridges and reach out, we can understand each other much better.

I decided to volunteer in the IDF [when 18] because it is the Israeli Defence Forces, not the Jewish Defence Forces … it defends the country from terrorist attacks on both Arabs and Jews.

Terrorism doesn’t discriminate by faith … you are targeted just because you’re an Israeli.

A year into my service, I became a commander [leading a unit of] Jewish soldiers – right in your face BDS!

During the Second Lebanon War, a lot of people – especially from the Arab sector – asked me how it felt to go, “fight your Arab brothers”. I’d always say, “I’m not … I am fighting Hezbollah, a terrorist organisation.”

In that war, rockets launched by Hezbollah killed 44 Israeli civilians, of whom half were Israeli-Arab Muslims, including some from my city, Nazareth.

I always felt I needed to do something for my society to make it better, so three years ago I founded Together – Vouch For Each Other. And one of the targets is to go out and speak about Israel, as a member of a minority group, to fight against those who twist the facts and lie about Israel, just because it is Israel.

By doing that, we are fighting racism and antisemitism at the same time.

And in my job as an i24 News reporter, I reveal the true stories of Israeli-Arab society, and Israeli society in general. Some of my videos [posted on social media] have gotten millions of views.

The people in the BDS movement who refer to Israel as an apartheid state – either they know they’re lying, or they are simply ignorant, and are taking the definition of apartheid and completely changing it.

So our job is to put a light on that, and show them the real facts.

Yes, there is an Israeli-Palestinian conflict, and there are also problems within our [Israel’s] society. But in Israel, I can be whatever I want to be. There are more than 15 Members of the Knesset who are Arabs, the chairman of Israel’s biggest bank is an Arab, as is the captain of Israel’s men’s football team.

Using facts is the best way to combat them [BDS supporters], and it is an ongoing battle, but we will continue to fight back.

In 2019, the United Nations’ Special Rapporteur on Freedom of Religion or Belief, Dr Ahmed Shaheed, published, and presented to the UN General Assembly, the first ever UN human rights report wholly dedicated to the issue of antisemitism.

This landmark report by the former Maldives foreign minister and academic –who is now based in the UK – recognised that antisemitism is a serious human rights problem with unique characteristics, and that incidents of antisemitism are increasing around the world, requiring action.

On July 15 this year, Shaheed addressed, via Zoom, Israel’s 7th Global Forum for Combating Antisemitism, describing participating in the biennial international conference as an honour, and antisemitism as, “a symptom of a deep dysfunction in society, and a poison that subverts democracy”.

Just weeks prior, as a guest speaker at the American Jewish Committee’s (AJC) 2021 Global Forum, Shaheed was personally recognised by Felice Gaer, director of the AJC’s Jacob Blaustein Institute for the Advancement of Human Rights (JBI), not only for his, “conviction and courage” in advocating for human rights on the global stage, but also for identifying, “the danger of antisemitism in a way that none of your UN predecessors did”.

“You called on governments, companies, and even the UN, to do more to fight antisemitism,” Gaer said.

When asked what drove him to produce the historic UN report on antisemitism, Shaheed’s answer was powerful and inspiring:

I found a serious lack of attention to human rights violations faced by Jewish communities, in the work of my UN mandate.

It is very strange, given the fact that one of the key factors in the rise of religious hatred globally was violence against Jews.

The number of attacks targeting Jews is not only heartbreaking, but is disproportionately high, and this required a response.

Antisemitism is often propagated by influential political leaders. It is the oldest form of religious hatred. It is global. It occurs across the entire political spectrum, and it is growing.

Although it takes many forms, at its core is a conspiracy theory, a scapegoating, a dehumanisation that is egregious, and highly destructive of democracy.

Of course, parts of the UN fan the flames of this intolerance, and reforms are needed to ensure that Israel is not treated any differently than other member states.

Human rights is not a zero sum political game … some parts of the UN, less open to political abuses, are already playing helpful roles.

My report called on the UN Secretariat to take the lead in combating antisemitism through education, awareness-raising, promoting peer-to-peer learning, to use the International Holocaust Remembrance Alliance’s working definition of antisemitism as a non-legal tool to combat antisemitism as a global human rights challenge, and to not regard antisemitism as a threat to Jews alone.

I want to thank the JBI, and other members of the various Jewish communities worldwide, for your cooperation while I worked on my UN report.

And by no means am I finished raising the issue of antisemitism.

I will go to the UN Human Rights Council and present an action plan on how to combat antisemitism before my mandate is up [on October 31] next year.

And I shall work on this well beyond my UN tenure. 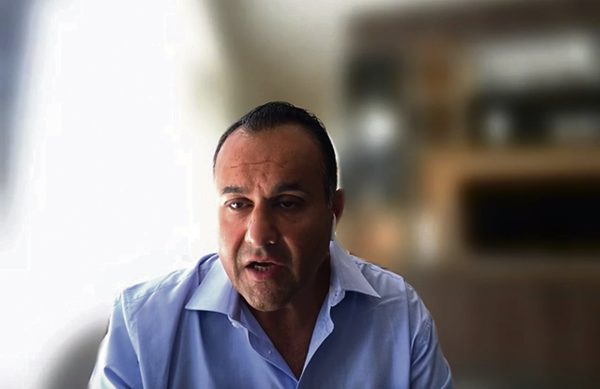 Fiyaz Mughal addressing an online March of the Living Australia event in August.

Fiyaz Mughal is the founder and trustee of Muslims Against Antisemitism.

He was director of Faith Matters from 2005 to 2020, and in 2009 he was named an Officer of the Order of the British Empire for his interfaith work promoting coexistence and social cohesion.

Mughal has dedicated much of his career to making practical contributions to ongoing efforts to counter Islamist extremism, antisemitism, and hate crimes.

So, how did he get into that line of work, and why did he form Muslims Against Antisemitism?

In a webinar in mid-August hosted by March of the Living Australia, Mughal revealed he had a life-changing experience when he became an elected councillor in Oxford, England, in 2002.

“The Gaza conflict was happening, and I noticed there was a lot of antisemitic discourse starting to take place within Oxford – a very affluent and liberal city,” Mughal said.

“Members of the local Jewish community were coming to see me to say they were very fearful, and that pained me.

“I felt that some members of other minority communities were targeting the Jewish community and promoting antisemitism.

“I realised we needed action to reduce the volume of hatred, and try to build bridges and dialogue.

“What happened then affected my future working life – it was the direction I took from then on.”

Mughal described Islamism as a skewed, mutated and extremely dangerous and politicised version of the faith of Islam – “exceptionally different to the Islam I know”.

He added, tragically, that within that skewed melting pot of faith and politics, “Those who want to see the destruction or removal of the State of Israel, and of self-determination by Jews, have become the most vocal and influential parts.”

Stressing that a “vacuum of leadership within Islamic and theological circles globally” has led to an increased risk of extremist groups being able to manipulate religious texts to fuel hatred – including antisemitism – to suit their agendas, Mughal said, “I feel like Muslims like myself need to step up in this battle of ideas – otherwise we are going to have a clash.”

“The fact is, we can’t allow the dominoes to fall where people are constantly pushing divides.

“If we don’t push back, we’re in very serious trouble.

“We all frankly deserve better.”