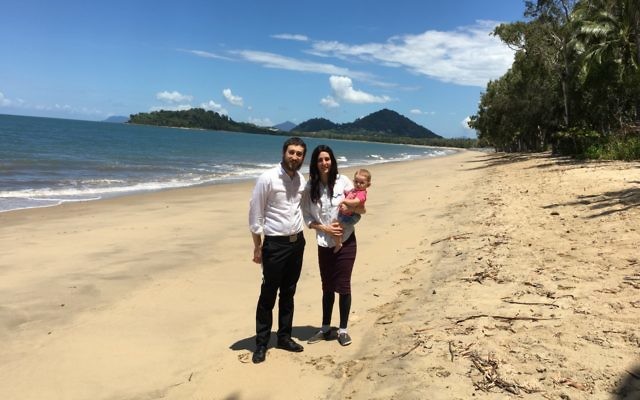 JEWISH residents and travellers in Northern Queensland will for the first time have a permanent Chabad presence in the area with the appointment of Rabbi Ari and Mushkie Rubin as shlichim.

Under the auspices of Chabad of RARA (Regional and Rural Australia), the role will see the Rubins based primarily in Cairns and Townsville, though visiting other locations as well.

It is estimated that there are approximately 1000 Jews living across Northern Queensland. Chabad of RARA has been servicing these communities for more than 20 years, but with a steadily growing number of contacts, founder Shaul Spigler saw the demand to establish a permanent Chabad House – marking the first time Chabad of RARA has done so in any of the areas it serves around Australia.

“It’s very much a growing community,” Rabbi Rubin said. “There are also a lot of tourists. That’s going to be a big part of our work here, and Israeli backpackers.”

He explained that he and wife Mushkie plan to run a variety of regular activities in Cairns and Townsville, including Hebrew learning for children, adult education classes, weekly barbecues on campus at James Cook University, and “Mummy and Me” for new parents.

Moreover, they have plans to start a kosher catering service to make kosher food more accessible to locals and visitors to the area.

Smaller towns such as Mackay and Airlie beach will receive periodic visits, during which the shlichim will hold events marking different festivals.

Rabbi Rubin, 27, was born in America, but grew up in Melbourne, where he attended Yeshivah College. After studying in the Yeshivah Gedolah, he spent time learning at rabbinical schools around the world including in London, New York and Israel.

Mushkie is from Jerusalem, and the couple have a 10-month-old daughter, Devorah Leah.

Chabad of RARA is committed to providing for the spiritual, emotional and material needs of Jewish people living away from Jewish centres. They travel around Australia in a kosher campervan which serves as a synagogue on wheels, a library, and more.

Rabbi Rubin explained that Chabad of RARA operates on the value that no Jew gets left behind.

“We’re all willing to do whatever it takes to see that,” he enthused.