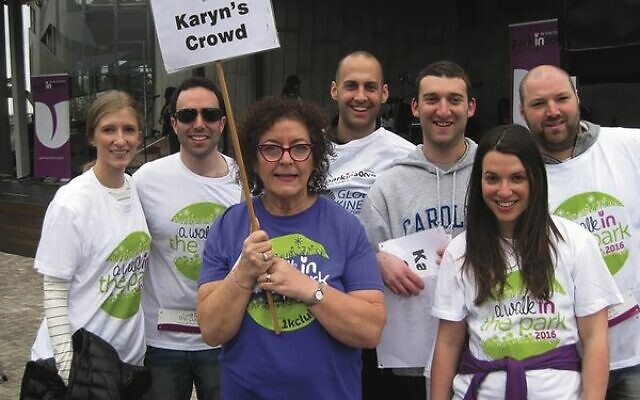 Karen Spilberg and supporters at A Walk in the Park in 2016.

KARYN Spilberg and Isa Adams each have powerful stories to tell. While the two Jewish community members, both aged 63, are certainly not defined by their Parkinson’s, the challenges they do face in relation to the debilitating disease often become their own triumphs.

Adams always had a benign tremor in her right hand, as did some members of her family, but when she turned 49, she noticed a change to her tremor. Understanding what Parkinson’s looks like due to watching both her mother-in-law and father-in-law suffer from the disease, she had a good idea that it would be her diagnosis.

“It has been a long journey, a difficult journey,” she said, “As there is no cure, I do everything possible that will delay the Parkinson’s progression.”

The go-getter does tap dancing, as well as an Israeli dance class twice a week and ballroom dancing once a week over Zoom, walks every day and, before lockdowns, would head to the gym three times a week. “Everything helps,” she said. 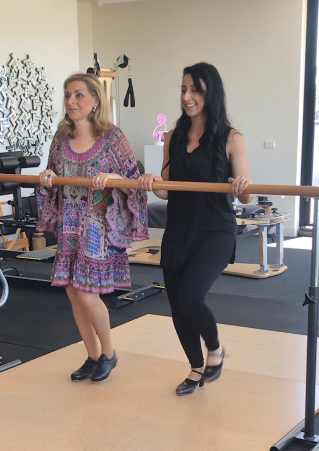 Isa Adams (left) during one of her dance lessons prior to lockdown.

“I used to make outrageous quilts and loved to embellish the fabric with embroidery and beading,” she recalled. “One of the first questions that I asked the neurologist was will he be able to control my Parkinson’s so that I can make quilts.”

Thirteen years later, Adams is unable to make her beloved quilts. “I can’t sew or cut straight anymore as my Parkinson’s put an end to that,” she lamented, but added that she has found new ways to continue her creative projects.

She wants to spread awareness about the degenerative disease that currently has no cure. “I want people to understand that we need to keep moving and to be active,” she said, “It’s not easy living with Parkinson’s, it is a difficult experience.”

Thanking the instructors at Parkinson’s Victoria who take care of her and the Parkinson’s community, Adams is hoping to raise the necessary funds to help others in her position.

Spilberg first discovered that something was wrong, when she was 44. She was walking with a friend who spotted that she wasn’t swinging her arms as she walked. Spilberg looked at her shadow, and saw that her left arm was hanging, and her left foot was dragging. She saw a neurologist the next day, who diagnosed her on the spot – a rarity for a young woman who did not present tremors.

Spilberg, whose father also had Parkinson’s, said, “His last year with it was my first. Being a ‘glass full’ person, I saw it as a different type of Parkinson’s to what I had. I have never dwelled on it.”

She described her journey as a positive experience.

Over the last two decades, Spilberg has been able to travel the world, attending many Parkinson’s Conferences; founded Young@Park, a Melbourne-based organisation which works to connect young people with Parkinson’s; rode a bike around Vietnam, as part of Team Parkinson’s, raising awareness and funds; been awarded The Zelman Cowan Award; represented People living With Parkinson’s (PLWP) on the board of Parkinson’s Victoria for six years; been an ambassador for The Walk in the Park and for The WPC in Kyoto; had her Deep Brain Stimulation (DBS) surgery filmed for Prime TV and mentored newly-diagnosed people. Prior to her diagnosis, Spilberg was an ESL teacher.

She first became involved with Parkinson’s Victoria, after she noticed that there were no support groups for Young Onset Parkinson’s, which led her to form Young@Park. “I met many PLWP and their partners, who had never met another person with Parkinson’s,” she said.

Spilberg hopes that she has helped people to understand that it is not only an “Old Man’s Disease,” and has raised thousands of dollars for Parkinson’s Victoria.

In a show of support for the more than 27,000 Victorians live with the condition, Parkinson’s Victoria is running 27forParkinson’s next month, calling on people to unite as a community each day for 27 days, inspiring each other to get active, get connected or make a positive change in their lives.

For more information and to register, visit 27forParkinsons.org.au