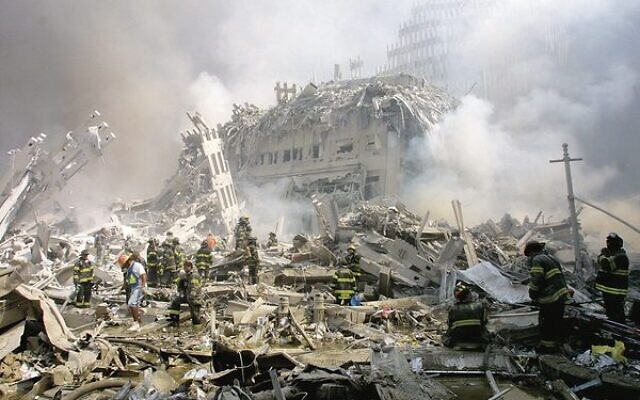 Firefighters make their way through the rubble of New York's Twin Towers after the 9/11 attacks in 2001. Photo: AP Photo/Shawn Baldwin

SEVENTY-SIX years have passed since World War II ended and nothing has changed. My name is Eva, just an ordinary Australian citizen born in December 1946 to parents who were Holocaust survivors.

I am not a scholar, nor a highly educated person or a high achiever, just an average person who thinks and wonders …

Why is there such a need for this hate and suffering, what does it achieve and why can’t people let it rest?

I may not have lived through the Holocaust as I was born when the war was over, but I did hear and learn a lot about it.

Six million people perished, Jews … but there were millions of others who died from other walks of life and backgrounds, from different religions, of different colour and with different beliefs.

For years, while all that torture and misery was going on, life continued as normal in most countries – playing sport, enjoying music and theatre, dining out and many other events.

It was only towards the end that many nations committed themselves to try and help rescue the few that survived.

Sadly, countless soldiers also lost their lives in their bid to bring back some normality to the world.

People lived through horrendous times, sharing their experiences with their children and families. But nothing has improved and nothing has been learned or changed. Here we are, 75 years later, and hate is still on the rampage everywhere.

Watching the stories unfolding in New York a few weeks ago, on September 11, 2021 – 20 years after the Al-Qaeda attacks – it is clear that the horrific human loss and sadness that this event caused, is still today very much etched in all our memories, in particular of those caught up in the tragedy, or who lost loved ones.

It also tells me that nothing was learned by the angry fanatics that caused all this.

They don’t see that their horrific actions achieved nothing, that it is time to move on and accept that violence is not the answer, that we should be seeking to make this world a better place.

The anniversary brought out in me the desire to point out to the world that there is a need to wake up and to start to learn from history. I feel in my heart that all the signs are there that we are not moving forwards or in the right direction in any way.

Today, there are probably many more then six million people scattered all over the world, suffering in terrible conditions and circumstances.

All they wish for is a stable and peaceful life with family and friends, people that accept that peace and harmony is the name of the game.

Life just rolls on, just as it did all those decades ago, with football, soccer, tennis and many other social events carrying on as normal, and very few in the world are aware or noticing the suffering and hardship endured by many.

Why can’t people move on?

Why do they still carry such hatred towards minority groups and want to force their belief onto others? Why is it not possible to adopt a ‘live and let live’ theory?

Why is it not possible to accept that ‘peace and harmony’ would only make the world a better place, for them and for everyone on this planet?

Why can’t the human race accept all religions and respect the needs of all individuals, and see that not all things written in their bibles many centuries ago cannot be followed to the letter in modern times?

Accept that they can be interpreted or adapted to the age we live in and understand that people today look and see life with different eyes.

What does the Taliban think that they will achieve longterm by going back 20 years to where they were – tormenting the population of Afghanistan, causing horrendous pain and suffering to a nation where the majority of the people only want to live a peaceful and harmonious life?

Why don’t they accept women as valuable contributors to this modern world, instead of living in the dark ages and treating them as slaves? Wouldn’t everyone benefit, including them?

I am not a religious person in any shape or form, but I feel that perhaps there is a message in this terrible virus that the world has been enduring telling us to think and act, to wise up and try to see where we are, and move on.