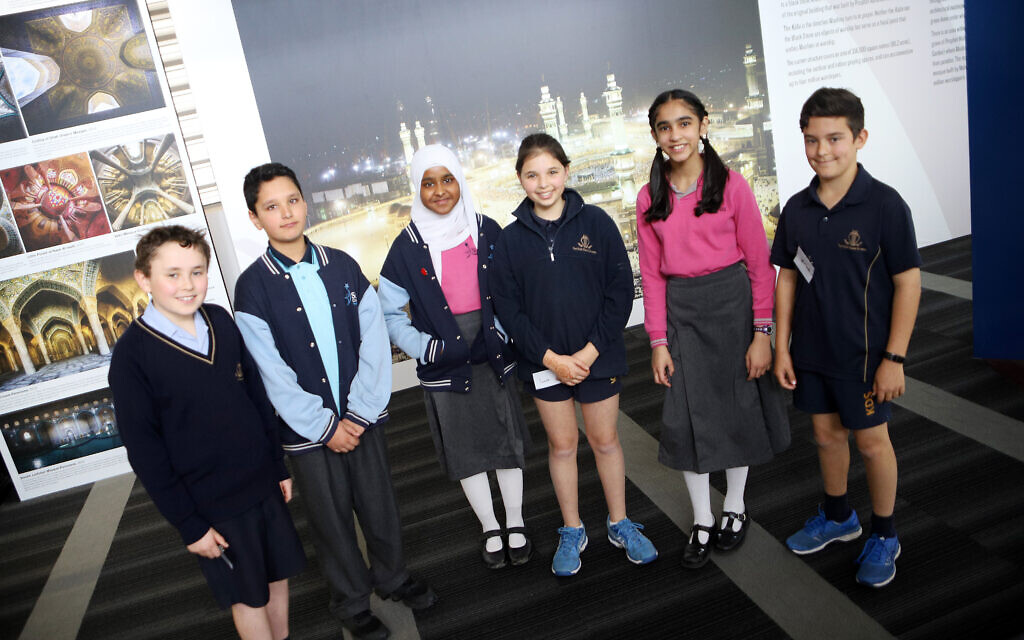 Students from The King David School and Sirius College participating in the Museums Together program. Photos: Peter Haskin

IN a world so often marked by divisions, an initiative which encourages togetherness between the next generation of Jewish and Muslim children recently took place.

The children trained as guides at their respective museums and acted as hosts when their counterparts visited, and participated in activities as one. 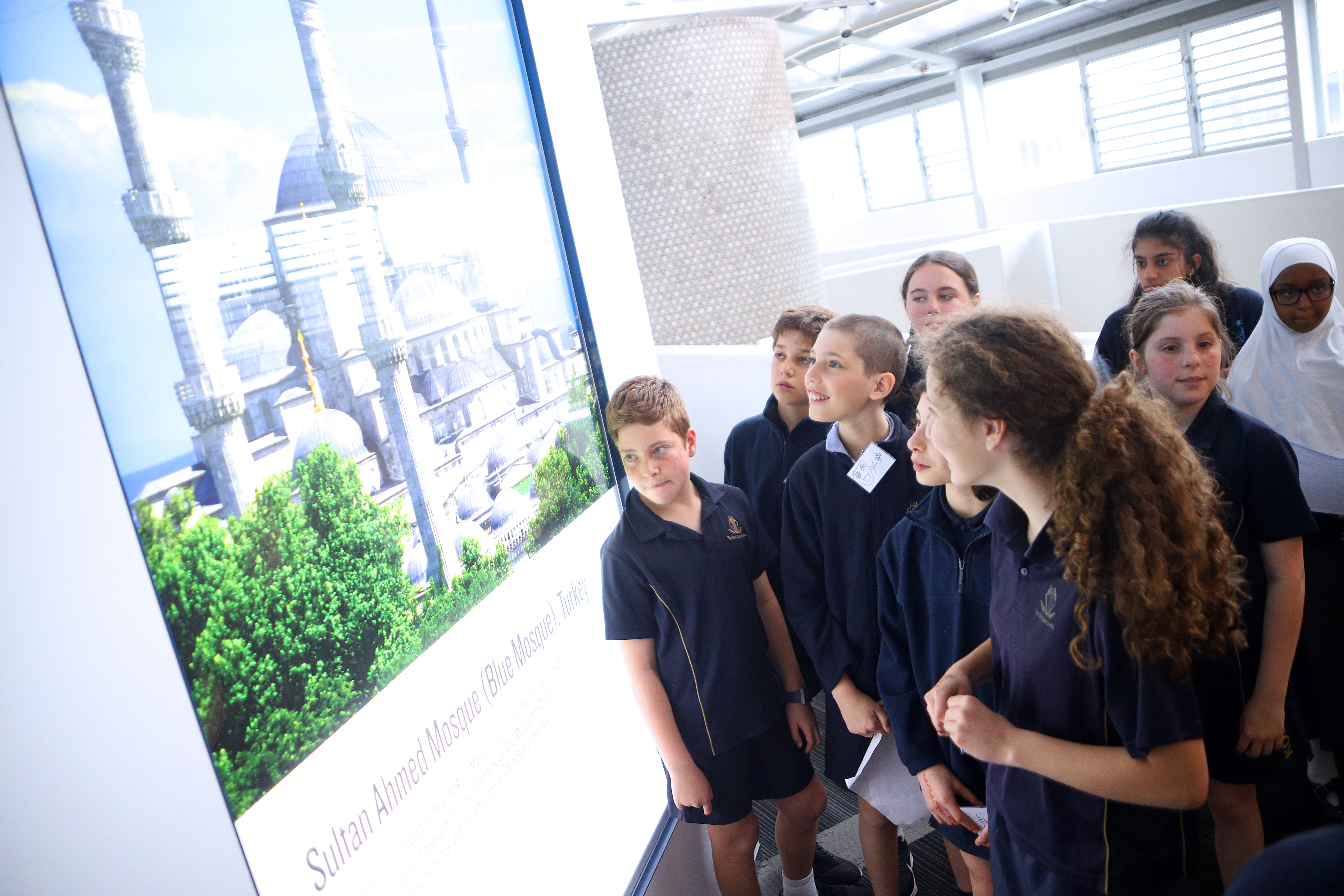 King David students at the Islamic Museum of Australia.

Two years ago, the JMA – with support of the IMA – received a three year grant from the Sidney Myer Fund in order to develop and deliver the grassroots program with students from Jewish and Islamic schools. And so, beginning in July, five sessions were held between the JMA and the IMA in conjunction with the Immigration Museum, Melbourne Playback Theatre Company and St Kilda Shule. 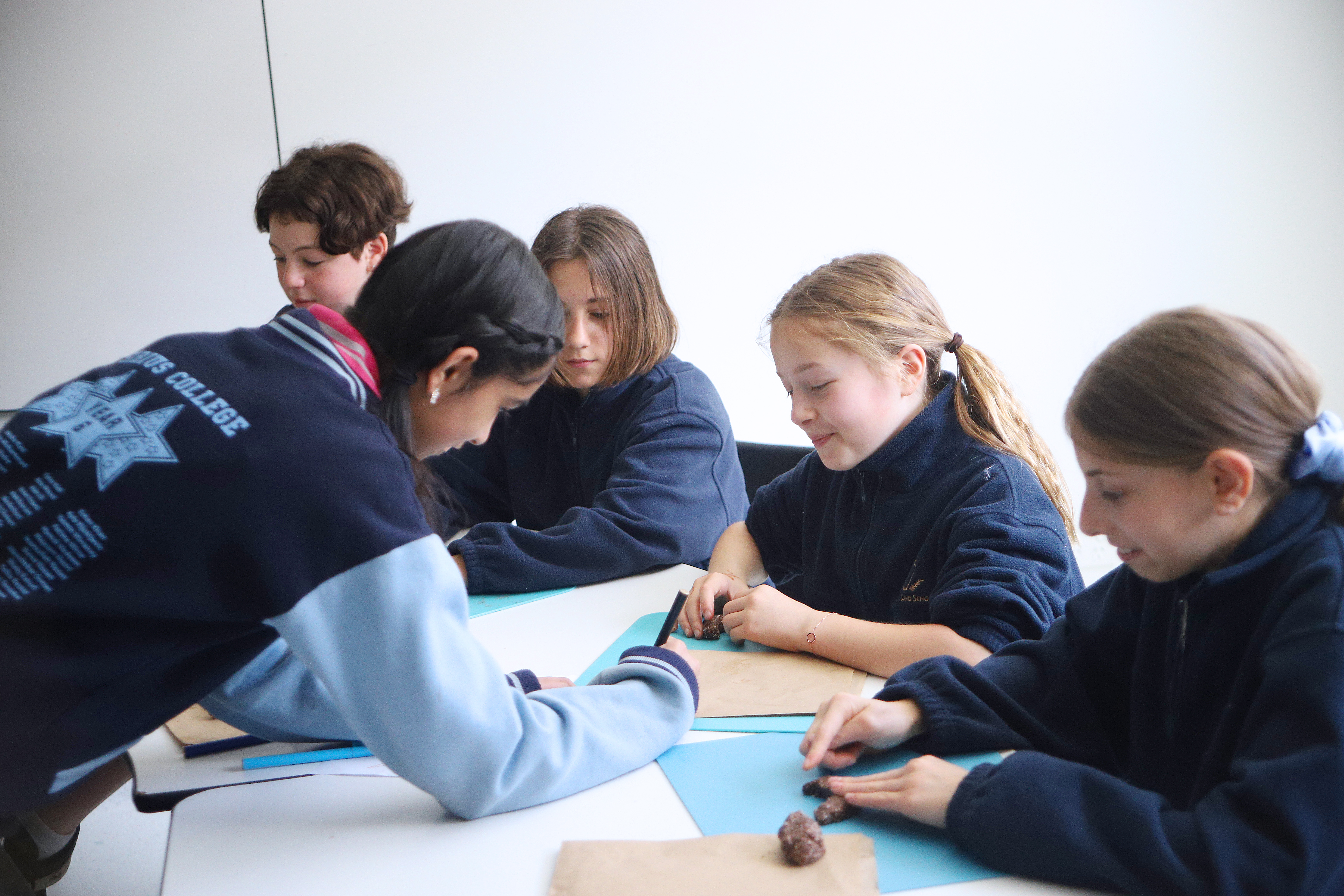 Students work together doing activities as part of the Museums Together program.

“It was such an honour and privilege to be involved in the Museums Together program. Seeing Jewish and Muslim students who would rarely have the opportunity to get to know people from each others backgrounds, coming together sharing stories, experiences, similarities and learning to respect difference was so rewarding,” reflected IMA director of education and community engagement, Sherene Hassan.

Together, the children baked challah and made traditional date crescent treats; learnt how to write their names in Hebrew and Arabic; and drew Magen Davids and 16 point stars of Islamic geometry.

But most importantly, they talked.

Here are some snapshots of what the experience meant to them. 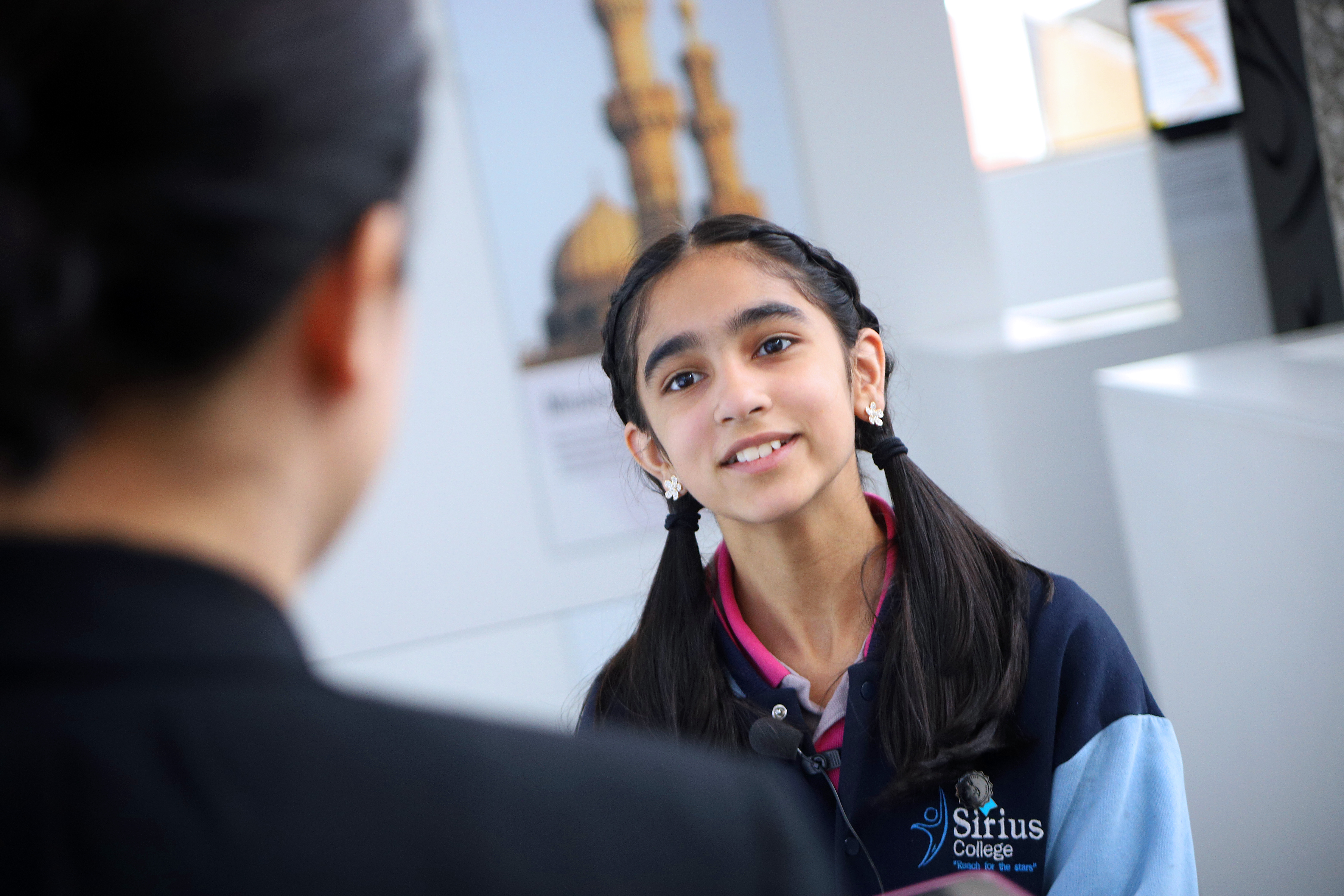 I WAS born in Pakistan and so were both of my parents. We came to Australia one year ago. I think this program was really great because you get to learn about other religions and you get to learn that your religion isn’t the only one.

My favourite part would be when I was doing activities with the Jewish people. I liked the blindfold activity, and I liked the cooking activity as well, when we made challah. I learnt about the kosher diet and what Jewish people eat. I was kind of surprised to see similarities between kosher and halal! I learnt that both of us have celebrations, and we both pray to God. I learnt about some important artefacts like the scrolls, and I learnt more about Chanukah. I also saw the differences between how we celebrate, so how Chanukah lasts for longer, and our celebrations last for a day, or like three days. Also, the difference between who we worship. 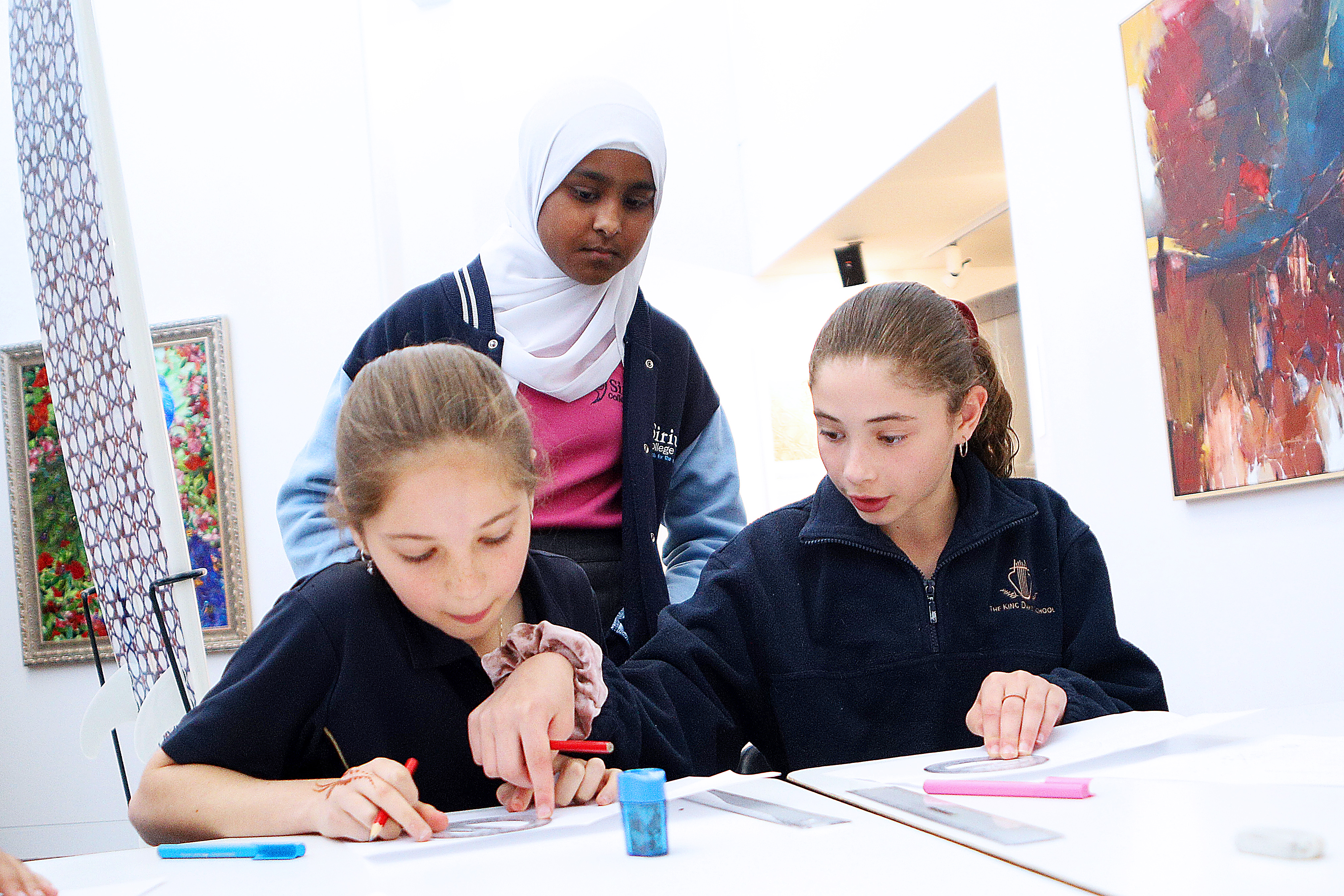 I think if I now met a Jewish person, I might feel more comfortable because I know more about them, their religion and what they worship, and I think I might even make friends with them.

The differences between our religion maybe might have once driven us apart, but now I think, now that we are a bit more modern we can start to become friends.

This experience has just reminded me of my religion a bit more, and it has reminded me that when I pray, I can think about other people who can also pray to their Gods. 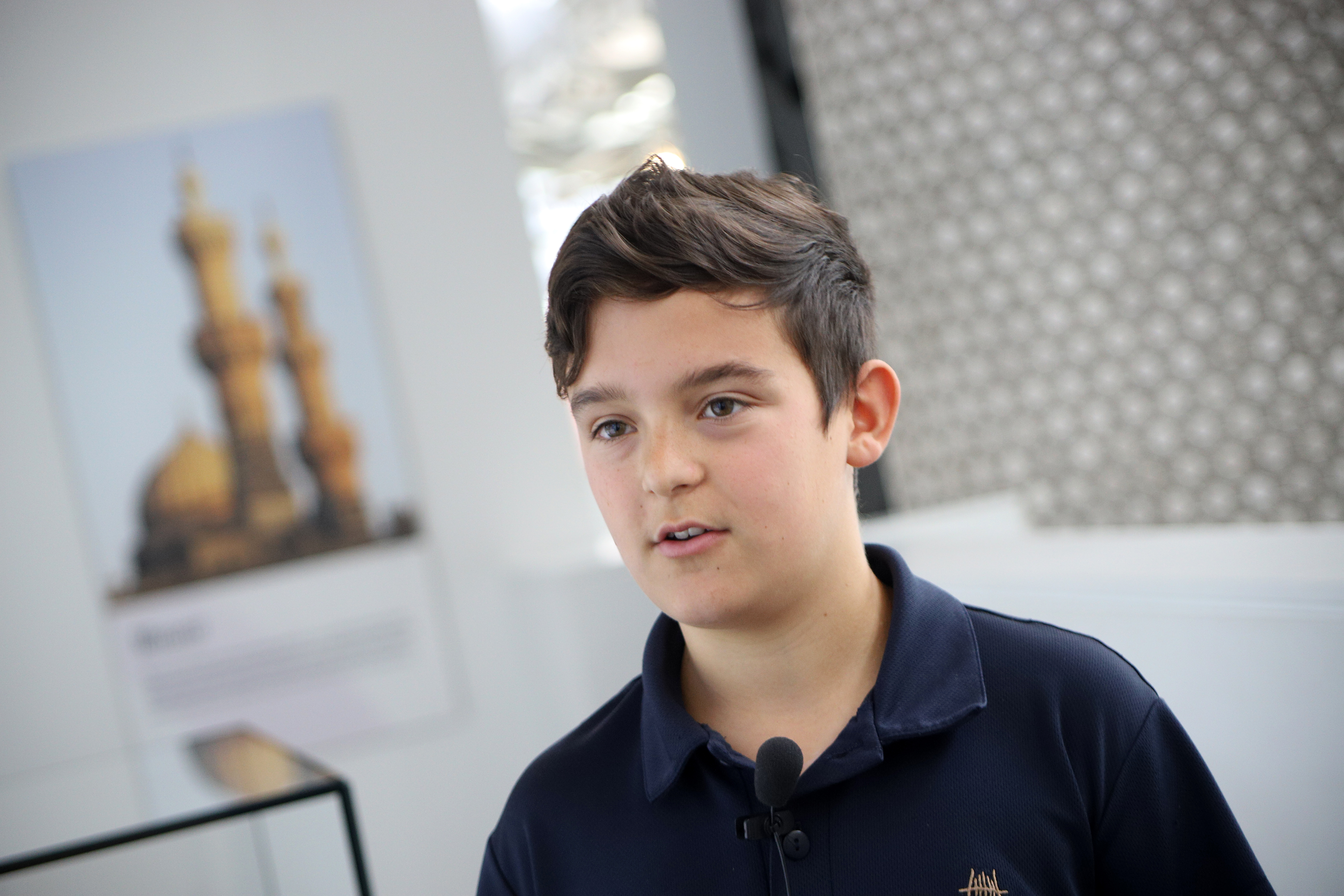 MY dad was born in Perth and my mum was born in Atlanta, Georgia. My dad moved to the US to study, and they met and moved to San Francisco, and that’s where I was born. Then we moved to Australia.

What I now know about Islam is there are a number of prophets that keep peace and spread peace, and there are five pillars of religion, and each one represents a certain thing that you have to do. One of them is prayer, and another one is pilgrimage, another is God, one is fasting and there is tzedakah. 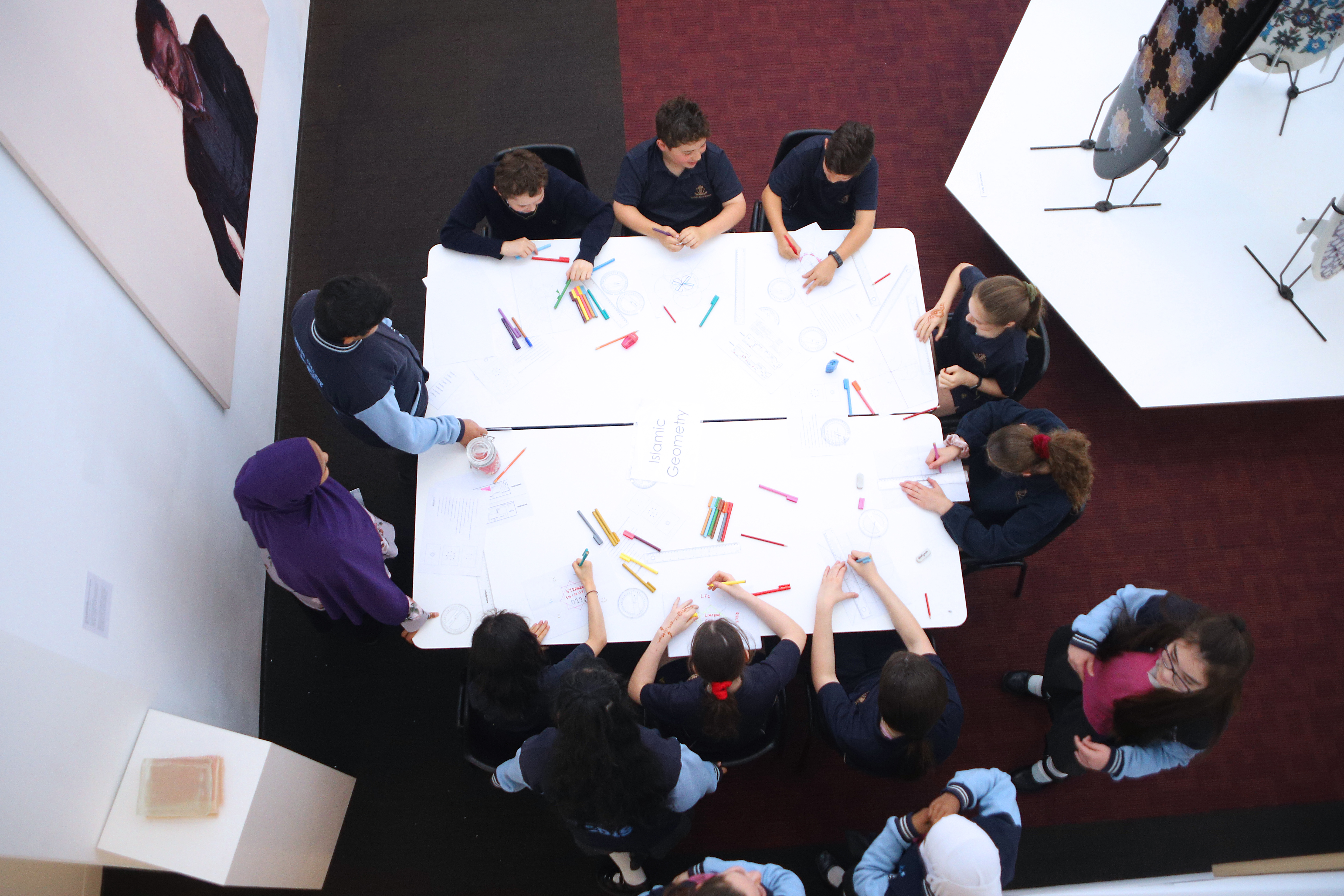 Nothing has shocked or surprised me about Islam. It is pretty much the same as Judaism, except a bit different here or there. Similarly, there is one God, and you have to do all the same stuff like pray and fast and give tzedakah.

I honestly have no idea why some Islamic people and Jewish people hate each other because they are two very similar religions, they live close to each other, and they could get along very well with each other if they tried. For the future, I doubt it will get better, I’m pretty sure it will get worse, but eventually I think they’re going to pull it together, and come together and figure it out.

As for my future, this program has inspired me for when I am doing Jewish studies and praying actually. It has inspired me to think about what I’m doing and kind of relate to the Islamic religion and Judaism. 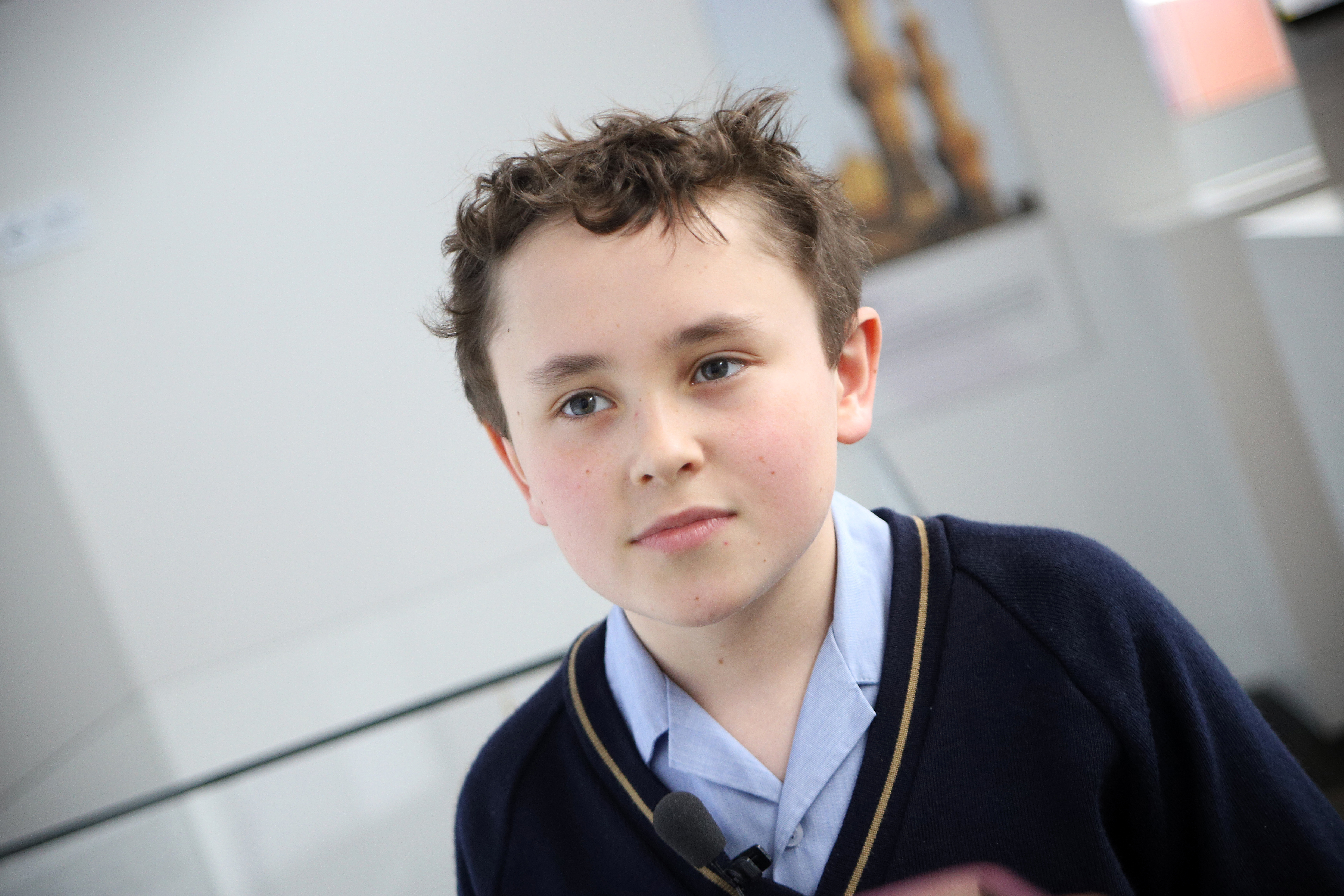 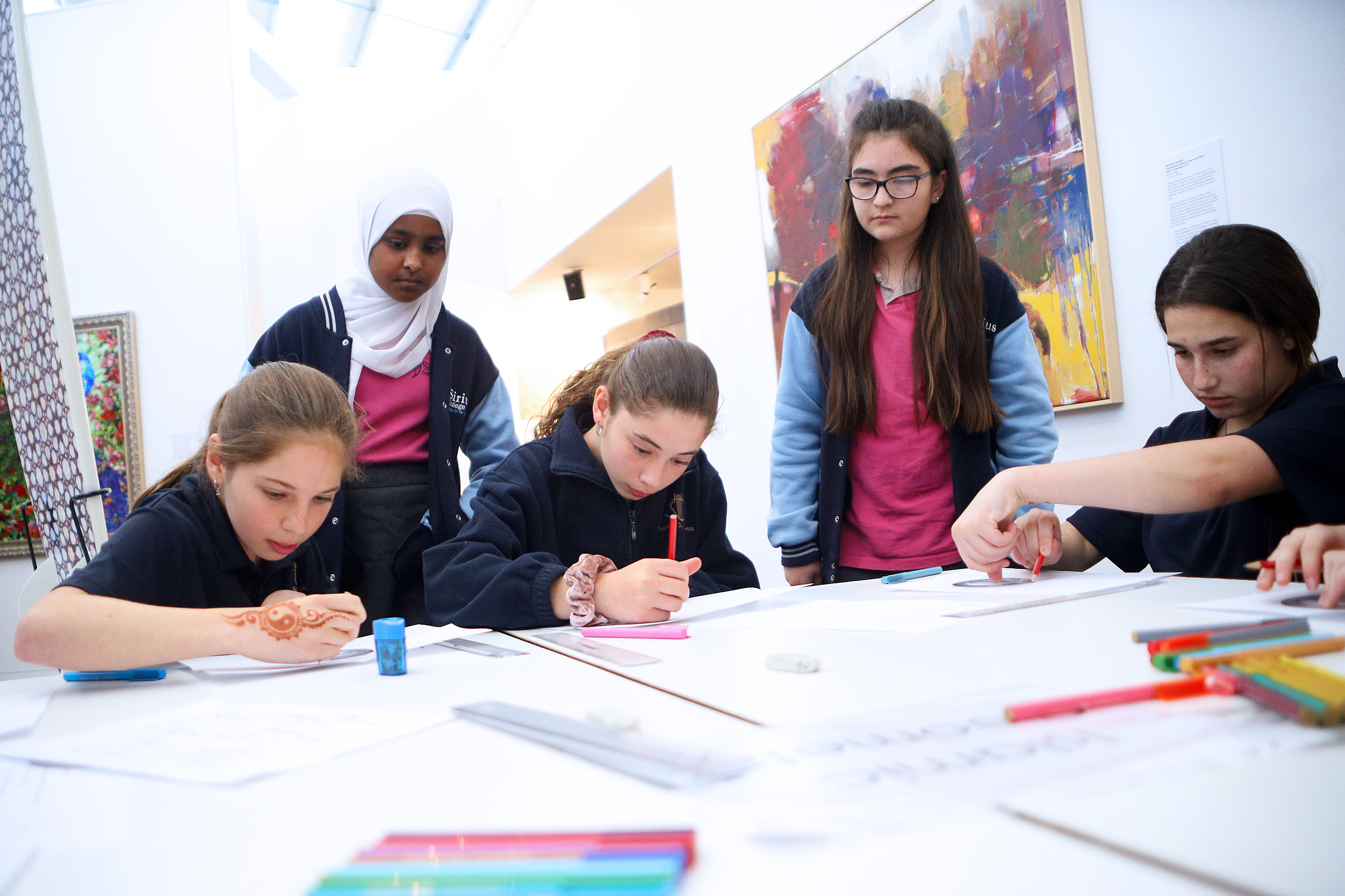 I really liked the Museums Together program. The first one, I was a bit unsure, but the second one, when we got to do the projects, I started to really like it. The second one was really interesting as I have known people who don’t know much about Judaism, but I haven’t really met anyone who is Islamic or Muslim. I also barely knew anything about Islam or Muslims or mosques or anything of their religion and culture, so it is really interesting. I learnt to write my name in Arabic. It was pretty tricky. It is a bit similar to Hebrew, but still very different.

What I learnt about Islam is there are five pillars. Charity, fasting, pilgrimage, only having one God (which is very similar to Judaism) and they also had the pillar of prayer – that one I always forget!

We learnt about the Islamic star, and how they have the eight prophets which are symbolised by the star, but in Judaism, the only thing that is similar to that is the King David star which represents him, but the Islamic star is different because instead of just being a symbol, it also shows all of the eight most important prophets. What really surprised me, is we don’t really have anything like that in Jewish culture.

Nazhah: 'I feel like in the future, Muslim & Jewish people won't have many issues because we're working together & talking to one another.' Our #MuseumsTogether program with the @IslamicMuseum featured in the @Aus_JewishNews today. Thank you, @RebeccaDavis___ & team. pic.twitter.com/AbleKbWXZv

I also saw a few major differences between Islam and Judaism. For example, when Jewish people fast, they only do it for about a day. But in Islam, there is a whole month called Ramadan, which is quite a lot. I don’t really know how you would fast for that long!

In the first session, I made a friend. We did an activity where we had a list, and we ticked what we liked. We had a lot of things in common. If I met a Muslim person now, I would feel comfortable talking to them and making friends with them. 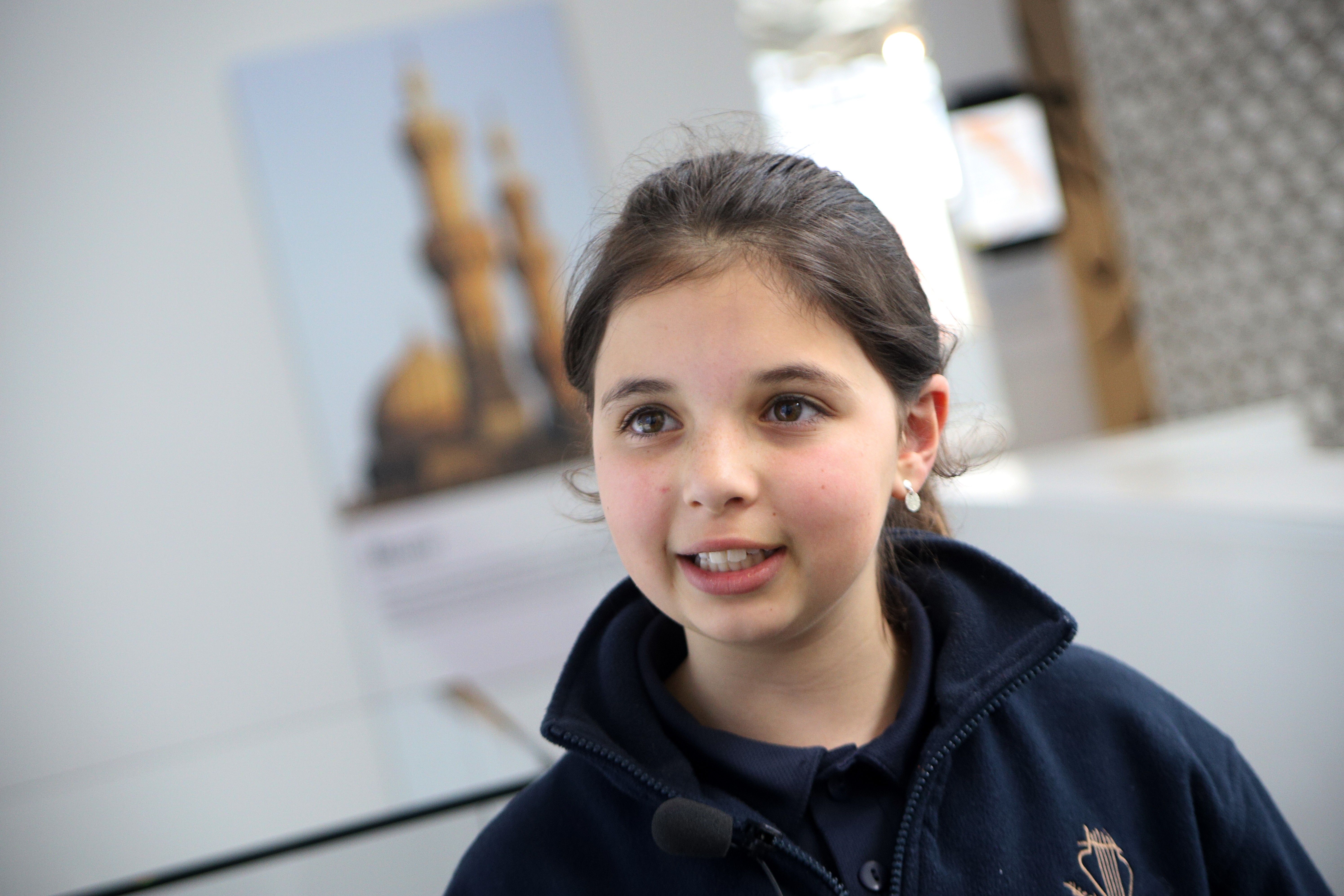 MY parents were both born in Australia after my grandparents came from Germany. In this program, I really liked getting to know other people’s religions and trying to get to talk to them, and seeing what they’re like. I enjoyed getting to know them more, and learning about their culture – and their food!

I learnt about all the mosques and how they work and what things are needed for it to be a mosque.

What has surprised me is there are quite a few similarities with Judaism as well. Like, we both have one God, we both have places of worship, and very similar. But how we pray, how we celebrate our religions; these are very different because we are different cultures.

I feel like there have been some barriers in the past between Jews and Muslims because we do have different ways, and we believe in different things and maybe we want our side to win for that belief.

This program has taught me that we are not very different. We are both kind of similar, and we can both have a conversation together. I now recognise that we can be together and it isn’t about one side beating the other in war or whatever conflict there is. 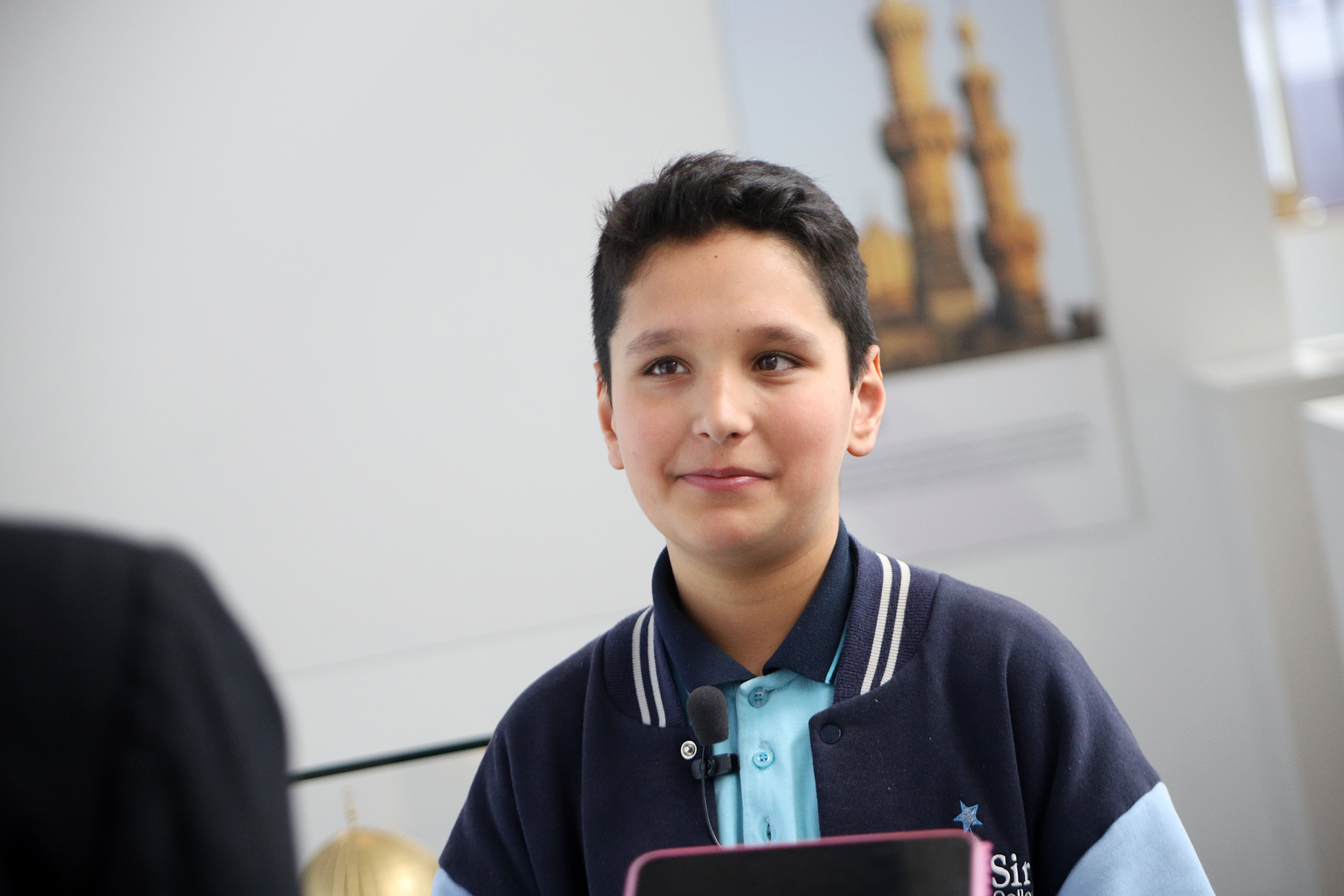 MY parents were born in Afghanistan, and I was born here.

My favourite part was going to the Jewish Museum and learning about their religion. Nothing has really surprised me. But, we have the same prophet – Moses – only we call him Musa.

To me, there really are no big differences between us. 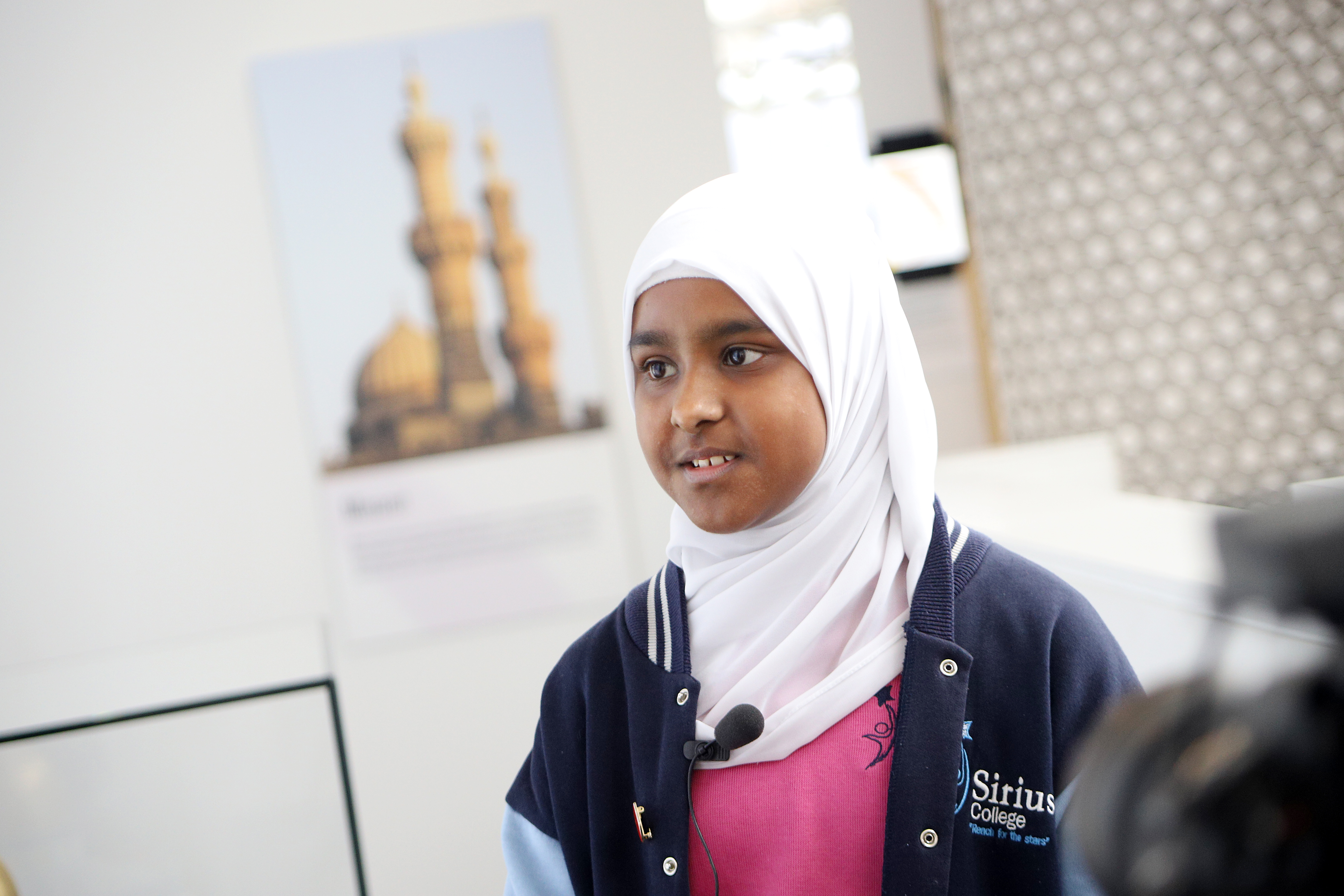 MY family background is Sri Lankan. I think this program has been good because different religions come together and we get to talk together and learn about each other.

My favourite part has been learning about Jewish culture, because I didn’t know much about it, like, I didn’t know they had the six-point star and we have the eight-point star. There are lots of similarities between the two religions, like we both have different types of books.

Now knowing what Jewish people believe, I would feel more comfortable if I met a Jewish person in the future.

I feel like in the future, Muslim people and Jewish people won’t have many issues because we’re working together and talking to one another.