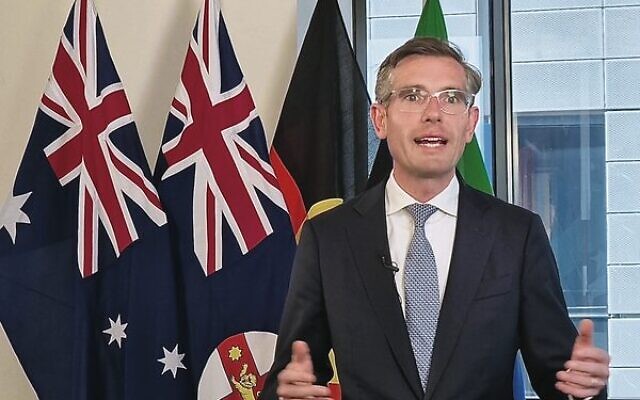 Premier Dominic Perrottet made the announcement on Tuesday afternoon, following the federal government’s adoption of the definition in October.

“To fight something, you need to be able to identify it, to be able to describe it, to name it. A definition is an essential tool.

“It’s a tool which empowers all those who fight this fight.”

Acknowledging that antisemitism is one of the oldest forms of racism, the premier noted that “sadly, no place in the world is immune from its scourge”.

“Yet there is no place for it anywhere in the world, and especially not in NSW. It goes against everything our proud, strong, multicultural state stands for,” he said.

“We hear the Jewish community, and today we stand with them in the fight against antisemitism.

“This definition will make a difference. It will help people call out antisemitism wherever it hides – on social media, on educational campuses, on the streets of NSW.

“Embracing this definition is an important step to ensure our peaceful, vibrant, multicultural society remains just that.”

Perrottet said the recent festival of Chanukah “reminds us of the triumph of light over darkness”.

“It’s a time of joy, but it’s so much more. It’s also a reminder of the dangers of racism, bigotry and hate speech,” he said.

The Premier thanked “the important work of the Jewish community”, including the NSW Jewish Board of Deputies (JBOD) and other community leaders.

“I’d also like to acknowledge Minister Natalie Ward and Scott Farlow MLC, who have not only been tireless advocates for this cause, but fierce opponents of discrimination in any form,” he added.

The Premier’s announcement was also made available in Hebrew on Friday.

Posted by The Australian Jewish News on Wednesday, October 27, 2021

JBOD applauded Perrottet for announcing that the NSW government will embrace the definition.

It comes after the state communal roof body unanimously endorsed the definition at its November plenum in what president Lesli Berger said was “a clear sign that the Jewish community is broadly united behind the definition and would strongly welcome its application across NSW”.

“We would like to thank the NSW Premier for championing this cause and are proud to see that the fight against antisemitism is a priority for the NSW government, particularly in light of recent increases in antisemitic incidents,” Berger said this week.

“Identifying and describing antisemitism is the first step in combatting antisemitic behaviour. The IHRA definition does just that – it provides clear examples of antisemitism to educate and guide community action against it.”

Posted by The Australian Jewish News on Thursday, November 18, 2021

JBOD CEO Darren Bark said, “Combatting antisemitism is not just the responsibility of the Jewish community, it takes leadership from every public figure, which is why we are so grateful to the Premier and the NSW Government for leading the way amongst state governments.

“Every tool that is available to stamp out the scourge of hate speech and racism should be used before speech manifests into something more dangerous.”

Meanwhile, responding to Perrottet’s announcement, a spokesperson for the Victorian government told The AJN, “We are currently consulting with the community on the adoption of the IHRA definition of antisemitism.”

Stressing, “Antisemitism – or any act with the intention of spreading fear or hate – has no place in Victoria,” the spokesperson added, “We’re stamping out hateful behaviour, including legislating a ban on the public display of Nazi hate symbols.

“The symbol is playing a role in a rise in neo-Nazi activity and in inciting hate behaviour – including some of the disgraceful and deeply unacceptable and traumatising behaviour we’ve seen in recent months.

“Tackling antisemitism head-on is vital to building a stronger, fairer society and this Government stands prepared to join with our proud and strong Jewish community to achieve a Victoria that is free from the scourge of antisemitism.”

Posted by The Australian Jewish News on Wednesday, November 17, 2021

As part of consultations on the adoption of the definition, Victorian Minister for Multicultural Affairs Ros Spence wrote to stakeholders in November asking for input by this Friday.

The AJN understands a determination will be made in early 2022.

Addressing the Zionism Victoria annual assembly last month, State Opposition Leader Matthew Guy announced that the Victorian Liberals will adopt the definition should they be successful at the next election.

“Antisemitism, particularly on our university campuses, has increased this year and the definition plays an important role in helping communities, institutions and individuals identify and call out antisemitism,” she said.

Zionist Federation of Australia president Jeremy Leibler said, “The importance of the IHRA definition is being recognised around Australia and around the world.

“Antisemitism has no place in Australia, and, as Premier Perrottet says, in order to fight it, we have to define it. We thank the NSW Government for this stand and encourage other Australian state governments to do the same.”

“NSW may be the first state to embrace the IHRA definition, but we are confident that others will soon follow its excellent lead. We also look forward to seeing the definition adopted by a range of institutions across Australia.”