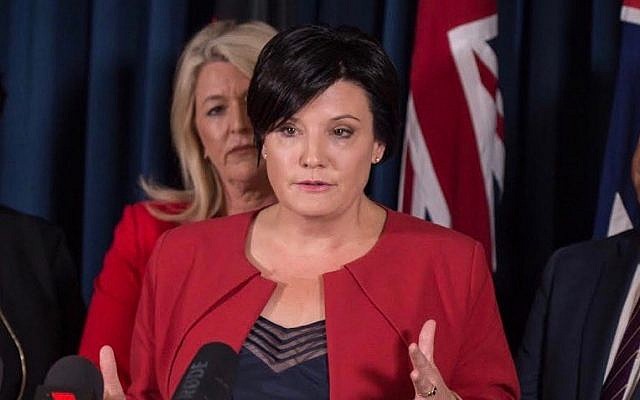 NEWLY elected NSW Labor leader Jodi McKay has acknowledged the Jewish community’s “enormous contribution” to the state and says she is looking forward to meeting the communal leadership.

Strathfield MP McKay, who defeated Kogarah MP Chris Minns in a leadership ballot last weekend, has also taken on the portfolio of shadow minister for multiculturalism, part of a pledge to “put multiculturalism at the centre of my administration”.

In comments provided exclusively to The AJN, she acknowledged “the contribution of the NSW Jewish community to building a tolerant and cohesive multicultural and multi-faith society” and said she would meet with the NSW Jewish Board of Deputies (JBOD) as soon as she settled into her new position and “among the matters of consideration will be communal security”.

“I acknowledge the important contribution the Jewish community has made to NSW and Australia – over the last 200 years – at all levels from community groups, local government, the military to the office of governor-general of Australia,” she said.

“It is undeniable fact that the Jewish community has made an enormous contribution to political, economic, social and cultural life in NSW; that contribution continues today.

“The Jewish community has been at the forefront of the fight to combat intolerance and discrimination from LGBTIQ communities to anti-racial vilification laws as well as awareness of the Holocaust.”

Congratulating McKay, JBOD president Lesli Berger said, “The Jewish community has enjoyed a long and constructive relationship with NSW Labor over many decades and we look forward to continuing that relationship with Ms McKay.

“We appreciate her warm overture and her recognition of the contribution of the Board of Deputies to promoting social harmony and to legislative reform.

“Her acknowledgement of the Jewish community’s role in this space is greatly appreciated and we look forward to meeting with her and her leadership team in due course.”

One of the beneficiaries of McKay’s ascension is NSW Parliamentary Friends of Israel deputy chair Walt Secord, who has been promoted to shadow treasurer. Secord said he was “excited by the promotion”.