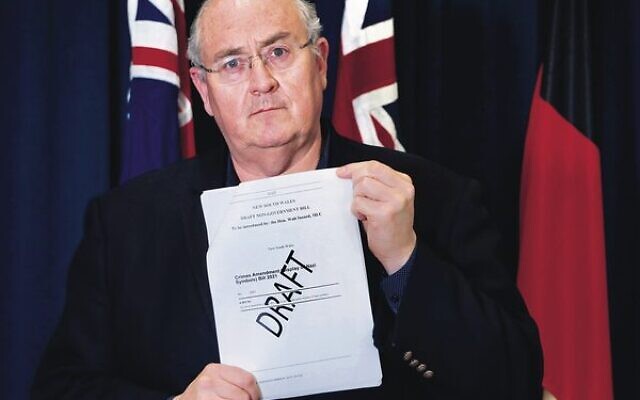 NSW Labor has unanimously approved a draft bill for public consultation to ban the Nazi flag and swastika in NSW.

It follows the announcement by Victoria’s Labor government earlier this month that it will become the first Australian jurisdiction to legislate a ban on the public display of Nazi symbols.

The NSW draft legislation was put forward by shadow police minister Walt Secord and shadow minister for multiculturalism Steve Kamper and approved by a full Labor caucus on September 7.

Under the proposal, it would become an offence to display symbols of Nazi ideology, including the Nazi swastika and Nazi flag. Certain uses, including educational and in connection with Hinduism, Buddhism and Jainism, would be exempt.

Calling the Nazi flag “deeply offensive”, Secord said displaying the symbols of an enemy that Australians died to defeat “is an affront to them, to survivors of the Holocaust and to all of their collective descendants”.

Kamper added, “The Nazi flag is an emblem of genocide and racism. The decision to fly a Nazi flag is a simple expression of hatred.”

Asked if the government would support the bill, NSW Attorney-General Mark Speakman said, “We will carefully consider any private member’s bill that is shared with the Government and will formally respond in due course.

“Racism and bigotry have no place in a civil society. Displays of the Nazi flag and swastika are abhorrent and deeply offensive to the Jewish community and the brave men and women who fought against the hatred and tyranny that these symbols represented,” he said.

“We welcome any move to counter the surge of violent extremist ideology occurring both globally and here in Australia. Any measures should be targeted and effective,” he said.

“The banning of the Nazi swastika should be part of a broader strategy which includes educational programs against all forms of bigotry.”

Meanwhile, Secord has written to Education Minister Sarah Mitchell after the NSW Education Department denied a second request to release information regarding the investigation into an employee who posted under a photo of Adolph Hitler on Facebook, “It’s a shame he didn’t finish the job.”

“Why is the Education Department shielding an employee who posted antisemitic pro-Hitler comments? It is time for the Education Minister Sarah Mitchell to take a principled stand and release the material,” Secord said.

Should the minister continue to refuse to release the information, Secord said he would take the matter to the Information Commissioner and/or the NSW Civil and Administrative Tribunal.