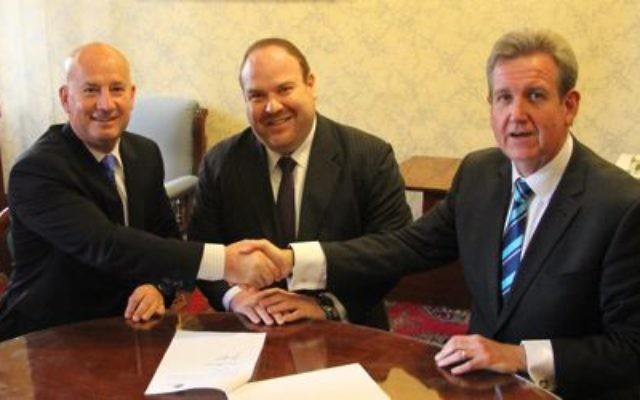 PREMIER Barry O’Farrell and Opposition Leader John Robertson have cast party politics to the side, when they signed the London Declaration on Combating Anti-Semitism.

The historic ceremony took place on Tuesday at Parliament House, with NSW Jewish Board of Deputies (JBOD) president Yair Miller and CEO Vic Alhadeff in attendance.

O’Farrell said it was up to political leaders “to do everything they can” to stamp out anti-Semitism.

“It worries me that decades have passed since the end of World War II and yet there is still a need to speak out about abhorrent anti-Semitic activity,” he said.

“This is an issue above politics – which is why I am delighted it has bipartisan support.”

Robertson said it was an honour to sign the declaration “in a spirit of bipartisanship”.

“Leaders of political parties have a duty to speak out against anti-Semitism – and we speak stronger when it is with one voice,” he said.

“The horror of the Holocaust teaches us that evil and bigotry can take hold unless they are vigorously opposed and challenged.

“Hatred will always be defeated by reason, enlightenment – and the hearts of decent people.”

In Canberra, all 105 federal Coalition parliamentarians have now signed the declaration, with both sides of politics in Victoria also set to commit to the global initiative in the coming days.

Victorian Premier Dennis Napthine and Opposition Leader Daniel Andrews are expected to sign next week, with Jewish Member for Caulfield David Southwick having put pen to paper on Tuesday.

Southwick said the fight against anti-Semitism was of particular importance in Victoria.

“The fight against anti-Semitism is a global issue and is particularly important in Victoria due to our state’s place as a centre of the Jewish Diaspora. This declaration raises awareness of the issue of anti-Semitism and demonstrates that it cannot be tolerated,” he said.

“Anti Semitism – indeed all hate speech and discrimination targeted at any group – is not to be tolerated in civil society. That’s why Victorian Labor supports the signing of the London Declaration,” Andrews told The AJN.