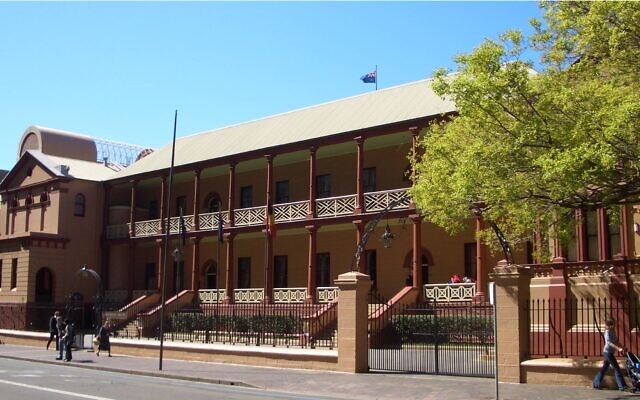 THE NSW Legislative Council has become the first house of parliament in Australia to endorse the International Holocaust Remembrance Alliance (IHRA) working definition of antisemitism.

A motion moved by Christian Democratic Party leader Rev Fred Nile to to adopt the definition “together with its contemporary examples” was carried on Wednesday night.

But while the NSW Jewish Board of Deputies (JBD) has commended the Legislative Council on adopting the resolution, it has taken aim at a Labor member who during the debate argued that “Israel has made Jewish people more unsafe”.

“Adopting the definition will send a powerful message that we will combat antisemitism and adapt our tactics accordingly,” Rev Nile said when he moved the motion, adding it was time for the Legislative Council to give it its full support.

JBD CEO Darren Bark called it a “historic decision”,  following the NSW government’s announcement in December that it will also embrace the definition.

“The IHRA definition provides clear examples of antisemitism to educate and guide community action against it, and as Premier Dominic Perrottet said last year, to fight something, you need to be able to identify it. A definition is an essential tool to do just that,” he said.

“We commend and thank each and every MP who spoke in support of the motion, and Reverend Fred Nile MLC for bringing it forward. With antisemitism on the rise around the world, and the fact NSW experienced the highest reported number of antisemitic incidents in Australia last year, the NSW Parliament’s adoption of the IHRA definition is more important now than ever.”

A number of government members, including Shayne Mallard, Scott Farlow and Natalie Ward,” spoke in favour of adopting the definition, as did Labor’s Daniel Mookhey and Walt Secord.

A number of Greens spoke against it as did Labor’s Shaoquett Moselmane and deputy opposition whip Anthony D’Adam.

“There is a core problem with not so much the actual definition but with the contemporary examples about the way it deals with the State of Israel,” D’Adam said.

“I accept that Israel was created out of an aspiration for Jewish people to be safe. That is fair enough after the horrors of the Holocaust. Absolutely. But Jewish people should be safe everywhere in the world.

“In fact, I would argue that Israel has made Jewish people more unsafe.”

On behalf of the JBD, Bark condemned D’Adam’s “dangerous and misguided comments”.

“Mr D’Adam’s comments, which take a page out of former UK Labour leader Jeremy Corbyn’s anti-Israel playbook, are incredibly ignorant, offensive and dissociated from the truth,” he said.

“Israel was founded from the ashes of the Holocaust as a homeland for Jews who faced two millennia of persecution. To say that Israel makes Jews more unsafe is to ignore and slight the history of persecution that Jews have faced and the murder of six million Jews in Europe – who, if Israel had existed, would likely have lived.

“Mr D’Adam is so fundamentally wrong and insulting with his remarks we demand that they be withdrawn.”

“With this adoption, AIJAC urges government and non-government institutions and organisations in NSW to consider how they can implement this definition in their training, processes or policies to combat antisemitism,” AIJAC executive director Colin Rubenstein said.

“AIJAC regrets that there are still those, even in parliament, who believe they know better than the group of scholars and academics from around the world who dedicated years to developing a consensus working definition of antisemitism. It is time those naysayers engage with their Jewish constituents and commit to tackling antisemitism, whatever its origins.

Dr. Rubenstein added, “AIJAC also commends the NSW Jewish Board of Deputies for their persistent, effective efforts in achieving this welcome outcome.”