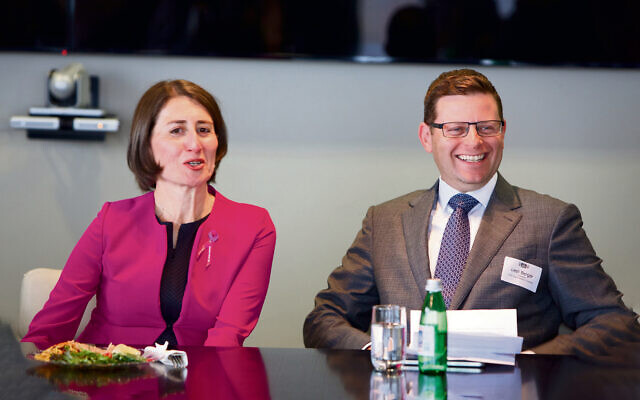 THE NSW Jewish Board of Deputies (JBOD) has paid tribute to outgoing NSW Premier Gladys Berejiklian after she announced her resignation on Friday afternoon.

The decision comes after ICAC announced it is investigating whether Berejiklian engaged in conduct that constituted a breach of public trust.

“The Jewish community has enjoyed a long and warm relationship with Gladys Berejiklian throughout her many years in Parliament – particularly these last 4 years as Premier of NSW,” JBOD CEO Darren Bark told The AJN on Friday.

“As the peak body of the Jewish community in this state, the NSW Jewish Board of Deputies would like to acknowledge her incredible leadership throughout her time as Premier, steering our state through the COVID-19 pandemic, horrendous bushfires, floods and other biblical plagues.”

He added, “We react with sadness and disappointment at her resignation and thank her for her tremendous friendship to the Jewish community of NSW and for maintaining an open door to hear our issues and concerns.

“There has been no stronger friend for the Jewish community throughout her time as Premier, as a minister and through her entire period in Parliament.”

In a statement on Friday afternoon, Berejiklian said, “I have had to make an extremely difficult decision overnight, but one which I feel obliged to do because of the love and respect that I have for the people of New South Wales and the high regard which I have for the office of Premier.”

Stating, “I want to be very clear, in all the decisions I have ever made as a Minister or as Premier for New South Wales, my first consideration has always been the well-being and welfare of the people of this state,” she said, “I have always acted with the highest level of integrity.”

Noting, “Standing aside is not an option for me,” Berejiklian added, “I cannot predict how long it will take the ICAC to complete this investigation, let alone deliver a report, in circumstances where I was first called to give evidence at a public hearing nearly 12 months ago.

“Therefore, it pains me to announce that I have no option but to resign the office of Premier. My resignation will take effect as soon as the New South Wales liberal party can elect a new Parliamentary leader.”