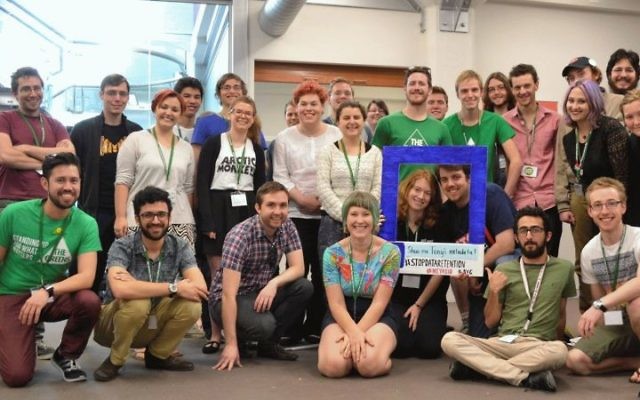 The NSW Young Greens have refused to speak at an AUJS event.

THE NSW Young Greens claim they were not discriminating against Jewish students by refusing to speak at an Australasian Union of Jewish Students (AUJS) NSW Political Conference last week.

In a statement, AUJS claimed that the NSW Young Greens’ official policy was to “boycott Jewish students” and said that it was “angered and disappointed” by that stance.

“The fact that the NSW Young Greens have chosen to boycott an opportunity to engage with Jewish students on account of their mistaken beliefs about AUJS’ attitudes towards foreign policy speaks volumes of their problematic attitudes towards the Jewish community,” AUJS said.

“To reduce Australian Jews entirely to their political perspectives on a conflict occurring overseas, and to erroneously pigeonhole the entire Jewish student community as ‘support[ing] the occupation of Palestine’ demonstrates the deep, systematic prejudices which pervade the NSW Young Greens.”

AUJS went on to say that the decision makes a “mockery of the Greens’ recent support for diversity and multiculturalism in the context of the 18C debate” and that the Greens decision is “in line with the far-left trend where hatred for Israel is so strong that it can result in the anti-Semitic effect where the Jewish community is boycotted for the supposed crime of self-defining its cultural, ethnic and national identity.”

In response to AUJS’ claim that it was boycotted, the NSW Young Greens restated its support for Palestine and its citizens and said that it didn’t attend the event because of AUJS’ politics, and not because it was a Jewish organisation.

“We broadly condemn any kind of denial or justification of the ongoing violation of the rights of Palestinians.

“AUJS has a history of campaigning in support of the Israeli military bombing of Gaza through their “What Would You Do” campaign.

Australian Young Labor posted last week that no organisation, especially political parties, should support boycotting sections of the community due to their race, religious beliefs or ethnicity.

NSW Young Liberals also supported AUJS. “While the Greens orchestrate a boycott, our president Alex Dore will be speaking at the AUJS Young Leaders Networking Night tomorrow,” the group posted.