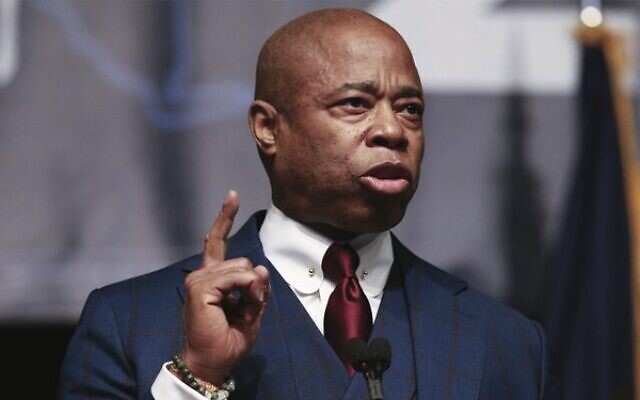 Adams called the meeting following a spate of incidents as part of his administration’s effort to take a tough stance against anti-Jewish hate crimes.

Rabbi David Niederman, the head of the United Jewish Organisations of Williamsburg and North Brooklyn, who attended the meeting, said, “He came out very, very strongly that he’s not going to tolerate this.”

About 40 Jewish community leaders from different areas of the city attended, along with top police officials and the head of the city’s education department.

“Adams said he is going to ensure that the department is not going to be shy to call something a hate crime if it is,” said Niederman.

“They will investigate very thoroughly to ensure that this stuff does not happen and they’ll take all necessary steps for enforcement and prosecution.”

The New York Police Department has consistently investigated attacks on Jews as hate crimes since Adams took office at the beginning of the year. Some local politicians have criticised the legal system for quickly letting the suspects free on bail.

Alexander Rosemberg, the Anti-Defamation League’s deputy regional director for the New York and New Jersey region, said Adams at the meeting had “conveyed to the Jewish community that he’s aware of the situation we’re going through” and was trying to put the correct measures in place.

Adams is dealing with a host of problems, but his “heart is in the right place” when it comes to the antisemitism issue, said Rosemberg.

He said the meeting’s attendees felt grateful to Adams for calling the meeting and there was a feeling of collaboration in the room.

“Everybody wanted to bring their ideas forward, to say ‘this is what we’re willing to do for the city’,” said Rosemberg.

One possible measure under discussion is to make reporting crime on Shabbat easier, since many of the assaults happen during Shabbat when observant Jews do not carry communication devices.

The education department said at the meeting it will work on countering antisemitism and hate crimes with educational programs.

“He has education as a preventive measure front and centre,” Rosemberg said of Adams.

Adams forged strong ties to New York’s Jewish communities as Brooklyn’s borough president before becoming mayor and has forcefully condemned antisemitic incidents since taking office. He had a long career with the New York Police Department before entering politics.

He has appointed Orthodox Jews to his transition team and to his administration. Last month, he appointed Joel Eisdorfer, a Chassidic community leader from Borough Park, as a senior adviser, to wide support from Jewish leaders.

There has been a slew of antisemitic attacks against New York Jews in recent weeks, mostly physical assaults against visibly Jewish individuals and hateful graffiti. Most recently, vandals sprayed “F**k Jews” three times on a newly-opened Israeli restaurant on the Upper West Side of Manhattan.

Last month saw a number of assaults against Jews. On one Shabbat, an attacker hit a Jewish teenager in the face, vandals scrawled antisemitic graffiti on a dental office and an assailant smashed the windshield of a Jewish school bus with children on board.

New York police said they were investigating three alleged antisemitic attacks in Brooklyn over a Shabbat last month. Two were physical assaults and one was antisemitic graffiti. Other recent incidents in the New York region in recent weeks have included numerous acts of vandalism such as spray painting swastikas, verbal abuse, blasting Jews with snow, spitting on children and physical violence.

Hate crimes usually do not lead to arrests in New York. The 198 confirmed hate crimes against Jews in New York last year only resulted in 58 arrests.

Rosemberg claimed many incidents likely go unreported and called on the public to report on any suspected hate crime.