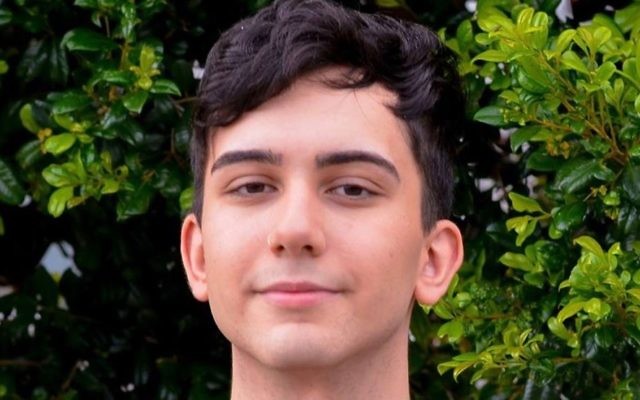 THE Australian Greens have slammed as “unacceptable” a NSW Greens candidate using their official campaign Facebook page to promote BDS, despite it not being party policy.

Connor Parissis, who is contesting Linda Burney’s Sydney metropolitan seat of Barton, shared a post from BDS Australia on the “Connor Parissis – Greens for Barton” Facebook page on Wednesday.

It came just days after the Greens, responding to an Executive Council of Australian Jewry (ECAJ) election questionnaire, stated “Boycotts, Divestment and Sanctions is not Australian Greens policy”. 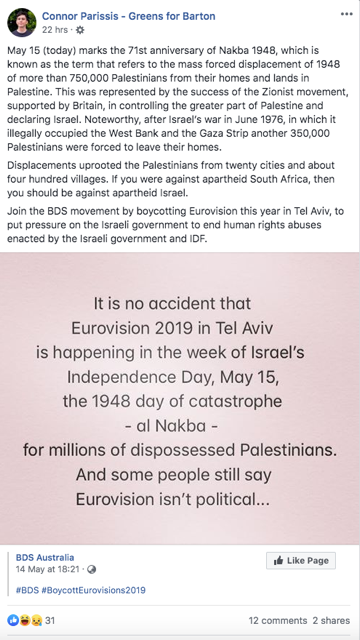 “While the decision to endorse and stand beside candidates is a matter for the Greens NSW, it is the view of the Australian Greens that Connor Parissis’ behaviour on social media throughout the campaign, including by using their position as a candidate to endorse policies contrary to the Party’s platform, is unacceptable.

“All candidates are expected to support Australian Greens policy and uphold reasonable standards of conduct.”

Greens candidate for Macnamara Steph Hodgins-May told The AJN on Thursday, “It’s incredibly disappointing to see a Greens candidate in another state using their official platform as a federal candidate to promote a boycott of Israel which is not, and has never been Australian Greens policy.”

Sharing the BDS Australia post, Parissis wrote, “May 15 (today) marks the 71st anniversary of Nakba 1948 … the mass forced displacement of 1948 of more than 750,000 Palestinians from their homes and lands in Palestine.

“Noteworthy, after Israel’s war in June 1976 (sic), in which it illegally occupied the West Bank and the Gaza Strip another 350,000 Palestinians were forced to leave their homes.

The post from BDS Australia suggests it is “no accident that Eurovision 2019 in Tel Aviv in happening in the week of Israel’s Independence Day”, despite the song contest always being held in mid-May each year.

ECAJ co-CEO Alex Ryvchin told The AJN, “The Greens have explicitly told us that they do not support BDS. And they have good reason not to.

“Not only is it politically toxic, but a campaign steeped in a racist denial of Jewish peoplehood and national rights whose rhetoric is indistinguishable from classic antisemitism, makes a mockery of the social justice and anti-racism branding of the Party.

“Yet the regularity with which the Party elevates voices who support BDS suggests they are being disingenuous with the electorate, officially disavowing BDS on the one hand while giving it prominence through their preselected candidates on the other.”

Australia/Israel & Jewish Affairs Council executive director Colin Rubenstein told The AJN it is “hard to fathom why the Australian Greens bother having a policy towards Israel when so many of its candidates proudly flout it”.

“A party that believes in a two-state peace for Israelis and Palestinians cannot also support candidates advocating for the anti-two state boycott movement, which seeks to effectively dismantle Israel,” Rubenstein said.

“[Greens leader] Richard Di Natale must come clean. Do the Greens stand by their own platform? Or do they back their candidates calling for a boycott against the only country in the Middle East that protects LGBTI rights, is truly democratic and is a world leader on many environmental indicators?”

Zionist Federation of Australia president Jeremy Leibler noted that Parissis had previously called Israel an “apartheid state” and published a graphic referring to the IDF as a “terrorist organisation”.

“These statements are not only factually incorrect but inevitably incite hatred and bigotry against the world’s only Jewish state,” he said.

“It is difficult to take the Greens’ repeated denials that they support BDS seriously when they refuse to disendorse candidates who have and continue to openly support the BDS movement.”