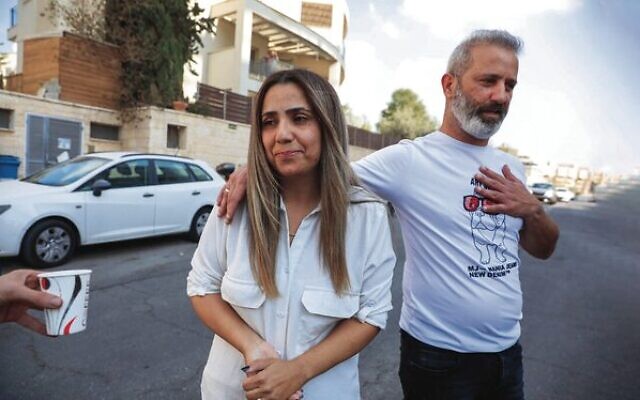 “How good it is that you came home. I am so happy to see you,” Bennett said while embracing the couple at his office in Jerusalem.

“I saw your prayers and was very moved,” he told Natali.

After arriving home last Thursday, Natali said that while she was detained, she could hear the muezzin’s call to prayer from a nearby mosque. “I closed my ears and shouted loudly – please God save me.”

The couple was arrested earlier this month after they photographed Turkish President Recep Tayyip Erdogan’s palace in Istanbul while on holiday and sent the photo to their family.

They were freed following intensive diplomatic efforts and returned to Israel.

Israel firmly and formally rejected the allegation that the Oknins, both of whom are bus drivers, were spies. Their colleagues dismissed the notion that they were involved in espionage as ridiculous.

Their return to Israel ended a saga that had involved concrete fears the pair would be in a Turkish jail for many years.

In a joint statement, Bennett and Foreign Minister Yair Lapid said they “thank the president of Turkey and his government for their

cooperation,” adding that President Isaac Herzog had also played a role in securing the couple’s release.

Bennett spoke with Erdogan last Thursday by phone to thank him for the part he played. In a statement, the Prime Minister’s Office said Bennett “commended the lines of communication between the two countries, which were efficient and discreet in a time of crisis”.

The delicate diplomacy to secure their release was complicated because the two governments do not have ambassadors in each other’s countries due to longstanding tensions between Ankara and Jerusalem.

According to Israel’s Channel 12, Erdogan had sought a public expression of gratitude from the Israeli leadership to help secure the Oknins’ release.

The report, which did not cite sources, said the Turkish leader was particularly interested in getting appreciative phone calls from Bennett and Herzog.

The call between Erdogan and Bennett was their first, as well as the first conversation between the leaders of Israel and Turkey since 2013.