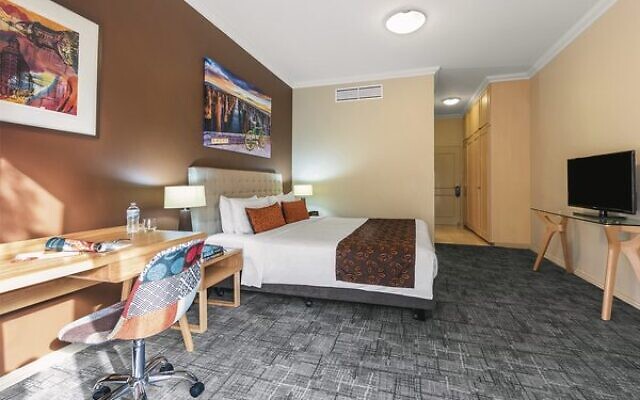 Enjoy a delicious breakfast on the balcony.

Kimberley Gardens Hotel was originally built in the 1980s and hadn’t received much attention until recent years. With new owners and new management, the hotel has been re-invigorated, with almost all rooms renovated and a range of new rooms created to suit everyone’s budget and style.

Hotel manager Warren Slabe explained that the “old corporate” furniture originally found in the rooms has been replaced with a more modern, sleek Scandinavian-style look, along with a lighter colour scheme.

Bathrooms have also been uplifted with new stone and frameless glass showers.

The renovations took more than two years to complete and included repainting, replacing carpets and mattresses in all rooms, and replacing furniture in the rooms.

“It is really a lovely, warm, inviting hotel, and the perception that it is still old and corporate is really wrong,” said Slabe. 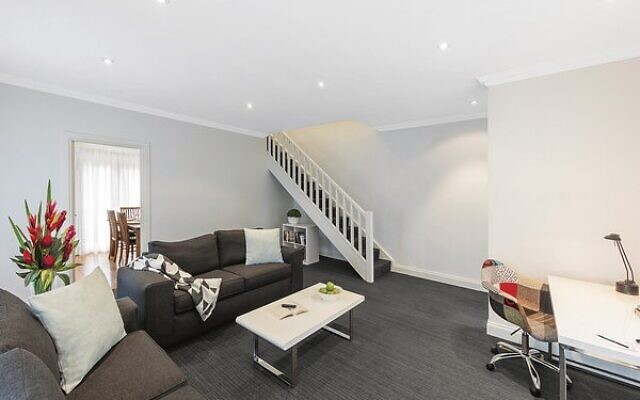 Villas include a lounge room and a handy desk-space if you need to work.

The hotel at 441 Inkerman Street, St Kilda has many regular guests from Sydney, including Kevin Koton, who is a frequent visitor. On his latest visit he stayed in one of the newly-created Superior Rooms.

“I love that room,” Koton said. “It has been renovated to a very high standard – it’s almost like a five-star room.”

Slabe said the hotel created a small number of Superior Rooms for guests with a slightly larger budget who really wanted a more luxurious experience.

Kimberley Gardens has a range of rooms, starting with Hotel Rooms with queen-sized beds, through to the Superior Rooms and Deluxe Spa Rooms, Apartments with kitchens and even one room set aside as an Executive Room/Honeymoon Suite.

Spa Rooms are popular because they have king-sized beds and a marble bathroom with a corner spa bath, but for an extra special occasion the Executive Room is the ultimate.

The family-sized Villas are ideal for longer stays and for larger families. They are often booked by families doing renovations on their homes or visiting for simchas from interstate or even distant locations such as New York, London and Johannesburg.

The Villas were completely renovated in 2017 and are meticulously maintained by Slabe and his housekeeping crew.

“The entire hotel can buzz with a feeling of excitement when it is full,” Slabe said. “Often there are multiple events happening simultaneously and we have such a vibe, it’s really uplifting.” 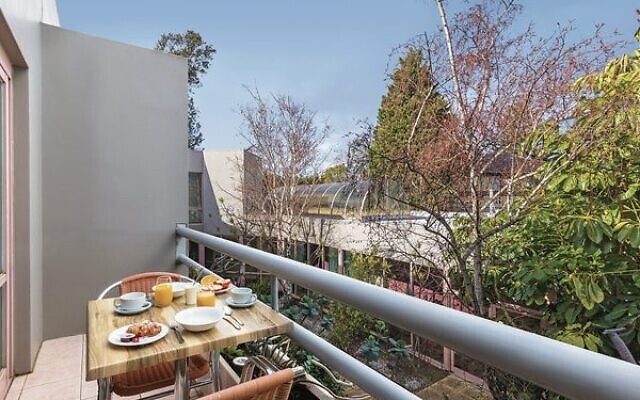 Enjoy a delicious breakfast on the balcony.

However, during the lockdowns of the past 20 months and no international arrivals and few from interstate, the hotel was very quiet.

“It was hard being here all alone at times as all my staff had been stood down,” said Slabe.

“But since late last month the regular guests are returning and the weddings are picking up again.

“And we also have a range of new guests who have stayed on and off during the pandemic.”

Among the hotel’s most frequent Sydney visitors are Norman and Daphne Simon, who stay in the same Apartment every time.

“The hotel really looks after us, it’s like a second home, and they somehow manage to always put us in the same Apartment which we love. We would never stay anywhere else in Melbourne,” said Norman Simon.

The hotel recently upgraded the Wifi to high-speed broadband and added a range of toys, games and books in the lobby for children to play with.

“Families are critical to our hotel,” said Slabe. “It’s important that kids have entertainment. Yes, the indoor heated pool and spa are always a hit, but sometimes parents need to relax and let the kids play on their own, so that’s why we added so many new games and toys.”

During the pandemic, the hotel also upgraded the gym with new equipment – perfect for a good workout.

The hotel is nestled in two acres of lush gardens.

Kimberley Gardens, which has a restaurant and function centre, is Mehadrin Glatt kosher under the supervision of Kosher Australia.

So, what really makes the hotel unique and inviting? It’s a family-owned boutique hotel and the staff understand the nuances of Jewish guests and the requirements for Shabbat and kashrut.

The hotel is offering a 20 per cent discount to AJN readers until December 31, 2021, with some basic Terms and Conditions.
Visit kimberleygardenshotel.com.au