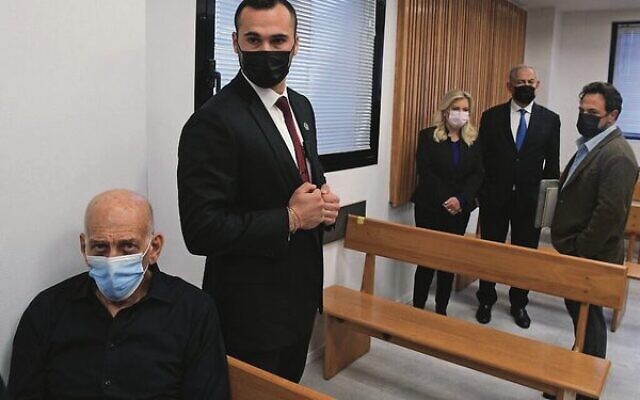 FORMER prime minister Ehud Olmert this week rejected out of hand the idea that he could apologise to Opposition Leader Benjamin Netanyahu for calling him and his wife and son “mentally ill”, arguing that it is a widely held opinion.

Olmert gave a series of interviews hours after the first Tel Aviv Magistrate’s Court hearing in the Netanyahu family’s libel case against him.

In May, Netanyahu’s family filed a defamation lawsuit against Olmert for calling the then-prime minister, his wife Sara, and eldest son Yair “mentally ill” in interviews. The suit seeks NIS 837,000 (some $AU372,000) in damages for Olmert’s “obsessive efforts to harm their good name in public, out of jealousy and deep frustration”.

In attendance at Monday’s hearing were Olmert and his lawyer, as well as Benjamin, Sara and Yair Netanyahu, and their attorney. The session ended with the sides refusing to reach a compromise, despite being urged to do so by the judge. The case will therefore continue in court.

Asked about whether he would issue an apology, Olmert said later in the day in an interview with Channel 12 news, “Of course not. It hasn’t even been considered. There’s no chance that this will happen – no apology nor anything that resembles it.”

Olmert added that what he had said about Netanyahu was mild in comparison to other comments made in recent years about his fellow former PM, saying he was “amused” that of all the comments, the Netanyahus decided to press charges over his.

“Does someone seriously think I’m a psychiatrist? Of course I expressed an opinion, one that is very popular among the public regarding the family’s conduct – and there have been countless revelations relating to that,” he argued.

“The family’s conduct on various aspects matches the opinion [I expressed] – their behaviour isn’t normal,” Olmert said in a separate interview with Channel 13 news.

He claimed he had consulted experts before making the remark.

“Mental illness is an illness, it requires treatment and mentally ill people should not be offended,” he said. “I just don’t want [the Netanyahus] to be running the country and making decisions on the most fateful issues.”

In a further jab at the Netanyahu family, Olmert said, “If there is something they are good at, it is demanding money, especially from others.”

That was a reference to one of the ongoing corruption cases against Netanyahu in which he is accused of receiving lucrative illicit gifts from wealthy benefactors. It also referred to Netanyahu’s failed attempts to have his multi-millionaire cousin Nathan Milikowsky cover his legal fees.

At Monday’s hearing, Olmert was asked by judge Amit Yariv what he had based his comments on, and answered, “I followed their actions, I heard recordings of the family, I conferred with experts and people who are associated with them and know them well. They described to me behaviours that are popularly seen as abnormal, crazy behaviour.”

Netanyahu attorney Yossi Cohen said, “I don’t understand how a man can calmly write that Sara Netanyahu was in a treatment hostel. We don’t have an issue with Mr Olmert; he’s been through difficult things. But a family is sitting here that in my eyes is one of Israel’s finest, and they have to hear that a former prime minister – who by the way does not have a clean past – calls them mentally ill?”

Cohen at one point said that “in another country, Olmert would have been arrested” for his comments. To that, the judge responded, “Thank God we’re not in that country.”

In two interviews last year, one with Channel 12 and another with the news site Democrat TV, Olmert levelled criticism at Netanyahu and said, “What is irreparable is the mental illness of the prime minister, his wife, and his son,” referring to Yair Netanyahu.

“They are in need of psychiatric treatment,” Olmert said.

Neither Olmert nor Netanyahu is a stranger to court.

Olmert preceded Netanyahu as Israel’s prime minister, ending his term before being formally indicted on corruption charges. He was convicted of fraud in 2014 and served 16 months of a 27-month prison sentence.

Netanyahu denies all allegations against him, and says the charges were fabricated by a biased police force and state prosecution service, overseen by a weak attorney-general, in league with political opponents and the media.

Netanyahu and his family have also been involved in several libel cases in recent years, both as defendants and as plaintiffs.