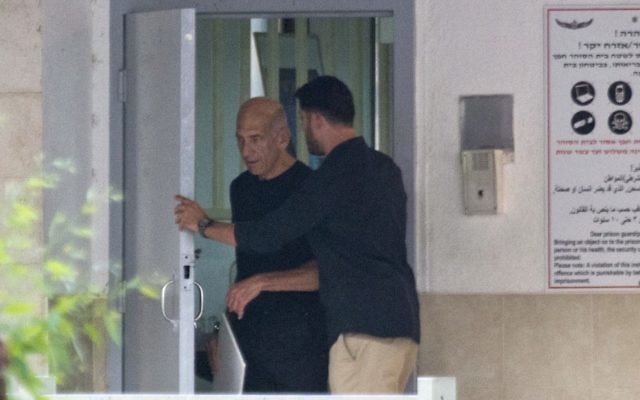 It is nine years since the career of one of Israel’s most promising prime ministers crumbled as he was embroiled in allegations about his conduct a few years previously when he was mayor of Jerusalem and trade minister. He was subsequently found to have accepted bribes from real estate developers.

Almost immediately after his release, Olmert went to an upscale Tel Aviv mall, where he was photographed shopping, in images released by the mall to the media.

He seemed to be signalling to the country that he has no intention to lie low. Olmert is expected to try to redeem himself in the eyes of the nation by releasing an autobiography – hundreds of pages which he wrote in jail. The book is presumed to highlight his political achievements and seek to present these, rather than his conviction and prison stint, as his legacy.

But a political comeback won’t be possible any time soon as he is banned from holding public office for the next seven years because of his conviction. He is even barred from galvanising political support through interviews, as his parole conditions stipulate that he mustn’t talk to the media.

On Tuesday, President Reuven Rivlin’s office announced that Olmert’s restrictions would be limited to time served, which will allow him to travel abroad and will not require him to meet weekly with an Israel Prisons Service social worker.

According to the announcement, “the clemency is dependent on Olmert not committing another crime until the end of his original sentence”, next May.

Upon his release, Olmert’s told Ynet that the ex-prime minister would volunteer at two Israel food recovery NGOs, Ezer Lemarpe and Leket. The volunteer work is not a condition of his release.

As Olmert left prison, another Israeli politician entered. Basel Ghattas, of the predominantly-Arab Joint List faction, started a two year sentence on Sunday for using his privileges as a politician to smuggle mobile phones and SIM cards to Palestinian security prisoners held at an Israeli jail.

Ghattas signed a plea bargain which led to his imprisonment, but is unrepentant as he claims that Palestinian prisoners are badly treated by Israel. “I will leave prison in two years upright, with a raised head,” he said just before starting his term.