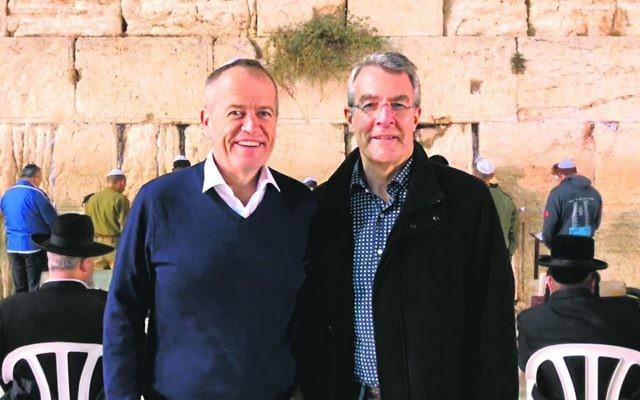 Speaking with Peter Kohn, Jewish ALP frontbencher Mark Dreyfus shares his visions for Australia and his hope of becoming a senior minister in a Shorten government.

AS Mark Dreyfus and his assistant walk into a Caulfield cafe for our AJN interview, an ALP election ad serendipitously blares out over the radio. It’s a reminder, if we need one, that the election in which the ALP frontbencher and Member for Isaacs, hopes to return to the government benches is only days away.

Perth-born and Melbourne raised, son of iconic composer George Dreyfus, a Scotch Collegian who went on to study law, become a barrister, and embrace Labor politics, Mark Dreyfus entered Parliament in 2007, in the election at which Kevin Rudd took John Howard’s mantle and Labor last returned to power.

In 2013, the lawyer with fond boyhood memories of watching his grandmother light the Shabbat candles and recite the brachot achieved his dream of becoming the nation’s attorney-general in the government of Julia Gillard. It was a milestone for the King David School parent and father of three and for his wife Deborah Chemke.

We order coffees – and Dreyfus starts to field my questions. The ALP’s most senior Jewish figure – whose closest rival in his bayside Isaacs electorate is an ex-Liberal who has been disendorsed by his party for an anti-Muslim rant but remains on the ballot – sounds self-effacing but calmly primed for the sprint to the May 18 finish line.

In the era of the Pittsburgh and San Diego synagogue attacks, how does he think a Bill Shorten government would act on funding Jewish communal security, and would it honour the $55 million pledge for community security for Australian religious schools and places of worship announced by PM Scott Morrison a few weeks ago?

Dreyfus emphasises school security funding began under Rudd, and would continue under a Shorten government. He recalls standing with Rudd at a Melbourne school before the 2007 election, announcing the first school security funding policy, which was implemented by the new government the following year. “It’s delivered security for Jewish schools – and a small number of non-Jewish schools – across Australia ever since. We agreed with the extension of the program to cover current expenses, such as the employment of security guards.”

He is critical of a key aspect of the $55 million rollout, announced after the Christchurch mosque massacre – its assessment on a first come, first served basis. “That is never an appropriate basis for handing out Commonwealth money. It should be assessed on a security risk basis, that’s what Labor will do.”

I put to him that Jewish Australians, who are watching the spiral of the British Labour Party into a mire of antisemitism, are nervous about what Labor in power might do here. What would he say to these voters? “I would invite Australian Jewish voters to look at the absolutely rock-solid support that the Australian Labor Party has provided to the State of Israel since before independence … I look with real concern at what has occurred under [British Labour leader] Jeremy Corbyn … there’s not the slightest sign that anything similar could occur in the Australian Labor Party.”

But what about the pronouncements of Labor figure Bob Carr and other forces, some with an eye on the electoral map? Says Dreyfus, “Bob Carr is not a member of the federal parliamentary Labor Party and is not going to be.”

“I cannot overstate Bill [Shorten]’s personal support for Israel. I was with Bill and [his wife] Chloe for the centenary of the Beersheba assault and it was Bill’s fifth or sixth visit.” As to deputy leader Tanya Plibersek, who during the 2000-04 intifada called Israel a rogue state and its then PM a “war criminal”, has since rethought her views, and has been on a private holiday to Israel with her children to learn more, he pointed out. Penny Wong, who would be foreign minister, is “a very strong supporter of Israel … of the peace process and of a two-state solution”.

But I put to him a question often heard in the Jewish community – can Labor match the Coalition’s support for Israel? Dreyfus attacks PM Scott Morrison’s “false promise” of moving the Australian embassy to Jerusalem. “We thought the conduct of the PM to gain domestic political advantage out of what is a complex international issue was shameful. To have made the announcement, as he did, not even in the course of a general election, but in a naked attempt to win the support of Jewish voters in Wentworth … was quite wrong.”

And he pans the outcome – “which has not resulted in the moving of the embassy [but] of some inexplicable trade office” in Jerusalem. “None of the posturing by Scott Morrison has assisted Israel or assisted Australia in the least,” he declares.

But what about the ALP’s decision at its December 2018 conference to allow a future ALP cabinet to unilaterally recognise a Palestinian state? “Our position remains as it has been for many years, that we are committed to a two-state solution,” says Dreyfus. Moreover, he bristles at what he sees as “that ‘we-are-stronger-than-you’ argument [in support of Israel]”, claiming it is not in Australia’s or Israel’s interests. 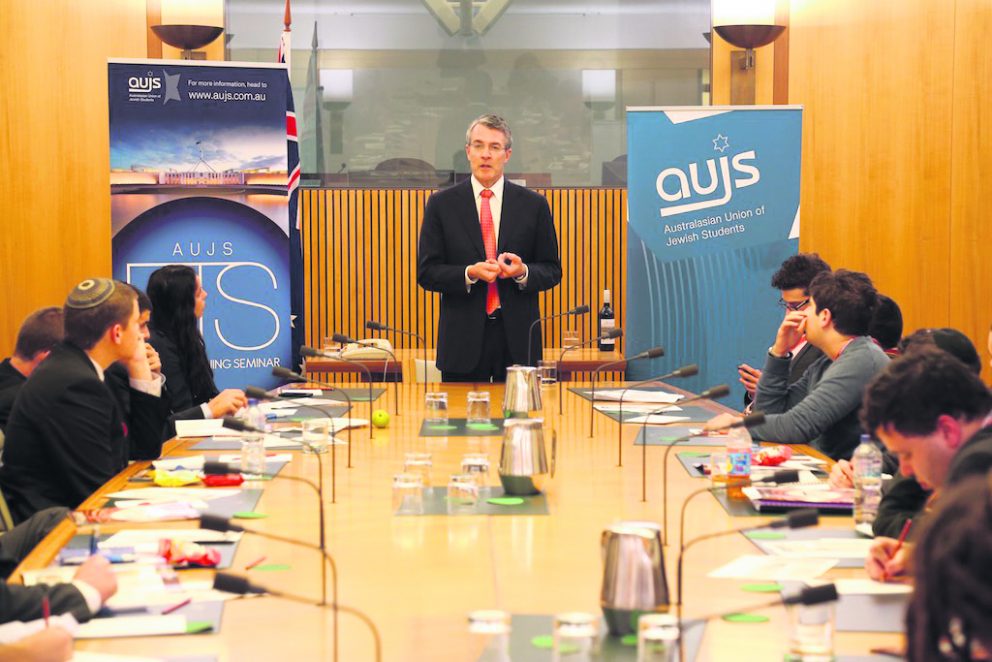 We turn to Jewish schools again – do they have something to fear from Labor when it comes to laws prohibiting the employment of teachers who will impart the school’s religious and cultural values to students?

Dreyfus says that despite news reports, Labor’s position that it will remove exemptions in the Sex Discrimination Act that allow discrimination against LGBTIQ students and staff is not new.

Labor would consult widely about the way these exemptions should be removed, taking into account the right of schools to employ teachers who will teach and, while on duty, act in accordance with the school’s values. He concedes it is “a delicate balance” between LGBTIQ rights and protecting religious freedoms.

In Melbourne’s Jewish community, a lot of recent table talk has been about Labor’s pledge of a $5 million feasibility study into bringing Mount Scopus College in Burwood into the heart of the community in a site-share with Caulfield Hospital. As the senior ALP figure who flanked Macnamara candidate Josh Burns at last month’s announcement, Dreyfus sees it as “an amazing possibility” involving Mount Scopus, Alfred Health (Caulfield Hospital) and Deakin University. He lauds Burns as “a fantastic candidate” for driving the -decision to propose the study.

Reminded that other Melbourne Jewish schools are demanding some inclusion in any resource-sharing related to the proposal, Dreyfus says he and Burns have already spoken to other schools, and that the study will look at all kinds of scenarios. 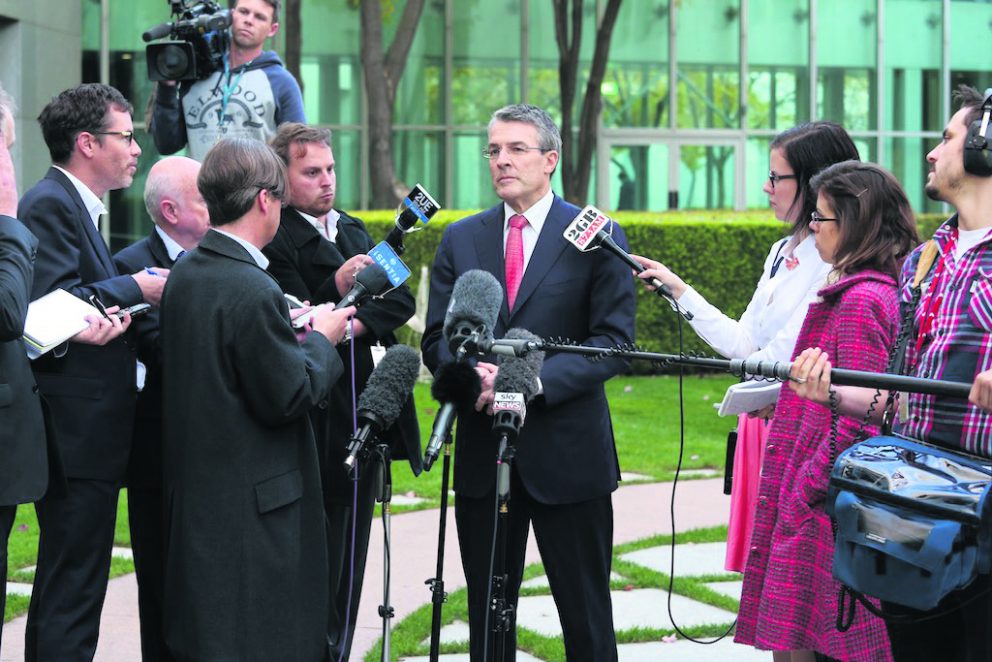 Finally, as coffee cups are drained, I ask the question that has to be asked: Is Dreyfus pondering ever becoming prime minister? After all, depending on political fortunes, he could become Australia’s first Jewish PM. The response is a surprisingly firm “no, no, absolutely no. I did not go into this to be PM … I went into politics thinking I could become a senior minister, and I very much hope that after the 18th of May, I’m able to be a senior minister again.

“I think that not enough people understand the idea of serving. Not everybody has to lead. And in any event, cabinet ministers lead in their portfolio areas. You don’t have to aspire to the top job to be in politics.”