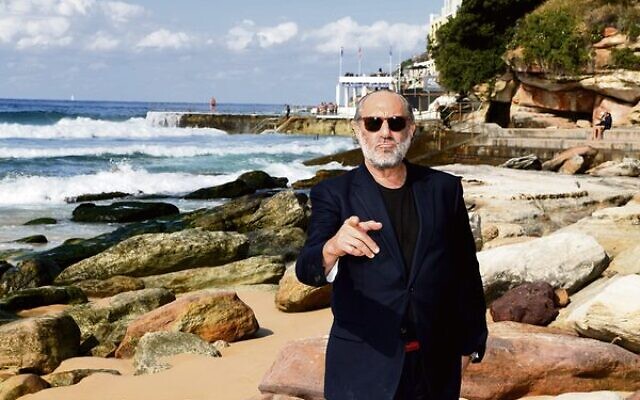 Gutman is the man behind the dark glasses and in-your-face humour. He’s known to unsettle his audience, to make them feel uncomfortable. In his words, he “deals in chutzpah”.

He’s also the man behind Australiana which remains Australia’s best-selling single. Ever.

“Australiana was a collaboration between me and Billy Birmingham,” Gutman explains. Birmingham, of course, is known for his record The Twelfth Man, impersonating and satirising Richie Benaud, Bill Lawry and Tony Greig.

“I started doing a few gags of his, I would try out stuff, and we would come up with things based on this and that. It was an organic routine that grew over a couple of years really working together.”

Gutman is perpetually on tour. He’s known for moving between gigs in backwater pubs, where he tries gags out, and legendary comedy hangouts all over the world.

“The only time I’ve ever stopped is during COVID when I was in intensive care. And now I’m on life support,” he joked, before going on to sing On the Road Again as he launches into talk about his current plans.

I like being on the road. I love it. It’s therapeutic. There’s nothing better than the wind in my hair, or lack of hair. It’s a really great experience.

Each show is completely improvised, which means Gutman must rely on his ability to read a room. It also means that each show is different to the one before.

“If it’s a Jewish crowd, it’s always a really Jewish show, a bit like Larry David these days,” he laughed.

Throughout the two-hour show, Gutman does admit that he will upset a few people, but that’s to be expected. He says his ability to read the room and, ultimately, his ability to adapt his show, has all been honed by experience.

“I’ve been doing this since 1981. I’m just good at it because I’ve been doing it for so long. I mean, even Nicole Kidman has improved,” he laughed, poking fun again at anyone and everyone. “After 50 years she actually looks like she’s confident.”

“But that’s what happens with a job in entertainment. If you have talent, and unfortunately not many people do, but if you have talent combined with experience, the ability to read a room is virtually a subconscious thing.”

Despite the dark glasses and ostentatious nature of his shows (yes, that’s where he gets the name from), Gutman says his adopted persona is a defence mechanism. He’s the son of a Holocaust survivor and the father of two daughters. He’s an intellectual who can chop and change his act depending on the people in front of him and the world around him.

But he says, doing shows for the Jewish crowd is a bit like coming home.

Gutman is now touring again and plans to tour all year all over the place.

“I’m relentlessly on tour because I’m a handsome guy. I really, really love what I do.”