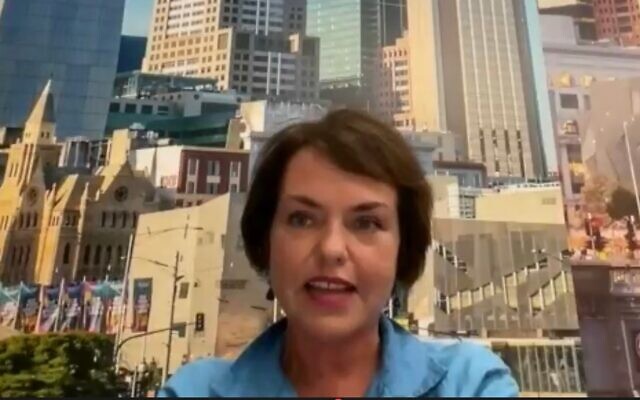 COMMUNAL  leaders have expressed their shock and sorrow after Senator Kimberley Kitching passed away from a heart attack yesterday at the age of 52.

Deputy chair of the Parliamentary Friends of Israel (PFI), just last month she and PFI chair Eric Abetz slammed the Amnesty report branding the Jewish State an apartheid regime, claiming it was “littered with errors that rehash discredited claims from other biased reports”, and adding, “It’s wrong in detail and disturbing in its intent.”

And in January, Kitching, a Labor Senator for Victoria, took part in a Zionist Federation of Australia (ZFA) commemoration for International Holocaust Remembrance Day during which she lauded ALP icon Herbert Evatt’s role in garnering international support for the establishment of the State of Israel in the wake of the Shoah, and noted,  “The political spectrum is not linear, but rather it’s circular, and the far left and the far right meet … and I think that’s certainly the case with antisemitism”.

Haling Kitching as “ an incredibly warm, intelligent and passionate person with so much more to give this country,” ZFA president Jeremy Leibler told The AJN, “She was a dear friend of the Australian Jewish community and Israel and will be dearly missed. I send her family and friends my deepest condolences.”

The sentiment was echoed by Executive Council of Australian Jewry co-CEO, Peter Wertheim, who said the late Senator was “one of the best friends the Jewish community has ever had in the ALP”.

He added, “I consider it a privilege to have worked with her from the time she entered the Senate in 2016.  She combined a sharp intellect with immense personal charm, and brought a genuine depth of knowledge to Foreign Affairs, Defence and Trade issues in particular.  We especially revered her as a fearless defender of the State of Israel, with a passion and depth of knowledge  that was unsurpassed among her colleagues.”

Wertheim further noted, “Kimberley was also an Australian patriot in the most meaningful sense of the word … Her passing is a terrible loss not only for her family but for the whole country.  We will certainly miss her. We extend our deepest sympathies to her husband Andrew.  May her memory be a blessing.”

“We send our condolences to her family, friends and colleagues. May her memory be a blessing.”

Stating that “Senator Kitching had an outstanding record as a significant public servant across all three jurisdictions in our country,” Zionism Victoria president Yossi Goldfarb said, “She was a solid friend of our community and of Israel and will be remembered for her integrity, fairness and impressive logical mind.

“I send my condolences to her family, loved ones and colleagues. She will be missed. “

Reaching out across the party divide, Treasurer Josh Frydenberg said he was “Deeply shocked and saddened”.

Describing Kitching as “A warm, loyal, decent person of real conviction who always strongly argued her case,” he added, “Kimberley had genuine friendships across the political aisle, and will be greatly missed.”

Expressing his “complete shock and sadness at the tragic loss of my friend,” Labor Member for Macnamara Josh Burns said, “Kimba was charming, smart and probably the toughest person in the Parliament.”

“She was a formidable Labor warrior,” he continued, “and had so much more to give.”

Julian Leeser, Liberal Member for Berowra, said
Kitching “was among the brightest and most principled parliamentarians I have come across.

“A Labor warrior with a passion for western civilisation and a great sense of humour. The Parliament and the country are poorer for her passing.”

NSW Shadow Minister for Police and Counter Terrorism and deputy chair of the NSW Parliamentary Friends of Israel Walt Secord said he had known Kitching for almost 18 years.

“I first met her at an Australia-Israel Chamber of Commerce business lunch in 2005 in Sydney; she was a whirlwind,” he said.

“She was at a table hosted by Jeannie Pratt, the wife of entrepreneur and philanthropist, Dick Pratt.  Kimberley Kitching spoke with intellect and passion about Israel, the Jewish community and Judaism. I was absolutely startled by the breadth of her knowledge and understanding.

“She will be sadly missed. The Australian Jewish community and Israel has lost a true and unwavering friend.”