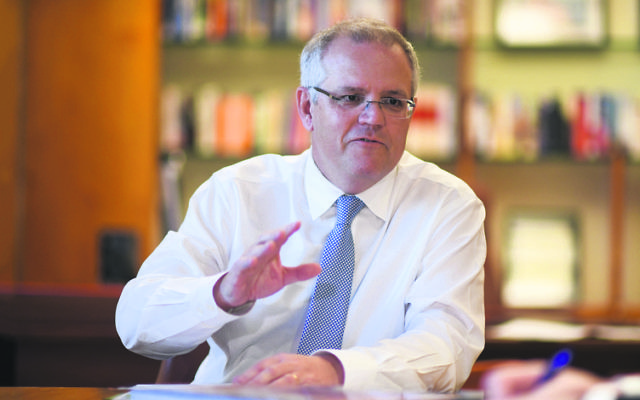 In his first interview with The AJN since becoming Prime Minister, Morrison spoke about a range of topics including his 2003 visit to Israel, security and schools funding, Malcolm Turnbull’s legacy and more.

On Israel and the Middle East, he said he would continue where his predecessor Turnbull had left off in terms of the Australia-Israel relationship.

“It’s many years since I was in Israel back in 2003, so I would welcome an opportunity to return.”

Speaking about that 2003 trip, which ironically was in a group with political opponent Bill Shorten, the Prime Minister said he walked away “with a very healthy respect for Israel’s position” to do what’s in its best interests as a nation.

But he ruled out following the United States’ lead in moving its embassy to Jerusalem, saying “we don’t want to do anything that disrupts” progress towards a two-state solution.

“It’s not so much having any philosophical or historical objection, I understand the US’s decision. But Australia will always make decisions based on its assessments,” he said.

He also reaffirmed the Turnbull government’s position on the US abandoning the Iran nuclear deal. “The question is what it would be replaced with and if it makes things any safer,” he said.

“Australia and the US are the closest of allies when it comes to support for Israel, but that doesn’t mean that in every specific instance we will do exactly the same thing.”

On local issues, the Prime Minister spoke of his commitment to ensuring the Jewish community is safe, highlighting that $1.4 million has been pledged for security at communal institutions and $7.4 million for security at Jewish schools.
Having grown up in Sydney’s Eastern Suburbs, he said, “I’m used to seeing security guards outside synagogues. As a person of faith, the idea that you have to have security guards outside your places of worship, that really grieves me, but I understand why it’s necessary.”

The Prime Minister also addressed his independent schools funding deal announced last week, saying, “The reason I send my kids to a faith-based school is I want my kids to be educated in an environment which is consistent with my and Jenny’s beliefs. I know there are a lot of parents, particularly Jewish parents, who want to do the same thing.”

Asked whether the Coalition would seek to change Section 18C of the Racial Discrimination Act in the future, he said “I’m not looking at it” but said he would act on protections for freedom of religion.

Morrison also said both he and Turnbull were confident Liberal Wentworth candidate Dave Sharma would “uphold Malcolm’s very high standards in the community”.