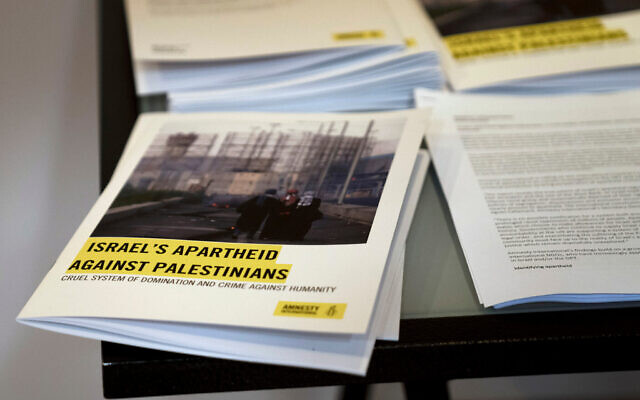 THIS is an appalling report that should be rejected by everyone who seeks Israeli–Palestinian peace. It makes a mockery of both objectivity and the victims of apartheid South Africa, who suffered under an evil regime that bears absolutely no resemblance to the Israeli–Palestinian conflict.

At its core, the Amnesty report is not about Palestinian rights or the occupation, it’s about Israel’s existence. Given Amnesty calls for an end to the Jewish majority of Israel, the inescapable conclusion is that Amnesty has come to the position that Jews, alone in the world, may not exercise the right to self-determination.

The report is a one-sided attack on Israel, where the conclusion of ‘apartheid’ was predetermined, and aspects of the conflict were selected on the basis that they could be made to fit that conclusion. If they couldn’t be twisted or decontextualised in a way to fit the apartheid lie, they were ignored.

The full participation of Palestinian citizens of Israel is ignored or down-played in the report. That Israel’s governing coalition has an Arab party, that there are Arab cabinet members, Arab High Court justices and more are all ignored by Amnesty, because they are unfortunate truths that would prove the lie of Amnesty’s claims.

AMNESTY’S pronouncements on Israel are driven by a pathological hatred for the Jewish State.

This is betrayed by numerous public statements by senior figures at Amnesty, which have included calling Israel a “scum state” and its democratically- elected government, “rogue”. A researcher in Amnesty’s Middle East branch admitted she wanted Israel “gone”.

The AI report is a polemical diatribe in similar vein, not a good faith analysis, and should be dismissed as such.

The report denies the right of the Jewish people to national self-determination, characterising it as racist, yet is hypocritically silent about the fact that the Palestinian Authority and Hamas define “Palestine” as “Arab” and “Islamic.” Hamas forbids any Jew from living in Gaza, but Amnesty is silent about that too. There appears to be no way Israel could defend itself and its people in a way that would be acceptable to Amnesty International.

IF this new report was not so dangerous it would be laughable. Despite the fact that Israel extends full civil rights to all its citizens, Arab Israelis play leading roles in all aspects of Israeli society, and an Arab party plays a vital role in Israel’s current government, Amnesty insists that Israel has operated a “system of apartheid – wherever it has exercised control over Palestinians’ lives since 1948”.

The twisted and legally absurd definition of ‘apartheid’ it employs – which basically makes any state with a national ethnic identity, or any lingering problems with discrimination against minorities, ‘apartheid’ – would damn the vast majority of the world’s countries as apartheid states if applied objectively.

But of course it is not applied objectively – and that is exactly the problem. As a whole series of scandals over recent years have made apparent, Amnesty, like many other well-known NGOs, has been taken over by ideological extremists for whom the supposed great evil of Israel’s very existence is a matter of faith.

I CALL on Amnesty Australia to reject and disassociate itself from this hateful and malicious report, which is riddled with slanders.

As Jews in Australia are under sustained attack, by demonising the only Jewish State in the world, labelling it a genocidal apartheid regime and castigating anyone who supports Israel, Amnesty UK is pouring fuel on the flames of raging antisemitism, and this is dangerous since it will be Jews who will pay the price for this poisonous, biased document.

There are no pathways here for a negotiated peace settlement to the conflict and co-existence, only vicious accusations, distortions and double standards.

AMNESTY’S conclusion on apartheid is wrong. It changes the term to suit their contention. It creates an absurd comparison between democratic Israel and apartheid South Africa when the truth is that Arab citizens of Israel enjoy full democratic rights.

This is a one-sided report that undermines its credibility by solely blaming Israel for the situation on the ground.

Any objective observer of the conflict would acknowledge that peace will only be achieved through direct negotiation and concessions on both sides.