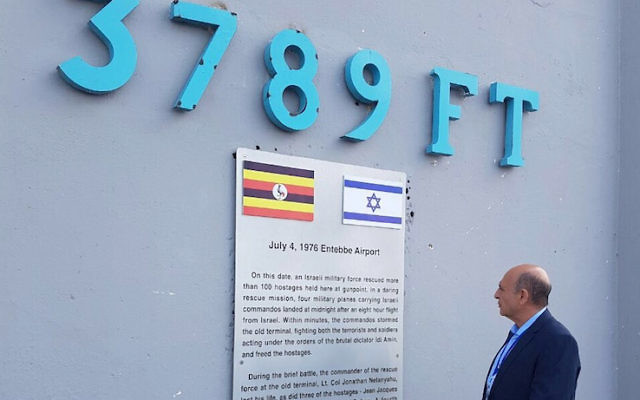 Shaul Mofaz at the memorial plaque at the Entebbe Airport where he was part of a raid that saved more than 100 Jews held hostage by terrorists.

THE deputy commander of the Israeli raid in Entebbe, which saved the lives of 102 hostages 40 years ago, will come to Australia in September to speak at Jewish National Fund (JNF) functions.

Shaul Mofaz, who also served as the Israeli Defence Forces (IDF) chief of staff from 1998 to 2002 and as Israel’s defence minister from 2002 to 2006, will speak in Sydney, Melbourne and Perth.

Mofaz, who told The AJN this week that he is excited to come to Australia, reflected on how he felt when he returned to the airport in Uganda last week where the raid had taken place.

“This time, senior Ugandan officers and an honour guard welcomed us, whereas 40 years ago they fought us,” he said.

“Signs of the battle are still etched in the walls of the control tower; the bullet marks made by the Israeli rescue force.”

He said Operation Entebbe exemplified the Jewish principle of “Kol Yisrael arevim zeh la-zeh”, which is that all Jews are responsible for each other.

“We paid a dear price,” he said, referring to Yonatan Netanyahu and the four hostages that died, “but Israel kept its values and won eternal glory”.

“As I stood at the ceremony at Entebbe, I felt emotion and great pride in being part of this Zionist operation.”

JNF Australia CEO Dan Springer said that since the establishment of the State of Israel, a handful of seminal events have transformed Israel’s self-identity as a people and a nation, such as the operation in Entebbe.

“These events each began with Jews as victims, a role well-practised during a long Diaspora, and ended with heroic redemption, a role that a sovereign Israel now thrust upon her citizens,” Springer said.

“Alongside the Six-Day and Yom Kippur Wars, Entebbe was such an event.

“Those of us who are old enough still remember when we first heard news of the hijacking, the terrible foreboding as it unfolded and how we felt when the dramatic rescue was broadcast.”

Springer recalled that he was with his grandmother in Sydney, glued to the radio, when news of the raid was announced.

“I will never forget the tears that streamed down her face, tears of relief, tears of salvation and yes, tears of pride in our brave Israeli soldiers.

“In that moment, a lifelong commitment to Zionism was seared into a Sydney boy just about to become bar mitzvah.”

In 1976 an Air France flight en route to Paris was hijacked by Palestinian and German terrorists.

While more than half of the hostages were freed over the following two days, 94 Jewish and Israeli passengers, and the 12-member airline crew, were held captive, with support from then Ugandan president Idi Amin, until an Israeli raid freed the hostages.

Shaul Mofaz will speak in Sydney on Thursday, September 8. For more information or to book tickets, go to www.jnf.org.au/annualdinner or call (02) 9389 5466.