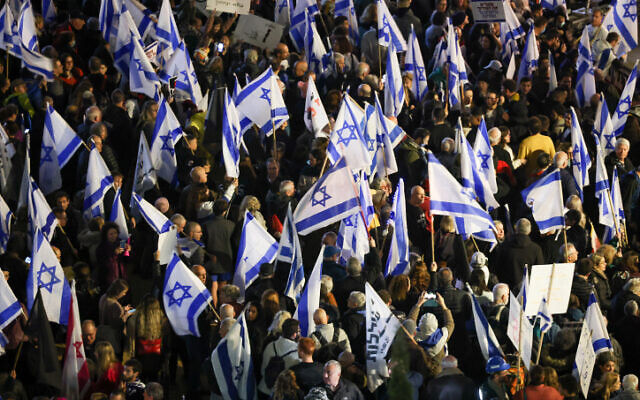 Thousands of people protest against the Israeli government at Habima Square in Tel Aviv, on January 14, 2023. Photo: Yonatan Sindel/Flash90

A week after 80,000 people thronged the streets of Tel Aviv on Saturday night, another mass protest against the government and its policies is slated for this weekend.

Smaller protests are also expected to take place in Jerusalem and Haifa and at other sites around the country. After skipping last week’s events, opposition leader Yair Lapid said Wednesday he would attend this weekend.

With clear weather predicted — after the last protest was beset by rain — organisers are hoping for an even larger turnout, potentially boosted by the bombshell High Court ruling this week declaring Shas chief Aryeh Deri as unfit to be a government minister.

The main protest in Tel Aviv will be divided, with one organiser, the Movement for Quality Government in Israel, sticking to Habima Square for the second weekend in a row while other organisers will be moving less than a kilometre away to the intersection of Kaplan and Begin streets.

“Faced with the threat of the collapse of Israeli democracy, we must be determined and show the government that we will not sit quietly,” said the Movement for Quality Government, saying that the two separate protest centres were due to an expectation that more people will attend this weekend.

“The masses who flooded [Habima] Square and the surrounding streets were just the beginning of a battle that will only get bigger.” 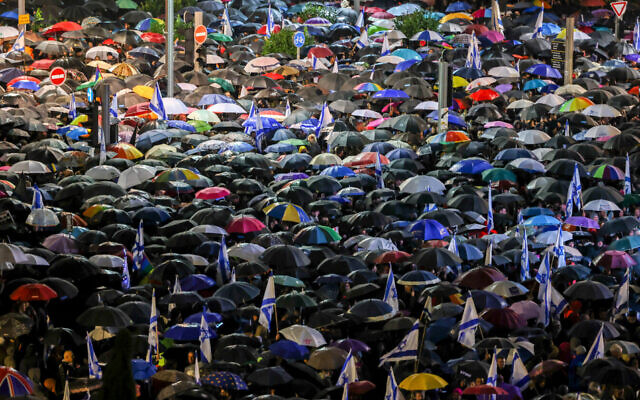 The Black Flag protest group said it would centre its efforts on Kaplan Street, and called on opposition politicians to show up.

“Following the attack on the judicial system over Deri’s disqualification, and the calls from within the coalition to disobey the ruling, the organisers of the demonstration are calling on the heads of the opposition parties to announce that they will come to the mass demonstration and stand at the head of the protest march,” said Black Flags in a statement.

The organising group said Thursday it had seen an uptick in interest in attendance following the High Court ruling.

Last weekend’s protest was focused on the government’s proposal to massively alter the judicial system, with plans to increase political control over judge selection and bar the High Court from exercising judicial oversight of Knesset laws and government policies.

Following the justices’ ruling that Deri could not serve as interior and health minister in the government, some coalition figures said they would not abide by the court decision or would seek to overturn it.

After the ruling, the anti-Netanyahu protest group Crime Minister called on the public to take to the streets in Tel Aviv, Jerusalem, Haifa, Beersheba and Modiin.

“We will scream ‘no to dictatorship,’” Black Flags said. “We will start there and keep going — until this bad government and the person leading it are brought down.” 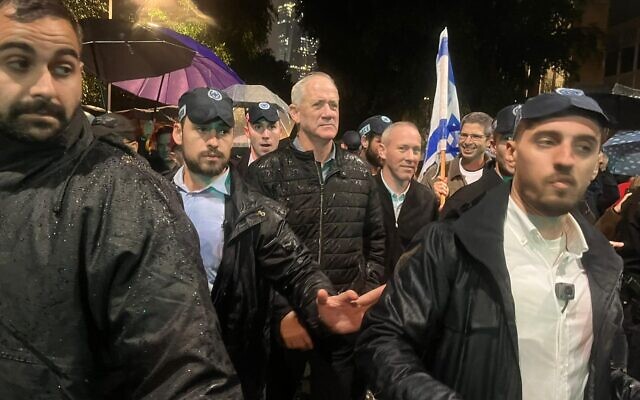 Many political figures, in addition to Lapid, are expected to attend the protest in Tel Aviv.

“We’re stopping the madness [and] fighting for the country in Haifa, in Jerusalem, in Tel Aviv,” the opposition leader said in a video posted to social media on Wednesday. “Come and protect our beloved country from democratic ruin. Yes, I’ll be there too.”

At the last rally on Saturday, police estimated that some 80,000 people gathered at Habima Square in Tel Aviv and the surrounding streets for the protests, while smaller demonstrations were held in Jerusalem and Haifa.

A day after last week’s protest, Prime Minister Benjamin Netanyahu brushed off the criticism and argued that the planned changes would strengthen democracy rather than hasten its end. He also maintains that the government is carrying out the will of the people.